For a previous post on this see Teach your kids American values! Take them to the West Bank to shoot terrorists
This posting contains a blog from Foreign Policy magazine and an article from Ceasefire. 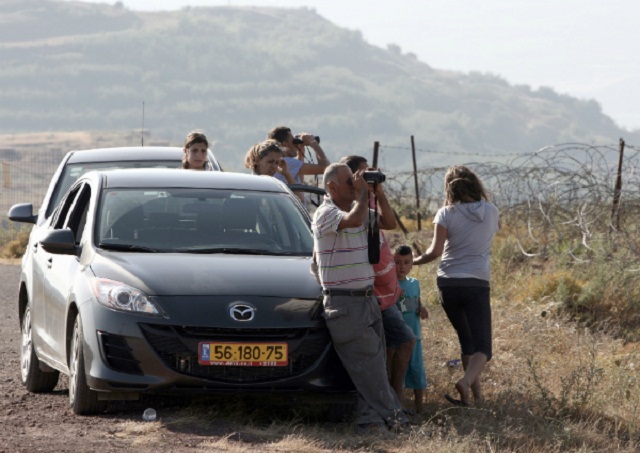 Tourists scanning the Golan heights for ‘terrorists’ and views of war. Photo foreignpolicy.com

Have you ever wondered what it’s like to be a terrorist-shooting sniper? Thanks to a program run by Jewish settlers in Gush Etzion, you too can spend a day beyond the Green Line learning how to take down extremist militants. As Yedioth Aharanoth reported recently, the experience allows tourists to “hear stories from the battleground, watch a simulated assassination of terrorists by guards, and fire weapons at the range.” Sharon Gat, who manages the Caliber 3 shooting range, calls the opportunity a “once-in-a-lifetime experience” that was “created due to popular demand,” and demand is certainly high among families. Enter Michel Brown, a Miami banker who brought his wife and three children to this warfare summer camp:

Upon entering the range, his five-year-old daughter, Tamara, bursts into tears. A half hour later, she is holding a gun and shooting clay bullets like a pro. “This is part of their education,” Michel says as he proudly watches his daughter. “They should know where they come from and also feel some action.”

By the end of the day, his trigger-happy son Jacob is confident that he can stop terrorist operatives with the best of them:

“This is an awesome experience. I learned how to stop a terrorist and how to rescue hostages. Now, when I find myself in distress, I will know how to deal.”

Tourists receive a certificate at the end of the experience, and Gush Etzion Regional Council president Davidi Pearl hopes that the program will turn the Gush into “a world-famous ‘tourist gem.'”

If the program continues to be successful, we may have a small army of child counter-terror operatives on our hands.

Israel’s Extreme Tourism: War and Occupation for Fun and Profit

In recent years a number of Israeli companies, many of them staffed by former soldiers, have attempted to promote Israel as a destination for extreme tourism with a military component. Matt Carr looks at the phenomenon and considers the overlap between entertainment, voyeurism and propaganda that has transformed Israel into a military themepark.

Israel has often used tourism as a conduit for propaganda and a means of legitimising and normalising the Zionist state, and it has historically demonstrated a canny ability to project itself as a destination for very different tourists. Once the kibbutzim attracted thousands of young volunteers every summer to take part in the collective endeavour of ‘making the desert bloom.’

Then there were the guided tours of the ‘Holy Land’, often with visits to the Occupied Territories of ‘Judea and Samaria’ thrown in. More recently, some Israeli companies have attempted to capitalise on Israel’s proximity to war and violence through the promotion of voyeuristic ‘extreme tourism.’

On the Golan Heights, Israeli tour operators are now taking Israeli and foreign tourists to vantage points overlooking Syria, where they can pause to take photographs and perhaps catch a glimpse of the ongoing conflict through binoculars.

For these tourists, the Golan frontier provides a safe vantage point where they can enjoy the conflict as a violent spectacle without being physically threatened by it. Israel’s proximity to ‘real’ war and violence is also a key attraction in the military-themed tourist activities organised by Israeli companies, which have attempted to turn Israel’s military expertise into a source of profit and a vehicle for propaganda.

Most of these companies have been formed by former military personnel and/or settlers, and their clients are overwhelmingly American. At the settlement of Gush Etzion near East Jerusalem, American tourists are flocking to a firing range called Caliber 3, where they charge and ‘pretend-shoot a terror operative’ consisting of cardboard targets of men wearing the Palestinian kefiyah.

As in the Golan Heights, proximity adds to the excitement. According to the Israeli news agency Ynet, part of the attraction for these holidaying counterterrorists lies in the fact that the settlement is located inside ‘the Green Line’ and therefore closer to the ‘real’ terrorists.

Participants include teenagers like 14-year-old Brian, whose Israeli instructor hands him a dummy gun and yells ‘Your mommy won’t be here to protect you, so stand up like a man. Are you ready to take out a terrorist?’

One 40-year-old Miami banker even allowed his five-year-old daughter Tamara to fire clay bullets on the firing range. At first the girl burst into tears when told to do this, but she soon picked up the knack, to the pride of father, who told the Ynet reporter ‘This is part of their education. They should know where they come from and also feel some action.’

One mother-of –three who brought her children along to the shooting range described it as ‘a fun experience for the whole family’ while a 65-year-old real estate agent told the Agence France-Presse how ‘We came to show the kids how the Israelis protect themselves and to have a good time.’

The sight of these ignorant, gimlet-eyed tourists in sunglasses and shorts, living out their paramilitary fantasies and teaching even young children to kill imaginary terrorists in a land under Israeli military occupation, is not the most edifying spectacle. But Caliber 3 does not only aim to thrill. Its activities are intended to combine ‘the values of Zionism with the excitement and enjoyment of shooting which makes the activity more meaningful.’ As the school’s director puts it ‘What is key here is not just shooting at targets, but hearing how we fight every day to protect the Jewish state.’

This dual education/entertainment function is crucial to the ‘once in a lifetime unbelievable modern warfare experience’organised by the extreme tourism company Lionops, formed by former Israeli Special Forces and former paratroopers with experience ‘in conducting live operations against Hizballa (sic), Hamas and in covert operations throughout the Middle East.’

Lionops begins its one-week holidays by taking clients to two vantage points overlooking Nablus, where they can ‘learn about the settlement conflict and war throughout Judea and Samaria and Israel in general’ from a guide who ‘lives in one of the settlements.’

From a ‘safe distance’, clients will ‘learn about the area and the dangers of combat in such a small and fortified area’. This introduction is followed by training courses in Krav Maga, the martial arts favoured by Israeli paratroops and Special Forces, whose techniques, as the tour organisers helpfully point out, ‘can be used anytime and anywhere’.

Clients also undergo basic and advanced weapons training ‘with unlimited ammo.’ They practice ‘hostage extraction’, sky-dive, and participate in combat exercises with paintballs. They also learn survival skills, and hone their martial arts training ‘ in an area that overlooks the coastal strip of Tel Aviv, during the sunset’ in what the company promises ‘will be a mystical experience for all participants.’

Clients are also subjected to ‘high stress exercises’ in which ‘prisoners’ are tied up with hoods placed over their heads by ‘specially trained interrogators who will be trying to get vital Intel from the participants.’

In addition, a ‘Special Forces reserve paratrooper’ will deliver a keynote speech dispensing advice on ‘content, methods and habits that help in coping with the impossible, and making correct decisions under difficult conditions.’

Participants might do better to learn some of these methodologies from Palestinians living under occupation, who have considerable experience in ‘coping with the impossible’and have often been the objects of considerably more extreme ‘high stress exercises’ that those offered by Lionops.

Unlike Lionops clients, these interrogations are not generally intended to promote ‘reassurance, self-efficacy, and personal empowerment.’ Nor do they culminate in a ‘final mission’, in which, as the organisers wittily put it, clients are ‘taken to one of Tel Aviv’s most exclusive nightclubs where they will have to survive the whole night.’

These tours are clearly targeted at the United States, and have an obvious appeal to gun-obsessed Americans terrified by crime and terrorism, for whom Israel echoes America’s own history of settler-colonialism and the ‘Wild West.’

In a country where many Americans regard Palestinians/Arabs/Muslims as nothing more than ‘terrorists’ to be shot and bombed, Israel’s extreme tourism enables clients besotted with war and Israeli machismo to indulge in the kind of fantasy violence that is normally associated with first-person shooter games and Hollywood films and TV series, in which an assortment of terrorist monsters are blown away by counterterrorist heroes.

As one satisfied Lionops customer describes it ‘The whole trip was adrenaline pumped, from start to finish. If you’re a fan of Call of Duty or Jack Bauer, this trip is meant for you.’

You can bet that it is. And in this sense the attraction of extreme tourism is not just due to Israel’s proximity to ‘the real’: it also reflects a fantasy version of terrorism and counterterrorism, in which the Israeli occupier is hero and victim and the incarnation of Jack Bauer – and tourists can vicariously participate in the great ‘war on terror’ that both the Israeli and American governments insist is being waged in both countries.

Subjugated, terrorised and controlled at every level, the occupied Palestinians are dangerous and exotic ‘terrorist’ props in the transformation of Israel into a military themepark, whose proximity serves to enhance the pseudo-authenticity of a holiday experience that, as Lionops puts it, aims to be ‘as real as it gets’ but is really not very real at all.

Matt Carr is a writer, blogger and freelance print and radio journalist. He is the author of My Father’s House, Blood and Faith: the Purging of Muslim Spain, and The Infernal Machine: an Alternative History of Terrorism. He blogs at www.infernalmachine.co.uk.