Yes, this is really apartheid

Jamal Juma is my hero.

I awaken to the near frigid temperatures of our apartment in Ramallah having once again slept in long underwear, a flannel nightgown, zipped up in my winter coat with hood and gloves, tucked under three layers of blankets, in front of a space heater. I think fondly of my first world New England pleasure – central heating – take a deep cleansing breath, and crawl into the requisite icy morning sponge bath (akin to a cup of coffee in the waking up department) and then scrounge around our leftovers for breakfast. Perhaps I could join some religious group that espouses living a life of deprivation, this being the Holy Land and all.

Jamal and Mena (from Grassroots International) return from Jerusalem, having driven from Ramallah to rent a car with Israeli plates which will make driving through checkpoints in the West Bank ever so much easier and also allow us to make the evening drive to Haifa in northern Israel possible. He has a Jerusalem ID with a license plate that allows him to travel in Israel ’48 (for lack of a better expression). You have to plan these things in this part of the world. Jamil Juma’  is the head of the ‘Stop the Wall’ campaign, which campaigns against the wall and settlements. Jamal has been arrested several times for his activism.

We move to the offices of Stop the Wall with its powerful political posters and murals: an old Palestinian woman plucks a tiny child off the barrel of a tank, a crowd of desperate Palestinians drag a large key reminiscent of Christ and the cross with the caption, Return is our Right and our Destiny, a series of maps documents the ever shrinking Palestine with a big question mark for 2013 and I could add 2017 as well, men crack the separation wall with pick axes, the cartoonist and political critic Naji Al-Ali’s Handala faces the separation wall with a mirage of a Palestinian village rising like an glowing orange moon, an angry face and arm rises above the wall breaking a chain, a crisscross of separation walls encase clusters of crowded blue houses, a helicopter hovers above and the caption in red reads: “To Exist is to Resist.”

Stop the Wall: Around 8:30 a.m. around 50 people gathered together with Michel Sabbah, former Roman Catholic Patriarch of Jerusalem, to pray under the bridge situated at the entrance of the valley, which the Israeli Occupation Forces confiscated at the beginning of last August, for the construction of a new section of the Apartheid Wall. Saturday 19th September 2015.

We settle in for a stupendous breakfast (what was I thinking?) of hot cheesy manakeesh, ka’ak (Jerusalem bagels) covered in sesame seeds, and falafel stuffed with onions and sumac. The conversation begins. Jamal is a powerful man with a gentle face, greying short hair, a great sense of humor and a tremendous amount of passion and personal knowledge about the Palestinian struggle. He comes from a Jerusalem Bedouin family before the catastrophe and was a shepherd as a young boy and was first beaten to a pulp by an Israeli soldier at the age of 16.

He explains that Stop the Wall started in 2002 with the beginning of the separation wall construction and the devastation and destruction of the environment and people’s lives that were a product of that project. During the Intifada (2000) the Israeli Defence Forces invaded the West Bank; due to the massive closures, mountains of garbage collected within cities that were unable to dispose of their waste and with the wall, the local conditions and access to food and income beyond the massive concrete blocks and barbed wire only deteriorated. 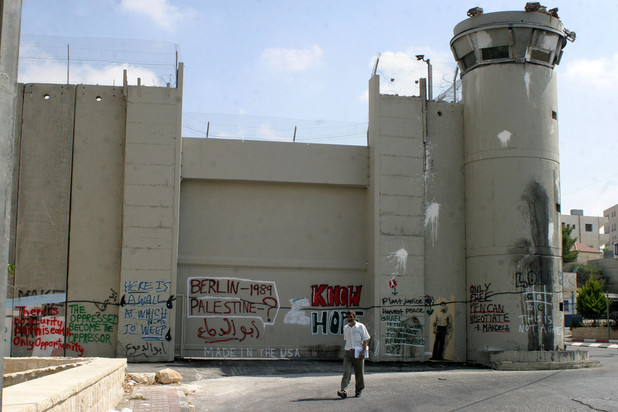 The wall near Bethlehem. Photo by Najeh Hashlamoun/ APA images

Jamal reviews the beginnings of international support and solidarity for the Palestinian cause. Over a decade ago, the World Social Forum in Durban, highlighted the realities of the killings and destruction of the Second Intifada and is famous for a huge fight over the central claim that Zionism is racism. For those well-meaning liberals who grew up on the post Holocaust national movement of the Jews for their rightful homeland mythology, that ignored the fate of the indigenous population, this was a tough piece of reality to swallow. The Israelis were beyond upset by the Durban conference.

Jamal talks about another international meeting where Shimon Peres became very hostile towards this alternative narrative. University and intelligence students wore tee shirts that said, “Don’t let the Palestinians hijack the conference like in Durban” and Palestinians at the conference were aggressively attacked.

He talks about an experience at another international conference in South Africa after the Jenin massacre in 2002 where the Palestinian booth was very popular, festooned with national flags and ironically located across from the Israeli booth. At one point two Israelis attacked Jamal, grabbing his keffiyeh. He can be an imposing figure and he made it quite clear to them that he was not intimidated and would not be silenced. The South Africans were alerted and monitored the Israeli behaviour for the remainder of the meeting.

Jamal tells the story of a conference in 2002, where Israelis tried to silence the Palestinians, calling them terrorists, and at one point Jamal was speaking and a female student jumped up, threw herself in front of the cameras, ripped off her shirt screaming, “This terrorist killed my boyfriend in a nightclub.” As the cameras zoomed in, Jamal retorted, “You are a great actress,” and that shut her up.

When the activists returned to Palestine, the wall was already partially constructed, the checkpoints were restricting movement, and it now took as long as 10 hours to travel from Ramallah to nearby Qalqilya, the first entirely encircled city. A meeting of PNGO (Palestinian Nongovernmental Organization Network) was called and 150 people came from the northern West Bank which is heavily dependent on agriculture. They were so angry that there was talk of a Third Intifada. The Palestinian Authority was already collaborating with the Israeli forces, Arafat was confined to his bombed out compound, cities were increasingly isolated. A variety of local organizations got to work. 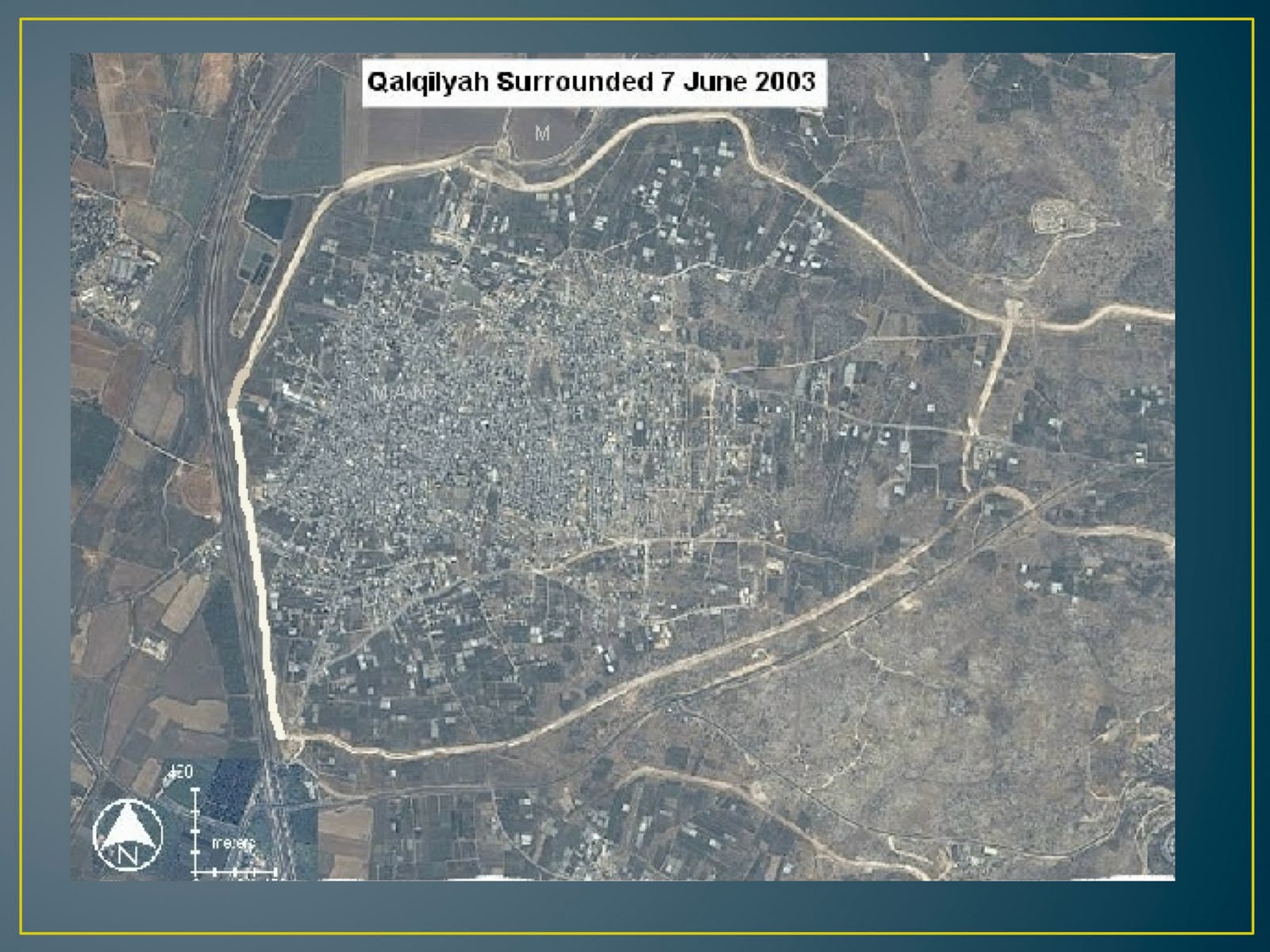 Jamal describes meetings and programs in villages with the Palestine Hydrology Group, Palestinian Agricultural Relief Committee, (PARC), Palestinian Medical Relief Society, (PMRS), building popular committees (using the experience of the First Intifada) and organizing resistance. There were marches and daily demonstrations starting at 6:00 am before the Israeli bulldozers arrived to uproot the olive groves, impeding the progress of the wall and its adjacent military roads. Activists tied themselves to trees, internationals were invited to join the struggle (International Solidarity Movement – ISM). By 2004 there were 56 popular committees (as opposed to the NGOs affiliated with PNGO) and radical Israeli organizations like Ta’ayush. That same year the International Court of Justice (IJC) declared the course of the separation wall illegal and the popular committees became more organized with districts and a board.

Jamal spoke at the UN discussing the IJC decision; the court documents were all collected and presented and the word “apartheid” was first used in that international setting. This created a big controversy since Israeli apartheid is not exactly like South Africa and the discrimination against Black people. People feared that organizations would lose funding. They suggested: Perhaps say “segregation” instead of apartheid? “Displacement” instead of ethnic cleansing? Jamal refused, this language was born from the struggles of Palestinians on the ground and softening the framing was impossible for them.

By 2004, growing from the experiences of the academic boycott, the boycott, divestment, and sanction movement (BDS) was officially created, a year later Arafat died and neoliberal policies began to dominate the discourse. Many groups from governmental agencies, PNGO, Stop the Wall, various political parties and religious groups worked together as a national committee to resist the wall until 2006 when Hamas won the legislative election and everything collapsed.

Stop the Wall restarted a national committee that has stayed true to its principles, a nonviolent, creative indigenous Palestinian struggle that also includes some of the Israeli left including Anarchists Against the Wall and Boycott from Within. The goal is to bring people together based on human rights to end the occupation, to end racial discrimination towards Palestinians with Israeli citizenship, and to support the right of return for refugees displaced in 1948 and 1967 according to international law.

I think back to my own education where Native American history, the realities of slavery, sweatshops, Japanese internment and a host of painful and critical labor movement struggles were and still are largely absent from the public curriculum. I think how much stronger our democracy is when we as a collective society face these complex and challenging issues. Imagine how this would change the Zionist narrative, if only it was present in Israeli textbooks and college curricula. I suspect it is also largely absent from the Palestinian curriculum as well. As they say, if you think education is expensive, try ignorance. 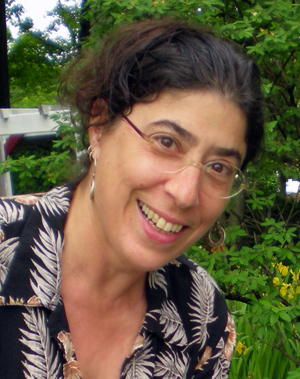 This post first appeared on Alice Rothchild’s site. Her forthcoming book is Condition Critical: Life and Death in Israel/Palestine. Rothchild launches a book tour next week with several appearances in east coast cities.

She is a Jewish-American physician. Her most recent book is On the Brink: Israel and Palestine on the Eve of the 2014 Gaza Invasion (2014 Just World Books).