Why Israel should be expelled from the community of nations One of the biggest demonstrations against Israel’s attack on Gaza was on July 12th in The Hague [above], home of the International Criminal Court and 3rd largest city in the Netherlands. There will be a national demonstration meeting outside Downing Street on Saturday July 19, 12:00pm.

All Out for Gaza: National Demo: Assemble at Downing St

The Palestinians of Gaza, naively, went to the polling station in January 2006, mistakenly believing the Bush doctrine of bringing democracy to the Middle East — in spite of him being responsible for the brutal massacre of hundreds of thousands of innocent people in Iraq and Afghanistan.

People voted, but not for the preferred choice of the Israelis, or their American backers and the Arab dictators. The Palestinian choice was against the peace process industry, against the fiction that is the ever-slippery two-state solution, against the corruption of the Oslo-era nouveau riche.

The outcome was a surprise not only for the Oslo camp, but also for the winners themselves: Hamas. And Palestinians, especially those in Gaza, were made to pay a heavy price for this transgression: the imposition of a severe siege described by Israeli historian Ilan Pappe in 2006 as “genocide.”

But the deadly siege was not enough to satisfy Israel’s hunger for Palestinian blood. The Palestinians of Gaza refused to passively accept Israel’s siege, like good natives are supposed to. Hence, Israel ferociously attacked Gaza in three horrific assaults in 2006, 2009 and 2012 and now again in 2014.

In all of these attacks, the people of Gaza were left alone to face one of the strongest armies in the world — an army that has hundreds of nuclear warheads, thousands of trigger-happy soldiers armed with Merkava tanks, F-16s, Apache helicopters, naval gunships and phosphorous bombs made in the United States. Gaza has no army, no navy and no air force. And yet Israelis claim to be under threat and fear for their lives!

Commenting on this situation in Gaza, Karen Koning AbuZayd, former commissioner-general for UNRWA, the UN agency for Palestine refugees, said in 2008:

Gaza is on the threshold of becoming the first territory to be intentionally reduced to a state of abject destitution with the knowledge, acquiescence and — some would say — encouragement of the international community.

We in Gaza know very well that Israel could not have carried out its current genocidal war, preceded by this horrific siege and a series of massacres before it, without a green light from the so-called international community.

Tellingly, an Israeli soldier was quoted by Israel’s Haaretz newspaper in 2009:

That’s what is so nice, supposedly, about Gaza: You see a person on a road, walking along a path. He doesn’t have to be with a weapon, you don’t have to identify him with anything and you can just shoot him.

But this aggression is not new; none of these wars has been a response to Qassam rockets fired from Gaza.

Above and below, inflicting damage that makes life unbearable. A Palestinian man stands amidst the debris of a house, which police said was destroyed in an Israeli air strike, in Rafah in the southern Gaza Strip July 14, 2014. Photo by Ibraheem Abu Mustafa / Reuters.

Shayma al-Masri, 4, a Palestinian girl injured in an Israeli air strike that killed her mother and two siblings, is treated in Gaza City. Photo by Mohammed Salem/Reuters 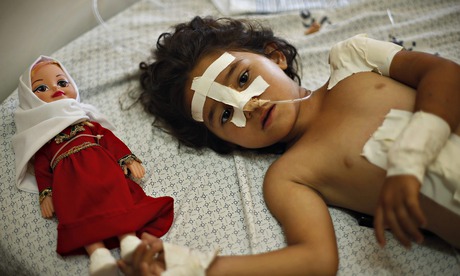 The 1948 Genocide Convention clearly states that one instance of genocide is “the deliberate infliction of conditions of life calculated to bring about the physical destruction of a people in whole or in part.”

Sara Roy, an expert on Gaza, describes the Strip as follows:

[Gaza is] a land ripped apart and scarred, the lives of its people blighted. Gaza is decaying under the weight of continued devastation, unable to function normally …
The decline and disablement of Gaza’s economy and society have been deliberate, the result of state policy — consciously planned, implemented and enforced. Although Israel bears the greatest responsibility, the United States and the European Union, among others, are also culpable … All are complicit in the ruination of this gentle place. And just as Gaza’s demise has been consciously orchestrated, so have the obstacles preventing its recovery.

The Food and Agriculture Organization and World Food Program stated in a 2009 report:

The evidence shows that the population is being sustained at the most basic or minimum humanitarian standard.

As Ilan Pappe argues in Out of the Frame, mainstream discourse in Israel is about the need to destroy Gaza once and for all: “today from the left to the right, from academia to the media, one can hear the righteous anger of a state that more than any other in the world is destroying and dispossessing an indigenous population.”

And now, judging by the increasing air raids, the incitement of Israel’s war-mongering generals and politicians, Israel is putting that ideology into practice. As Thursday evening, Gaza time, the latest statistics are horrific: 237 dead, more than 50 of them children, and 1,770 injured, according to the Gaza health ministry, and more than 1,600 homes demolished in broad daylight.

And yet those in places of power, unsurprisingly, still back Israel’s “right to defend itself,” conveniently forgetting or in the case of the Obama administration, denying that those who are oppressed and dispossessed also have the right to resist their oppression. Israel is intent on destroying Gaza and international official bodies and administrations like Obama’s repeatedly declare their commitment to Israel’s “security” like a broken record, without a care for Palestinian lives.

The urgent question facing us in Gaza is not just how to survive for today, but how to hold Israel accountable to international law and basic principles of human rights; how to stop the current escalation and the ongoing massacre and how to stop this from ever happening again.

Knowing that the credible Goldstone report on suspected war crimes in Gaza in 2008-09, and reports by Amnesty International and Human Rights Watch are all ignored or undermined, there is a bitter awareness that we in Gaza can have no expectation of Israeli accountability for the current onslaught. But this is in the short term only — in the long term, we know that Israel will have to answer to its oppression of Palestinians because this oppression will end one day. History will have it no other way.

What Palestine needs from the world today is not just a condemnation of the Gaza massacres and siege, but also a delegitimization of the ideology that produced this policy and justifies it morally and politically, just as the racist ideology of apartheid was delegitimized.

It seems, however, and again, as Ilan Pappe notices, that even horrendous crimes, such as the genocide in Gaza, are treated as “discrete events, unrelated to events in the past and dissociated from any ideology or system.” Supporters of Palestine must always relate today’s massacres to the original sin of colonization of the land which Israel has claimed for its own and the dispossession of its indigenous people.

The window of hope comes from the lessons we have learned from South Africa, where the ugly apartheid regime came under mounting pressure from outside. It is time for international civil society, as opposed to the ineffectual United Nations, to redouble their support for our struggle against apartheid in Palestine today. As Palestinians under Israeli siege, occupation and apartheid, we increasingly rely on international law and solidarity for our very survival. That solidarity is needed more than ever today.

A country that fails to abide by international law, that refuses to withdraw from Arab lands it has occupied since 1967, that practices racism against its Palestinian citizens, that refuses to allow Palestinian refugees to return to their homes and lands, is a country that should be expelled from the community of nations. International solidarity with Gaza and the Palestinians demands no less than the complete isolation of apartheid Israel.

Haidar Eid is an independent political commentator from the Gaza Strip, Palestine.