What do Palestinians hear when Jews tell a tale of loss and dispossession? 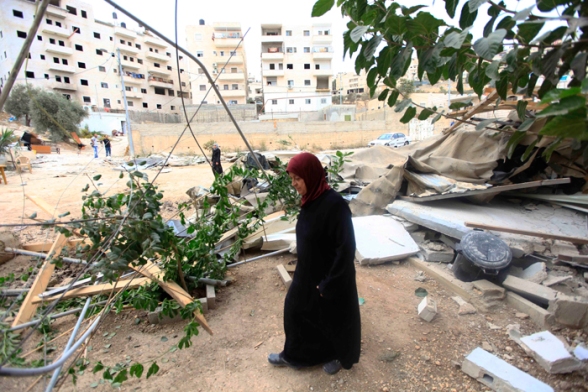 Strangers in their own land: Jerusalem Municipality demolished the home of Imad Abu Laban in Tur neighborhood in Jerusalem November 5, 2012. Photo by Afif Emera

If Israeli Jews want Palestinians to listen to our narrative, we have to make radical changes

In recent years I’ve developed a habit: anytime I am in America (invited to various lectures and conferences), I read about the indigenous peoples who have lived wherever I happen to be. When possible, I try to meet members of first nations if any have survived; if they were not expelled and pushed on westward; if they are willing to speak.

In San Diego, California, I met with the Qumeyaay, native to the area, and also with a youngster of the Oklahoma Cherokee and a woman of the Nevada Shoshone, both of whom were studying in San Diego. In Quebec I visited reservations inhabited by the Algonquin, the Mohawk and the Inuit peoples. In Brazil, lacking a common language, I only looked long and from afar at those who I knew were the descendants of the people who had lived in this huge land before it was conquered by the Portuguese. A Catholic priest of the “Liberation theology” stream, living and working in a favela for the past thirty years told me that six million “Indians” were murdered or have perished in Brazil in the course of the settlers’ take-over. And no, I have not yet been in Australia or the Congo to learn about the genocide and dispossession that the British and the Belgians committed there.

Why “spoil” travel and vacations with such information and encounters? First of all, I would rather not be a part of the culture of denial that ordinary tourism entails and will not indulge automatically in the touristic attractions of capitalism (a direct heir of colonialist victories). Second, my credentials are the knowledge that I have accumulated while documenting the Occupation of the West Bank and Gaza and Israel’s colonisation and expulsion policies. Often the basic assumption that guides the conferences I attend (or the contested basic assumption) is that the State of Israel and Zionism are a part of the global settler-colonial phenomenon. What, then, makes more sense than to study the general context of such movements?

Third, I have discovered that listening to members of first nations helps me develop a deeper understanding of the Palestinians. I have been living inside Palestinian society for the past twenty years, and as much as I might boast of knowing it, I am also aware of how my objective status as a member of the dispossessing and colonising group not only gives me privileges at the expense of the Palestinians, it also limits my ability to grasp fully and comprehend their reality and positions. In any “elite” group there are dissidents who have moral opposition to the regime of privilege of which they benefit by definition (though they use their privileges, like quite a few Israeli leftists do, to struggle against them). I think, for example, of men who oppose patriarchy and the way it holds women in a gender-inferior position, or of those who have been born to wealthy families and support social justice and economic equality. However, as people who do not experience inferiority first hand, there is always a limit to their comprehension of injustice, oppression, discrimination and the wrath that they breed.

In San Diego, a Shoshone woman (one of whose parents was even a white colonist) told me in her very American English that she could never see the US government as “her own”. A year later a Palestinian friend from Acre told me she could not take part in the social protest demonstrations because she does not feel that Israel is her state. The similarity between these two statements helped me grasp their meaning more accurately, not only rationally but also by perceiving with my senses the ongoing alienation, my friend’s feeling of being a stranger in one’s own home.

A daughter of the Qumeyaay tribe in Southern California would barely agree to meet me; and this only after she Googled my name and fortunately for me, discovered, as she said, that I live on the edge, just like her. I asked her why it was so hard to meet “them”, the indigenous people. She answered that she was tired of “whites” making a career for themselves by documenting the suffering of others. About a year ago, when I spoke with a brilliant young Palestinian scholar whose mother is European, he mentioned with resentment all those Israeli Jews who write (“and not badly, at that”) about the Palestinians and the dispossession policy. Well, I asked, should we not write then? And then thought about what the Qumeyaay woman taught me.

Without planning, I realised that such talk helps me to disconnect further my objective situation as part of the settler society from my subjectivity of being born in this country to parents who arrived as refugees and not for Zionist ideological reasons; and from the subjectivity of other Jewish Israelis. In our subjective being, chance plays an important role. For example, my mother’s family descends from the 1492 exiles of Spain; Jewish families who for centuries had lived in Spain, their homeland in every way, just like the Muslim exiles. Some of them roamed the Ottoman Empire after the expulsion by the Catholic kingdom, and settled down in the Balkans and in Asia Minor. Some arrived in the Holy Land as early as the fifteenth-century, others (Ashkenazi Jews among them) in the eighteenth and nineteenth centuries. In those very centuries Muslims came as well to this country of Palestine/the Holy Land/Eretz Yisrael, from different lands in Asia, Europe (Bosnia, for example) and Africa, and eventually became an inseparable part of the Palestinian people. Thus, exile was not a coincidence, but by mere coincidence the Levys, my mother’s family, ended up in Sarajevo and not in Hebron.

Our subjectivity does not interest those whom our objectivity has dispossessed and continues to do so. “If you are as progressive as you pretend to be, what you need to do is leave this country and go back where you came from” is something that I have heard in different variations ever since I moved to Gaza in the early 1990s. The people who say it do not really care that I and millions of other Israelis who are neither rich nor hi-tech experts nor fortunate academics have nowhere else to go. We have no “metropolis” of the kind that France was for its Pieds-Noirs, or Britain for the whites of South Africa and Rhodesia. Most of us have no native tongue other than the Hebrew we speak. Moreover, many of us are descended from families who from the 1920s until the 1950s were either directly or indirectly kicked out from their countries of origin or barely survived the murder industry of Nazi Germany, and reached Israel/Palestine because other states such as Canada and the US refused to take in too many Jews. These facts cannot be erased from our personal and collective history, we Jewish citizens of Israel, but they are exploited cynically in order to justify the state’s past and present policies against the Palestinians collectively and individually. Thus these facts are often interpreted by Palestinians as propaganda and lies, or at least disregarded as if they were not an objective factor.

In Quebec, Montreal and New York I heard members of first nations say defiantly to their white peers, whom they still define as settlers 500 years after Columbus: “If you don’t like it, get back on the boat that brought you here.” That prepared me well for the conversation that I had recently with several young Palestinians who have known me since they were children and therefore see me as a sort of “auntie”. The solution, they say, is that the Jews should leave; we joke about whether we must swim or sail away. I have no way of knowing to what extent my “nephews'” position reflects the sentiments of their peers, but there is much justified anger embodied by the image of settlers who board the same ships that 500, 300 or 60 years ago, bore them to lands where they built themselves empires at the expense of the lives and territories of the indigenous people.

In spite of the similarity, though, there are two significant differences, with a great sense of relief I should stress. Fortunately, unlike Native Americans, the Palestinian people have not been almost entirely wiped out. True, a large number of them have been expelled and not allowed back; they live in exile, in refugee camps abroad and in Palestine, and in enclaves under a hostile Israeli rule on both sides of the “Green Line”. However, as a living creative people, growing and struggling, their presence on the international political map is getting stronger every year. Zionist-Israeli efforts to silence and hide the Palestinians have failed. In contrast, even if the original and numerous peoples of America undergo an inspiring process of recovery from the trauma of genocide and imprisonment in poverty-stricken reservations; even if they do engage in a struggle with descendants of settlers who support radical social change; they have become a sparse minority, certainly in the northern part of the “Turtle Island”.

In the Middle East, we Jews are the minority. The Jewish citizens of Israel and their supporters in the West, then, are wrong to draw “inspiration” from the colossal colonial successes of European nations and the capitalist regimes they set up in their colonies and which translated dispossession and ethnic oppression into would-be legitimate class differences and class exploitation. We, Jewish citizens of Israel, do not enjoy the same advantages that the descendants of the Mayflower have accumulated.

Hence, the political, historical, social and ethical short-sightedness of Jewish Israelis is not merely revolting but also alarming. We have our “subjectivity”: we are attached to this land, we belong to a society and culture that have sprouted here, and we do carry the collective memory of being expelled from our homes in the Diaspora. Native-Palestinians will listen to our subjectivity only once we strive to radically change the obscene reality that has been created under Jewish exclusive hegemony. As a matter of fact, a radical, democratic change, which is based upon the natural belongingness of Palestinians to this land, is the only guarantee for that subjectivity to survive.