Time to call it what it is: Israeli apartheid

It’s Time to Admit It. Israeli Policy Is What It Is: Apartheid

I used to be one of those people who took issue with the label of apartheid as applied to Israel. Not anymore.

What I’m about to write will not come easily for me.

I’m not one of those people any more.  Not after the last few weeks.

Not after terrorists firebombed a West Bank Palestinian home, annihilating a family, murdering an 18-month-old boy and his father, burning his mother over 90 percent of her body – only to have Israel’s government rule the family ineligible for the financial support and compensation automatically granted Israeli victims of terrorism, settlers included.

I can’t pretend anymore. Not after Israel’s Justice Minister Ayelet Shaked, explicitly declaring stone-throwing to be terrorism, drove the passage of a bill holding stone-throwers liable to up to 20 years in prison.

The law did not specify that it targeted only Palestinian stone-throwers. It didn’t have to.

Just one week later, pro-settlement Jews hurled rocks, furniture, and bottles of urine at Israeli soldiers and police at a West Bank settlement, and in response, Benjamin Netanyahu immediately rewarded the Jewish stone-throwers with a pledge to build hundreds of new settlement homes.

This is what has become of the rule of law. Two sets of books. One for Us, and one to throw at Them. Apartheid.

A settler from the Adei Ad outpost is gently led away after a group of them hurled rocks at cars carrying a US consular visit to the area, January 2015. Photo from Diplomat Armored Rentals.

There was a time when I drew a distinction between Benjamin Netanyahu’s policies and this country I have loved so long.

No more. Every single day we wake to yet another outrage.

I used to be a person who wanted to believe that there were moral and democratic limits – or, failing that, pragmatic constraints – to how low the prime minister was willing to go, how far he was willing to bend to the proud proponents of apartheid, in order to bolster his power.

Not any more. Not after Danny Danon.

Not when the prime minister’s choice to represent all of us, all of Israel at the United Nations, is a man who proposed legislation to annex the West Bank, effectively creating Bantustans for Palestinians who would live there stateless, deprived of basic human rights.

The man who will represent all of us at the United Nations, the man who will speak to the Third World on our behalf, is the same man who called African asylum seekers in Israel “a national plague.”

The man who will represent all of us at the United Nations is the same politician who proposed legislation aimed at crippling left-leaning NGOs which come to the aid of Palestinian civilians and oppose the institution of occupation, while giving the government a green light to keep financially supporting right-wing NGOs suspected of channeling funds to support violence by pro-settlement Jews.

Apartheid means Israeli officials using the army, police, military courts, and draconian administrative detentions, not only to head off terrorism, but to curtail nearly every avenue of non-violent protest available to Palestinians.

Late last month, over the explicit protest of the head of the Israeli Medical Association and human rights groups combatting torture, Israel enacted the government’s “Law to Prevent Harm Caused by Hunger Strikes.” The law allows force-feeding of prisoners, even if the prisoner refuses, if the striker’s life is deemed in danger. 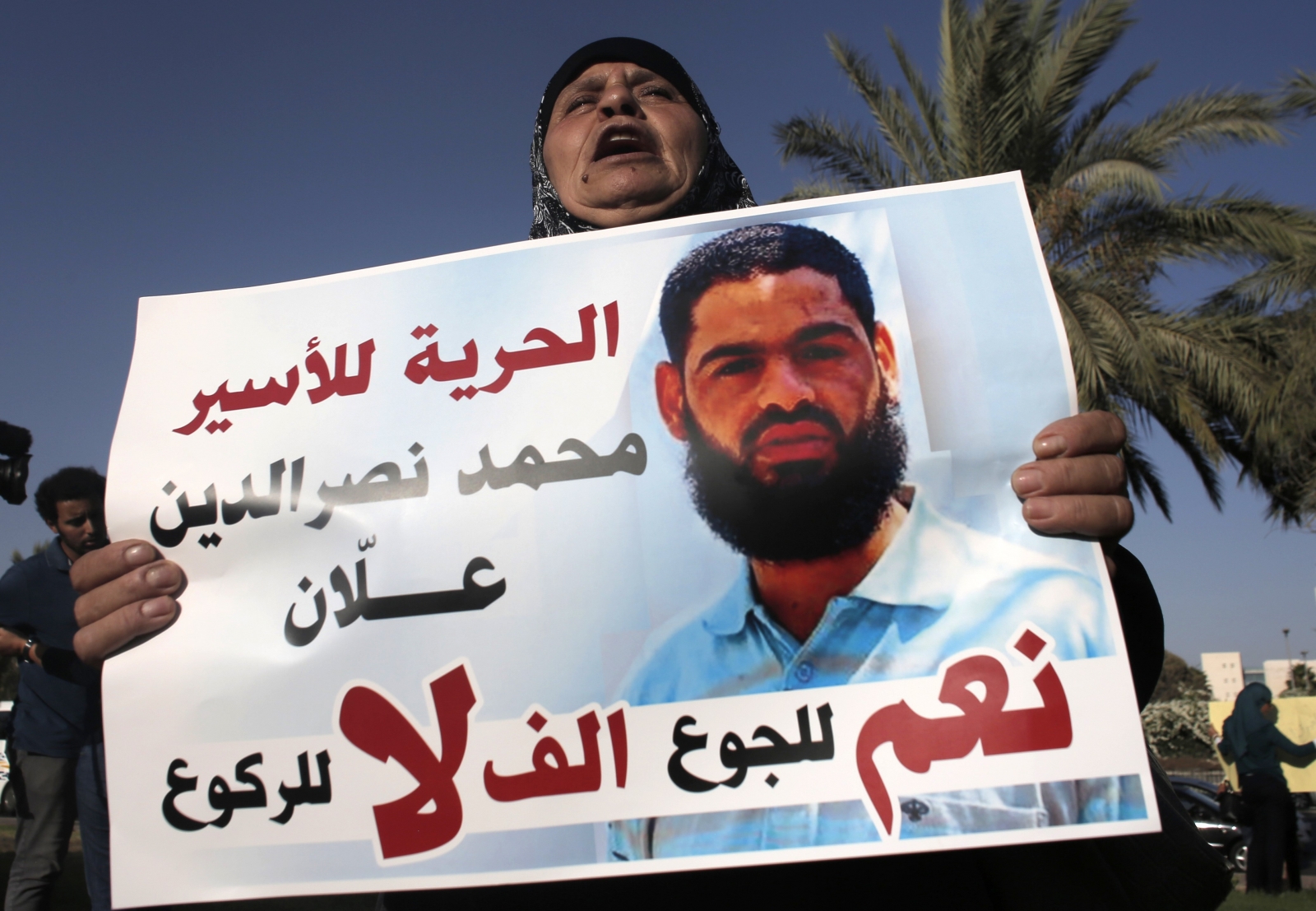 The hunger strike has been classified as terrorism so any type of force can be used to stop this threat to Israel’s security. Above, Maazouze, the mother of Mohammed Allaan, a Palestinian prisoner who is on a long-term hunger strike, holds a portrait of her son during a rally calling for his release in the southern Israeli city of Beersheva. Allaan, who is held under administrative detention, fell into a coma on August 14, 2015. Photo by Getty Images

Netanyahu’s Public Security Minister Gilad Erdan, who pushed hard for passage of the bill, has called hunger strikes by Palestinian security prisoners jailed for months without charge or trial “a  new type of suicide terrorist attack through which they will threaten the State of Israel”.

Only under a system as warped as apartheid, does a government need to label and treat non-violence as terrorism.

Years ago, in apartheid South Africa, Jews who loved their country and hated its policies, took courageous roles in defeating with non-violence a regime of racism and denial of human rights.