The joint is jumping! CodePink update on the boycott Ahava campaign

Since last we wrote on the one-year anniversary of the Stolen Beauty campaign, the proverbial joint has been jumping. The boycott is gaining steam all around with world, with new partners in South Africa and our stalwart friends in London, and our successes have Ahava so flustered that they are circulating a letter to retailers decrying the campaign. Will you keep the momentum building by taking action this season?

You’re invited to gather with friends to sing our new Ahava boycott holiday carols, parodies of old favorites such “Jingle Bells”, outside a store near you that carries Ahava! Don’t worry if you’re off-key; the important thing is to get Ahava off the shelves!  And that’s exactly what activists have been working hard to do these past few months.

In July, CODEPINK’s Jodie Evans went to the Cosmoprof Convention in

Las Vegas to confront Ahava USA’s CEO Michael Etedgi for the second time.  Also in July, Brooklyn for Peace organized the first in a series of Ahava protests at Ricky’s NY on Montague Street in Brooklyn Heights—there have been subsequent actions at the location in September and October, with the next one planned for November 30th. Bringing the campaign to Brooklyn unleashed the long-expected backlash, as seven rabbis posted an open letter against our boycott in the pages of a local paper, to which Brooklyn for Peace penned an excellent response (see below).  (Photo at right: Activists protest Ahava sales at Ricky’s in Brooklyn.)

Also in August, the so-called “Ahava Four,” activists who had chained themselves on two separate occasions inside the Ahava store in Covent Garden, were acquitted of all charges. Our allies in London were also able to prod the UK’s Camden Trading Standards Office to launch an investigation of Ahava’s fraudulent labeling practices.

In the meantime, a supporter sent us a copy of a letter that Ahava CEO Yaakov Ellis was circulating to retailers, which we took as a sign of the growing influence of our campaign. His letter was full of false claims and misinformation. We of course wrote a response that we posted to the site and a letter of our own that we have sent to retailers around the country.

In October, we presented the Stolen Beauty Ahava boycott campaign in 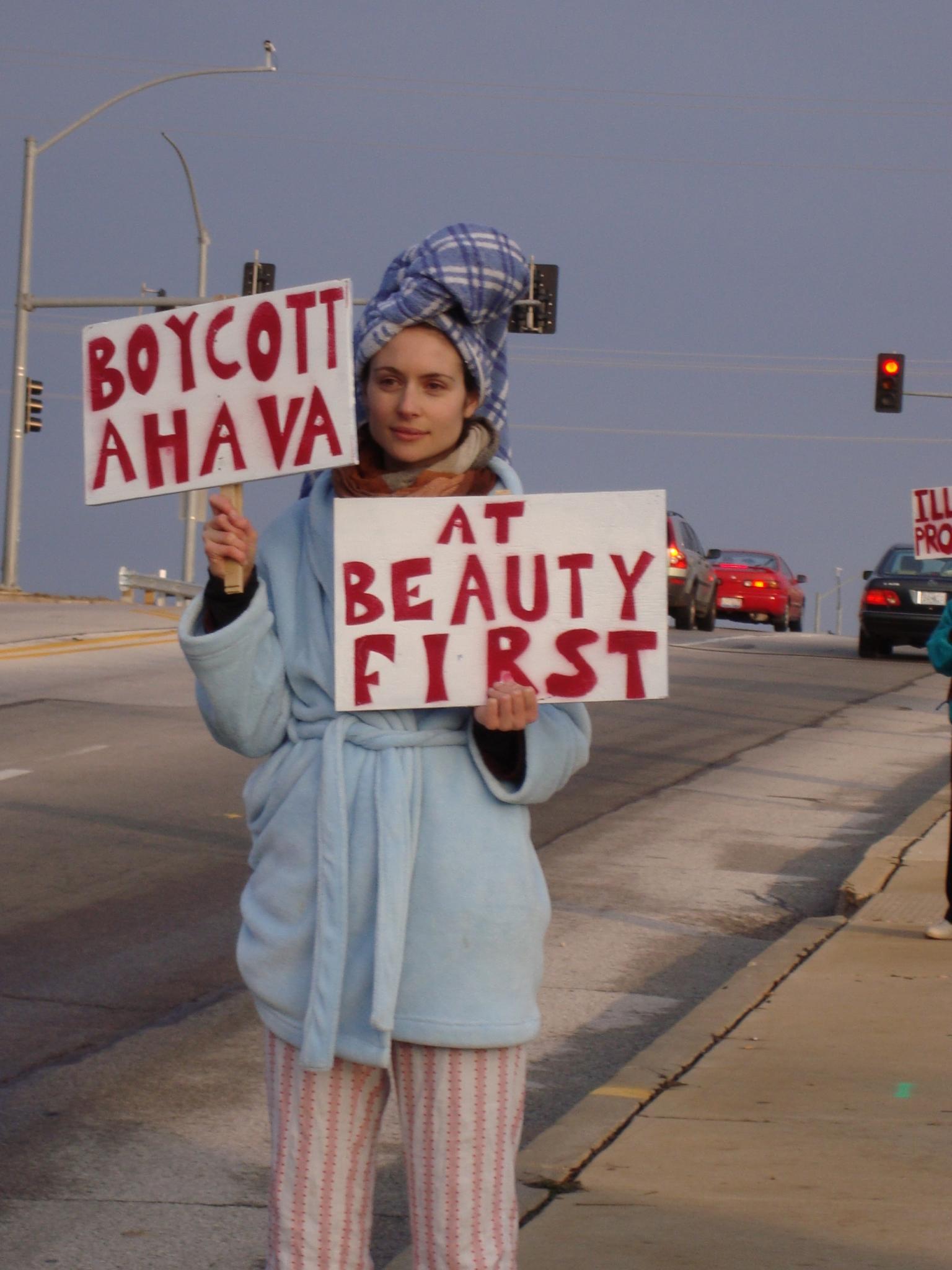 Montreal at the BDS Quebec regional conference. Our Brooklyn protest was covered in the Daily Forward, in a piece that also included details about a new U.S.-based “Israel Action Network,” funded to the tune of two million dollars a year to fight back against BDS initiatives.  Later this month, we will be going to the Russell Tribunal on Palestine London Session to testify about Ahava’s occupation profiteering and violations of international law. (Photo at right: Anna Baltzer protests Ahava at Beauty First with Holocaust survivor Hedy Epstein in St. Louis)

We want to encourage you to organize an Ahava protest in your community for the November 29th International Day of Boycott, Divestment, and Sanctions action in solidarity with the Palestinian people. You can use our Ahava holiday caroling toolkit to organize a protest, or you can simply deliver our NEW Ahava retailer letter to a store near you that carries Ahava.

While our opponents have an enormous budget, we are passionate, creative and formidable in our resolve. Thank you for working with us to bring about a just and lasting peace for the peoples in Israel and Palestine.