Settlers drive sheep and shepherds off their grazing land

Earth-moving equipment brought in to clear land at Umm al-Khair for use by Carmel’s settlers. Photo from Taayush

Watch and listen to Settlers of Carmel attacking and chasing away Palestinian shepherds and flocks 24.1.2014

Had the Jewish settlers of Carmel held their Tu Bishvat (the Jewish “New Year of the Trees day”) tree-planting ceremony on January 16, within the borders of their settlement, Carmel, it would have been taken as a fait accompli by whoever has become accustomed to the fact that Carmel inhabits the lands of others. But their “New Year of the Trees” plantings took place on a range that the sheep of the Umm al-Kheir’s Palestinian shepherds pass on their way out to graze,as they have for many years. The planting on this range was no coincidence, it was meant as a declaration – “This is ours, and so is that”.

Grazing sheep in the South Hebron hills – patches of good pasture are few and shepherds traditionally drive their sheep onto them. Photo from Firing Zone 918, April 2014 by international supporters

On Friday, Saturday and Sunday (17, 18, and 19 of January, respectively) the shepherds came through as is their custom, and the army stationed on the range did not stop them. On Monday, January 20, an incident took place when Umm al-Kheir shepherds tried to cross the range with their flock, on their way to the grazing area, as they do every day. The incident was concluded with the arrest of Maliha, owner of the flock. She was released on the same day, with an order keeping her away from the said area for 15 days. On Friday, January 24, in the early morning hours, about 35 settlers, adults and children, crowded on the range for further plantings, as if the “New Year of the Trees day” was not yet over. They planted again at spots that prevent any further possibility of passage for the Umm Al Kheir herds. It must be remembered that this is an ongoing conflict, and ever since the settlers took over the range de facto (in 2011), numerous incidents have taken place until a court appeal was made by the villagers of Umm Al Kheir. The appeal was accepted by the court of law, and the villagers possess an official document issued by the army and civil administration, confirming their right to pass their flocks over the range.

At 8 a.m., three shepherds (14, 18 and 25 years-old) came forth from Umm Al Kheir towards the grazing grounds, and intentionally directed their flock round about the range in order to bypass the planters of the settlement (in spite of the official document they possess, permitting them to cross the range). Three members of Rabbis for Human Rights joined the shepherds. 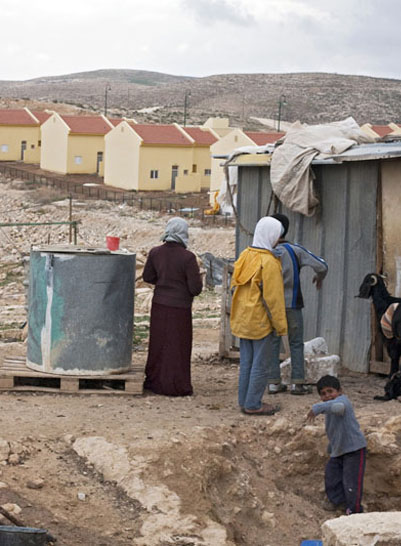 The village Um al-‘Kheir, in the Southern Hebron Hills, with the Carmel settlement in the background. Settler houses are notable for their very small windows on outward-looking walls. Photo by Keren Manor, activestills.org, 10 March 2011

The Carmel settlers stand on the range, the shepherds are down on the rim of the wadi. And then several of the settlers descend upon them: Ezer, Yaacov, Aharon, Gabi and his son, Simha and his son David (a bearded man), and Dror (who did not attack) and another whom the shepherds do not recognize by name. The settlers blocked the sheep who were on their way to detour and spare a clash. One of the assailants (unknown to the shepherds) went in among the sheep frantic with fright of the crush, and began to lash out in all directions. Yaacov and Ezer, too, were beating the flock. Bilal, the eldest of the shepherds, filmed the goings-on and kept from responding in any way. The assailants beat him too, saying: “What kind of a man are you?” One of them was armed with a rifle, ready to fire. Ezer and Yaacov were armed with pistols.

Yaacov was choking Bilal, who then shut his video camera in order to keep it whole. Yaacov let go of Bilal’s neck only upon noticing that Arik of the Rabbis for Human Rights was filming this situation.

And the flock? The assailants kept pushing it downhill, the shepherds stopping it. The sheep were maddened. And the assailants? Continued to lash out at the sheep. At this point an army jeep arrived, standing on the range. Two soldiers went down to the confrontation spot, and proceeded to demand Bilal’s ID. He was determined not to be arrested, and as he tried to negotiate with them, Arik intervened while Bilal ran off into the wadi.

Maliha then arrived, unable to bear further abuse of her sheep, and asked Ezer who ws hitting out: “Why do you do this?” He answered her with a harsh blow of his fist at her head. Of its sheer force, Maliha lost consciousness for a moment and fell to the ground. She came to immediately, but before she managed to rise to her feet, Ezer continued to beat her as she lay on the ground. At that point the two soldiers who had only been observing the blows, pulled Ezer up. Eid went down to the wadi to bring the sheep away. Ezer left. Bilal left. Only then, 40 minutes after the incident began, the police and the DCO officials arrived. The policeman asks the assailants: “Why did you not open fire?” And Rami Fares, the Hebron DCO infrastructure officer, says to the Palestinians: You have no right to go over the range”. The policeman pushes away Suleiman and Amna who had arrived on the spot along with other villagers from Umm al-Kheir.

Then Guy of Taayush arrives with the document signed by an attorney, stating black on white that the Palestinians are permitted to cross the range. Guy gives the paper to Rami Fares. The latter speaks on the phone with the attorney whose name is signed on the document on behalf of the Umm al-Kheir residents. The attorney tells Fares; “I speak to you lawfully, not with force”. Needless to say, the Carmel settlers did not acknowledge the document which Guy brought to the spot.

An Israeli soldier stands by as a Caterpillar bulldozer clears the ground next to the settlement Carmel, south of the West Bank city of Hebron. Photo by Mamoun Wazwaz, Maan Images

When the army forces arrived, the Carmel settlers concluded their tree planting and left. So did everyone involved in the assault.

The sheep were finally led to their grazing area via the long trail, which the shepherds had originally meant to take anyway, to avoid clashes. Arik joined them. On the way back from their grazing, again Simha, the security official of Carmel settlement and his friends came out towards the shepherds and their flock but without further provocations.

Maliha was taken home, a Red Crescent ambulance arrived, the paramedics examined her and, as she requested, did not take her to the hospital.

And I write this testimony, this time as a detailed report, as I sit with Maliha, her head dizzy, her leg wounded, and her heart shrieking with its great pain. I sit and listen, silently. I know, as she does, that the physical pain will subside. And like her, I try to contain the unbearable – the injustice, the hatred, the blindness… I run out of words…

See also Trapped in a mesh of regulations: life in Firing Zone 918
Battling Racism in the South Hebron Hills, by David Shulman from Umm al-Kheir.