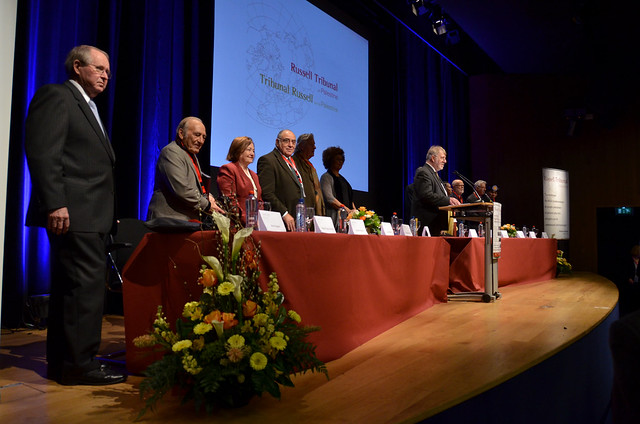 The jury of the Russell Tribunal on Palestine (RToP) after its final session. All photos by Renaud Hoyois

The Russell Tribunal on Palestine has urged the European Union to suspend the EU-Israel association agreement and has called on member States for a ban to the importation of products coming from Israeli settlements. These were among the recommendations issued by the Brussels-based ‘public inquiry’, which has carried out a four-year investigation into the complicity of States, international organisations, institutions and private corporations in Israel’s violations of human rights and international law.

In its closing session on Sunday, the Tribunal also announced its support for initiatives from international civil society aiming at making it possible for Palestine to become a full member of the International Criminal Court and to ask the ICC to investigate Israel’s well-documented war crimes and crimes against humanity.

● A call for the UN to reconvene the Special committee against Apartheid.

● A call for the International Criminal Court prosecutors to accept Palestinian jurisdiction.

Katarzyna Lemanska, coordinator of the European Coordination of Committees for Palestine says: “Just few days before the Russell Tribunal’s concluding session, all EU member States diplomatic delegations in Palestine advocated EU sanctions on Israeli settlements. Last week the European Parliament has passed a resolution where it asked to free all members of the Palestinian Legislative Committee detained in Israeli prisons. If the EU is serious about forcing Israel to respect the rule of law and the basic human rights of the Palestinian people, it should comply with the Russell Tribunal’s recommendations”. 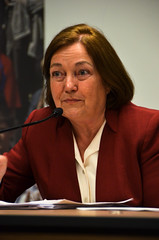 And on the eve of US president Barack Obama’s visit to Israel, Maguire added:

Obama could be a friend to the Israelis if he went to Israel and called for an immediate end to the occupation and for Palestinians’ human rights and international law to be respected by Israel’s government. Now, will he do that? Well, let’s give him a chance! 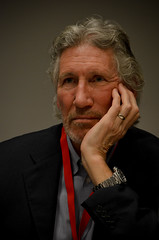 Pink Floyd’s Roger Waters [above], who’s also been sitting on the Tribunal’s jury, said he would write an open letter to his fellow musicians and rock stars the World over, asking them to take a stand on the Palestinian issue and to support cultural boycott initiatives towards Israel.

“What is right is right, and what is wrong is wrong: if you want to call yourself a human being, there comes a time when you have to stand up and speak out your truth”, Mr Waters Said.

“If you think that what the Russell Tribunal on Palestine is saying is wrong, you should go there: you should go to Gaza, you should go to the refugee camps, and only then you can form your own opinion. I encourage any Israeli legal expert to come before the Tribunal and challenge its conclusions. We’ve won the argument, now it’s time for civil society to take action”.

Civil rights activist and former Black Panther prisoner Angela Davis said: “We are guaranteeing that the tribunal won’t stop now. This is simply a new beginning. The Russell Tribunal is not over with the Brussels session. As we drew inspiration from Russell, we now have to follow on the footsteps of the late Stéphane Hessel, who took the Palestinian cause to his heart”.

The Tribunal concludes that it will support all initiatives from civil society and international organisations aimed at bringing Israel in front of the International Criminal Court. It calls for the ICC to recognise Palestinian jurisdiction and for the organisation of a special session of the United Nations General Assembly on Israeli Apartheid.

Other key Recommendations issued by the Tribunal include:

A reconstitution of the United Nations Special Committee on Apartheid
Further criminal investigations of corporations aiding and abetting Israeli violations such as the police raid on the Dutch construction equipment company Riwal.
The establishment of an international committee of former Political Prisoners to campaign on Prisoner issues
To support civil society in using the tribunal’s findings to undertake direct actions aimed at confronting state, institutional and corporate complicity with Israel’s crimes.

Jury member Pink Floyd’s Roger Waters said: “The Russell Tribunal is a glimmering light at the end of the tunnel. If you think that what it says is wrong, go to Palestine, go to the refugee camps and judge for yourself. Until then, you’re only speaking of your own prejudices. I feel I can speak because I have witnessed the horror of Israeli Apartheid, I am speaking from personal experience”.

He added: “Many artists that I am in contact with want to speak out and would like to honour the Palestinian call for a cultural Boycott of Israel but are terrified of doing so. They must be braver. We have won the argument and now we, civil society, have to force States, institutions and international organisations to take action”.

Waters has written an open letter to international musicians and Shuki Weiss – Israel’s premier music promoter. The letter encourages musicians to respect the Palestinian and Israeli calls for Boycott, Divestment and Sanctions against Israel (2)

Civil rights activist Angela Davis, also a member of the jury, said: “As we originally drew inspiration from English philosopher Bertrand Russell, we now follow in the footsteps of the late Stéphane Hessel, who combined resistance with integrity, solidarity and advocacy. We have all become advocates for Palestinian and universal human rights from the grassroots to the highest levels”.

This closing session does not represent the end of our activities, but a new beginning. In the future, the people’s court will work to check that its recommendations and conclusions are integrated into advocacy, activism and legal claims.

Fadwa Barghouti echoed the words of her husband Parliamentarian Marwan Barghouti, writing from prison where he is serving five life sentences for resisting Occupation: “I salute the fighter, the diplomat, the writer, who is supporting our struggle. And those rising up in the Arab world against tyranny – their dream has filled us with hope. The Russell Tribunal is a key tool in supporting is in reaching our goal of Justice and Peace based on International Law”.

The ‘Peoples’ Tribunal’, in its four years of activities, examined third party complicity in violations of Palestinian human rights under international law. Under scrutiny were the United Nations and American veto power, corporate complicity, European Union collusion, and the Crime of Apartheid, with sessions taking place in New York City, London, Barcelona and Cape Town.

A comprehensive body of evidence spanning four years of enquiry included testimony from the World over, from barristers, ambassadors, and civil servants to Human Rights workers, farmers, factory labourers and poets. (3)

British Queen’s Counsel, Professor and Barrister Michael Mansfield was among the wide array of legal experts for the Tribunal. He said: “The tribunal as an initiative may be at an end but our international legal and civil society co-operation will continue. Tribunal Patron Stephane Hessel would want us to continue until Self-Determination is achieved for the Palestinian People – we will follow his example and his legacy shall live on in our ongoing work for justice for the Palestinians”.

The Russell Tribunal on Palestine (RToP) demanded on Sunday that the ICC investigate crimes against humanity being committed by Israel in the Palestinian occupied territories.

The Russell Tribunal on Palestine, which was created in 2009 to look into the various accountabilities that have led to the continued occupation of the Palestinian Territories and the non-application of UN resolutions, held its fourth hearing in Brussels.

The Tribunal recommended that the UN General Assembly reconstitute the UN Special Committee against Apartheid and convene a special session to consider the question of apartheid against the Palestinian people.

It also called on the UN to examine the nature, consequences and legal status of Israel’s prolonged occupation and apartheid.

The tribunal heard more than 150 eyewitness and expert accounts, including that of Haneen Zoabi who is a member of Israeli Knesset.

The jurors at the tribunal said that they supported calls by Palestinian civil society for Palestine to take immediate steps to ratify the Rome Statute of the ICC. On its part, the ICC demanded that immediate investigations into the crimes against humanity and war crimes committed commence.

Israel practices numerous crimes against humanity that were referred to by the Tribunal and have been documented by Palestinian and international NGOs and legal experts over many years. This dates back to the Rome Statute which came into force on July 1, 2002.

The jurors at the Tribunal also called for the UN to withdraw from the “so-called Quartet, which needs to be disbanded forthwith given that it has operated as a block to the implementation of international law.”

The Quartet was accused by the Tribunal of giving “the false impression of presiding over a meaningful peace process.”

Regarding EU member states, the Tribunal called on EU bodies to implement the European Parliament’s resolution calling for the suspension of the EU-Israel Association Agreement. Thus, the importation of all settlement products would be banned.

EU states were also asked to repeal any restriction under domestic law that would impede compliance with the duty to prosecute or extradite any alleged perpetrator a war crimes or crimes against humanity.

They were also asked to refrain from limiting the scope of universal jurisdiction so as to ensure that no EU member state becomes a safe haven for suspected perpetrators of war crimes or crimes against humanity.

With regard to the US, the Tribunal said it must cease its unequivocal economic, military and diplomatic support for Israel which makes the US directly complicit in a very wide range of Israeli violations of international law.

In particular, it called on the US to cease, its “destructive” veto policy at the UN Security Council, most notably on the issue of Israel’s colonial settlements, which the US itself acknowledges as unlawful.

The Tribunal joined the calls of the BDS movement and others for the targeted boycott of corporations supporting Israel. The corporations mentioned are Veolia, G4S, Ikea and Caterpillar as well as Israeli firms that assist and profit from the occupation of Palestinian territory, such as Ahava.

Through these findings, the Tribunal aims to contribute to the mobilisation and the involvement of civil society within all states concerned with the question of Palestine.

The Tribunal said that its legitimacy does not stem from a government or any political party, but from the prestige, professional interests and commitment to fundamental rights of the members that constitute the Tribunal.

The Russell Tribunal on Palestine (RToP) is a people’s tribunal established in 2009 to examine the role and complicity of third parties (governments, institutions and corporations) in violations of international law committed by Israel against the Palestinian people.

Aminata Traoré, author and former Minister of Culture of Mali