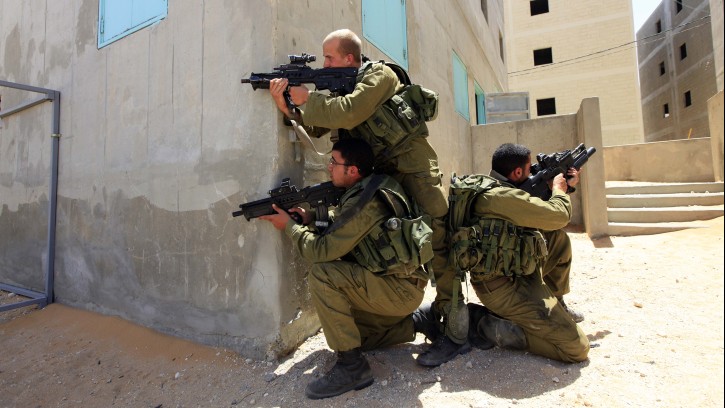 IDF soldiers training for what has become their primary role: controlling  Palestinians through fear and violence. Photo by Tsafrir Abayov/Flash90)

You Can’t Rebrand the Occupation

No sum of money can rebrand Israel’s occupation.

The Jewish Agency has teamed up with Israeli Prime Minister Benjamin Netanyahu and American Jewish philanthropists to launch the most exorbitant “pro-Israel” campaign ever — expected to reach an annual budget of $300 million by 2015.

The stated aim of the lavish endeavor — which will only be formally announced at a conference in Jerusalem in October — is to strengthen the connection between Israel and Diaspora Jewish communities. The project will reportedly focus on Israel education, Israel’s image on campus, free trips to Israel and giving incentives to immigrate to Israel — all programs that the Jewish Agency, American Jewish organizations and the State of Israel are already deeply invested in.

So, why the sudden need to pour millions of more dollars into a set of programming that doesn’t appear to offer anything new? “Imagine the effect on the peace process in Northern Ireland if the British government continued moving thousands of Protestants from Scotland into Ulster and settling them, at government expense, on land confiscated from Irish Catholics. […]

“With few exceptions, the settlements have not made Israel more “secure” as was sometimes claimed; they have made Israel less secure. They have greatly extended the country’s lines of defense. They impose a crushing burden of protecting widely dispersed settlements deep inside densely populated Palestinian territories, where ever larger numbers of Palestinians are increasingly infuriated by the inevitable controls, curfews, and violence, as well as by humiliation imposed on them by insensitive or undisciplined recruits and army reservists. ”  From
Israelis & Palestinians: What Went Wrong? Amos Elon, NY Review of Books, December 2009.  Photo shows apartment blocks under construction August 12, 2013 in Pisgat Zeev, an urban settlement in an area Israel annexed to Jerusalem in 1967 . Photo by Amir Cohen / Reuters.

It may have something to do with the fact that Israel is a hard commodity to sell these days. The 46-year occupation is going strong, settlement construction continues unabated, settler violence is on the rise and an increasing number of Israeli members of Knesset are openly coming out against the establishment of a Palestinian state and a two-state solution. For “pro-Israel” professionals who make their living building up Israel’s brand identity as best they can, just like any product on the market, this is, as Daniella Peled put it in a recent op-ed for Haaretz, a “marketing nightmare.” Despite Israel’s gay-friendly beaches, successful start-ups and Nobel Prize winners, its most popular brand by far (and unfortunately) is its occupation. And there’s some buyers’ remorse.

An IDF infantry soldier armed with an Israeli-made Tavor rifle takes part in an urban warfare drill. The gun is an Israeli-made compact rifle designed for marksmen to use in urban situations. Photo Tsafrir Abayov/Flash90)

The European Union is set to implement guidelines in 2014 that restrict cooperation with Israeli entities operating in the West Bank, something the Israeli government and the U.S. have been desperately trying to stave off; renowned physicist Stephen Hawking decided to turn down an invitation last May to Israel’s Presidential Conference out of solidarity with the Palestinian call for boycott; popular cultural figures like musician Roger Waters and author Alice Walker have endorsed the Boycott Divestment and Sanctions movement, and continue to make headlines every time they urge another artist to follow suit.

An Israeli soldier aims his weapon at a Palestinian after clashes broke out during a Palestinian demonstration against the expansion of the nearby Jewish settlement of Itamar taking land from the Palestinian village of Yanoun. December 1999. Photo by Reuters.

All this has the prime minister concerned. Senior Israeli businessmen have warned Netanyahu that the stalled peace process threatens Israel’s economy; in June, he called on several American Jewish millionaires to help him combat efforts around the world to “delegitimize” Israel (often his codeword for boycott) and endorsed recommendations by the Jewish People Policy Institute – a think tank founded in 2002 by the Jewish Agency – to counter what is described in their annual report as “anti-Israel sentiment on the settlement issue” (making it clear their definition of pro-Israel is pro-settlement); and at around the same time, the Conference of Presidents of Major American Jewish Organizations announced it was launching a major social media campaign to fight BDS.

In this context, it is difficult to see the new multi-million dollar “Prime Minister’s Initiative” as anything but a desperate and misguided campaign to try and rebrand Israel – but without dealing with its most defective product. A campaign that could bolster Israel’s image much more effectively and probably be cheaper for both Israelis and Americans is one that neither the Jewish Agency nor the prime minister have put on the table: Ending the longest-running military occupation in history.

Live footage of Israeli soldier pointing loaded gun at unarmed Palestinian. From Youtube, 2011
Mairav Zonszein is a writer and editor based in Israel. She blogs at +972mag.com.

The Jewish People Policy Institute (JPPI) is an independent professional policy planning think tank incorporated as a private non-profit company in Israel. The mission of the Institute is to ensure the thriving of the Jewish People and the Jewish civilization by engaging in professional strategic thinking and planning on issues of primary concern to world Jewry. Located in Jerusalem, the concept of JPPI regarding the Jewish People is global, and includes aspects of major Jewish communities with Israel as one of them, at the core.

JPPI’s activities are action-oriented, placing special emphasis on identifying critical options and analyzing their potential impact on the future. To this end, the Institute works towards developing professional strategic and long-term policy perspectives exploring key factors that may endanger or enhance the future of the Jewish People. JPPI provides professionals, decision makers and global leaders with:

…
JPPI is unique in dealing with the future of the Jewish People as a whole within a methodological framework of study and policy development. Its independence is assured by its company articles, with a board of directors chaired by Ambassador Stuart Eizenstat, and composed of persons with significant policy experience. The board of directors also serves as the Institute’s professional guiding council.

The Team Behind JPPI – Ambassador Dennis Ross
Ambassador Dennis Ross is co-chairman of JPPI’s board and professional guiding council. He rejoined JPPI after serving as a special assistant to President Obama and NSC Senior Director for the Central Region. For more than 12 years (88-2000), Ambassador Ross played a leading role in shaping US involvement in the Middle East and was the point man on the peace process in both the Gorge W. Bush and Bill Clinton Administrations. From 2002-2008, he was part of the founding group of JPPI and served as its first chairman. Currently he serves as a counselor at the Washington Institute for Near East Policy. He is the author of several influential books on the Middle East and US foreign policy: The Missing Peace: The Inside Story of the Fight for Middle East Peace (2004); Statecraft, and How to Restore America’s Standing in the World (2007) and most recently Myth, Illusions, and Peace: Finding a New Direction for America in the Middle East co-authored with David Makovsky.

On Dennis Ross’s role in shaping Obama’s view of what is to be done in Palestine/Israel: The American mis-leader of those who want justice for Palestinians

See also Israel cranks up its propaganda machine for British students
How can you market a country like Israel?
Jewish establishment to go all out against BDS