Pleading 'rights' of Palestinian workers in settlements is hypocrisy

Palestinian workers on a settlement in the Jordan valley. From Working for Survival: Labour conditions of Palestinians working in settlements by the Norwegian Committee for Palestine.

Boycotts that aid the Palestinians

As governments and civil society groups around the world increase their efforts to target goods produced in Israel’s illegal settlements, the Israeli government and BDS critics are stepping up the propaganda counter offensive.

One of the main tactics adopted by those seeking to stem the boycott tide is to state that these measures actually harm Palestinians. Israel’s Ministry of Foreign Affairs (MFA) has been pushing back against a boycott along such lines for some time, but given recent developments in South Africa and the European Union, there has been a renewed emphasis on the supposed counterproductive effect of such tactics.

There have been joint Israeli government-settler propaganda initiatives, and even an official, MFA-circulated document on “the effects of labelling settlement products on the Palestinian economy”. “Should Europeans be successful in banning Israeli products from the West Bank”, Israel’s ambassador to the UN said in June, “this will bring about the loss of jobs of several thousands of Palestinians”. [Boycotting Israel, Israeli Ministry of Foreign Affairs]

Interestingly, there are parallels here with arguments used against the international boycott campaign during the time of Apartheid South Africa, with ANC activists having to confront claims “that Non-White people will be the first to be hit by external boycotts”. Those comparisons aside, the argument is flawed for four reasons.

First, despite the anti-BDS lobbyists’ apparent concern for the welfare of the Palestinian worker, the latter’s main enemy is in fact, the Israeli occupation. Israel’s colonial regime – at the heart of which are the settlements – is characterised by movement restrictions and discriminatory land access, and is consistently highlighted by the World Bank and IMF as the main brake on economic growth. [Palestinian Economy is Losing Long-Term Competitiveness World Bank, March 2013;  “persistent Israeli controls and obstacles on internal movement, exports, and imports in the West Bank, as well as the virtual closure of Gaza, thwart the private sector. ” IMF report on visit to oPt, July 2013]

Remember the big picture. The settlements have been repeatedly condemned as illegal under international law. UN Security Council Resolution 452 describes Israel’s settlement policy as of “no legal validity” and constituting “a violation of the Fourth Geneva Convention” – a view echoed by the Convention’s own High Contracting Parties. The UN General Assembly and the International Court of Justice both take similar views.

Furthermore of course, the settlements’ impact on the Palestinian population is significant and disastrous, with consequences like “Palestinian farmers losing land and income”, according to the Red Cross. The settlements and their associated regime “limit [Palestinians’] ability to move freely”, says the UN, and constitute “a serious violation of the prohibition on discrimination” (Amnesty International).

Second, Palestinians working in settlements – contrary to the impression given by pro-Israel propaganda – must endure substandard and demeaning conditions. In 2012, Israel’s State Comptroller reported on industrial zones inWest Bank settlements, and noted, among other things, “serious environmental hazards”, and neglects “in the field of safety and hygiene” that point to “disregard for human life” and “places in real danger the well-being, health and lives of the workers”.

In addition, 93 percent of Palestinian workers in settlements “have no union or committee to represent them” and most “earn less than the Israeli minimum wage”. Work permits require “the approval of the Israeli internal security service”, and an estimated 1 in 10 Palestinian workers in settlements actually “work on confiscated lands originally owned by their families or one of their relatives”.

Third, citing Palestinians working in settlements as a reason not to target Israeli apartheid for boycott is particularly cynical, given that the occupied population has limited options for employment in an economy and society under critical strain due to Israeli colonisation. It is not surprising that one study found 82 per cent of Palestinian workers “have the desire and willingness to leave their jobs in the settlements, provided that a suitable alternative is available” – alternatives that are not available because of Israel’s occupation. [Palestinian Workers in Settlements
Who Profits’ Position Paper.] 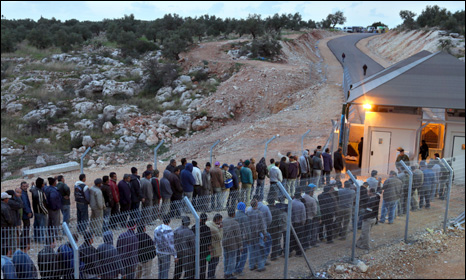 Palestinian workers  wait at a checkpoint at the end of a long day in a settlement to get to their homes in the West Bank. ‘We wouldn’t have to do this if the PA invested in us’ said one, angrily. Settlement ban fear of Palestinian labourers, BBC, April 2010

In fact, aside from the parallel with the South African Apartheid era, those attacking the boycott in the name of “Palestinian workers” also echo those companies that defend sweatshop labour on the grounds of “Well at least they have a job!“ – a justification rightly rejected by campaigners and rights groups.

Ben White is a freelance journalist, writer and activist, specialising in Palestine/Israel.