Abbas: Palestine no longer bound by agreements with Israel

BETHLEHEM  — President Mahmoud Abbas told the UN General Assembly on Wednesday that the Palestinian Authority will not remain committed to agreements with Israel, referring to the Oslo Accords of 1993, while violations take place on a daily basis.

Abbas told the General Assembly that Israel’s refusal to commit to past agreements and release Palestinian prisoners, and continued Jewish settlement activity in the occupied West Bank and East Jerusalem, were destroying the possibility of a Palestinian state.”

We therefore declare that we cannot continue to be bound by these agreements and that Israel must assume all of its responsibilities as an occupying power, because the status quo cannot continue and the decisions of the Palestinian Central Council last March are specific and binding.

People in Ramallah listen to their President’s speech to the UN General Assembly on Sept. 30th, 2015. Photo by Nasser Nasser / AP

Abbas said that the Palestinian leadership will implement the declaration by all “peaceful and legal means.”

Either the Palestinian National Authority will be the conduit of the Palestinian people from occupation to independence, or Israel, the occupying power, must bear all of its responsibilities

Abbas continued Palestinian patience “has come to an end” and described the current situation as “unsustainable.” The president said it was “unconscionable” that the question of Palestinian self-determination has still not been resolved, asking:

Is it not time for the longest occupation in history, suffocating our people, to come to an end?

“Palestine, which is an observer state in the United Nations, deserves full recognition and full membership,” he said.Abbas appealed to “those countries that have not yet recognized the state of Palestine yet, to do so.”

Clashes in recent weeks between Israeli police and Palestinians at the sensitive Al-Aqsa Mosque compound in Jerusalem have raised tensions and prompted Abbas to warn of the risk of a third intifada, or uprising.”I call on the Israeli government to cease its use of brutal force… particularly its actions at the Al-Aqsa Mosque,” Abbas told the Assembly.”Such actions will convert the conflict from a political one to a religious one, thus creating a explosive situation in Jerusalem and the remaining Palestinian occupied territory.”Abbas delivered his address ahead of a ceremony to raise the Palestinian flag at the world body for the first time, alongside those of the UN’s 193 member states.The General Assembly voted September 10 to allow the flags of Palestine and the Vatican — both have observer status — to be raised at the United Nations.The resolution was backed by 119 countries, with 45 abstentions and eight votes against, including Australia, Israel and the United States.

AFP contributed to this report. 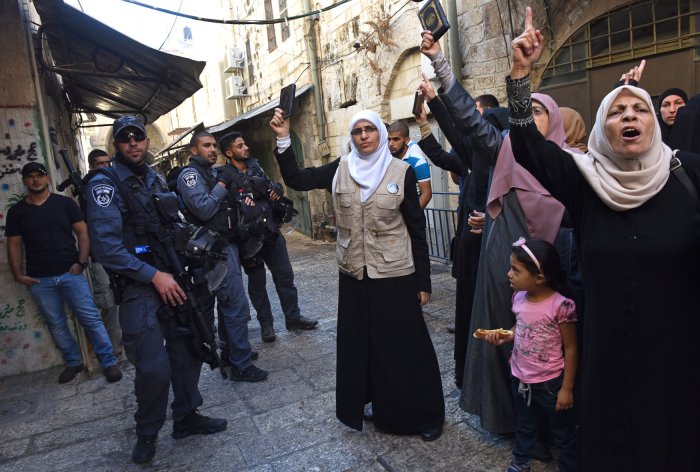 Israeli border police keep watch over Muslim women from the Mourabitat group as they hold the Koran at a protest against Jewish groups visiting the Al-Aqsa Mosque compound and for being banned from their holy site in the Old City of Jerusalem, September 22, 2015. Photo by Debbie Hill/ UPI

GAZA CITY — The Hamas movement has urged President Mahmoud Abbas to use his speech at the UN General Assembly on Wednesday to call off all past agreements signed with Israel.

Hamas spokesperson Sami Abu Zuhri called on Abbas to adopt a national strategy that would allow the Palestinian leadership to effectively face Israeli violations, including the protection of the Al-Aqsa Mosque compound in occupied East Jerusalem.

Abu Zuhri said: “This is a deciding moment. It’s not enough to deal with challenges through passionate speeches and nominal actions that have no actual value or effect on the ground.”

The call came hours before Abbas was set to deliver his speech at 12 p.m. local time (1600 GMT) at the UN headquarters in New York.

The speech is expected to be closely watched for clues of his intentions at a time of growing despair among Palestinians.

In the run-up to the speech, there were reports that Abbas would use the opportunity to drop a “bombshell.”

Suggestions of what that could mean have included a complete withdrawal from the Oslo Accords of the 1990s or the dissolution of the Palestinian Authority that those agreements created.

While such an announcement could potentially have a major impact, many analysts question whether Abbas would truly press ahead with it.

Palestinian and Israeli leadership have negotiated several peace agreements over the past three decades, none of which have stopped the growth of Israeli settlements across occupied Palestinian territory or effects of military occupation.

Hamas and other Palestinian factions have called on Abbas to cease the Oslo Accords in the past.

The ongoing occupation of Palestinian territory has so far taken a backseat in UN General Assembly over the past days, with precedence given to the conflict in Syria.

AFP contributed to this report.