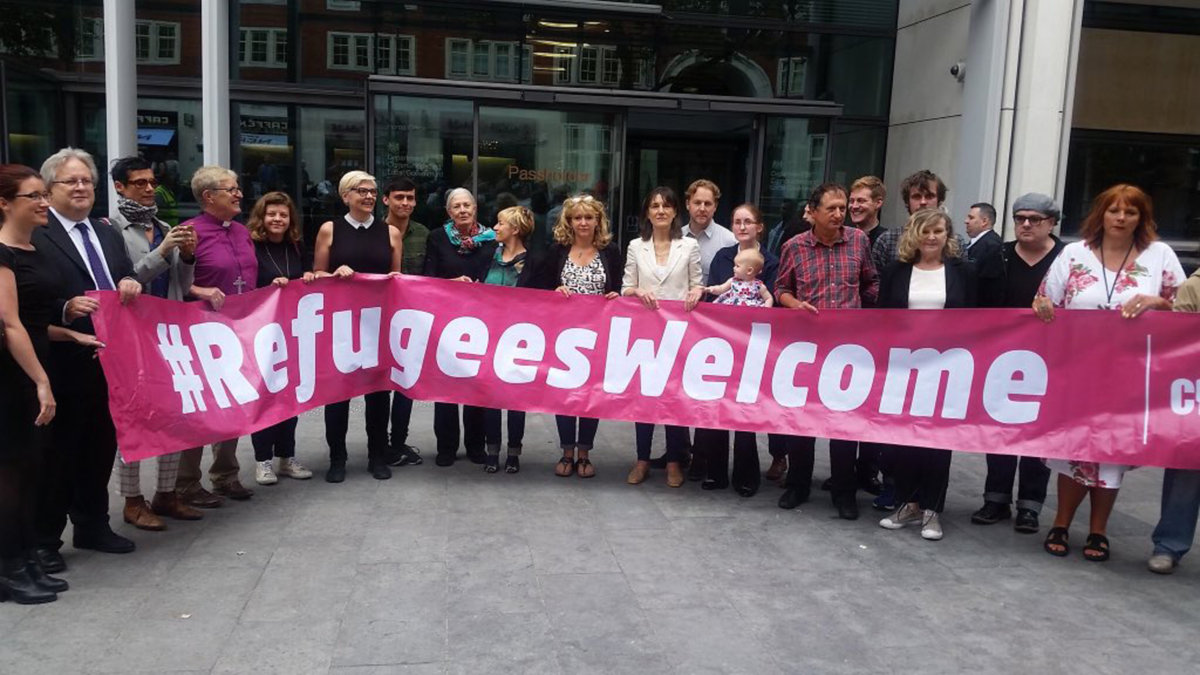 A group of Liberal Rabbis and Citizens UK display their welcome for refugees in Birmingham. Photo from Liberal Judaism website.

“As Jews, we welcome refugees” (unless they’re Palestinian).

Apart from the Israeli government, Donald Trump, and various Zionist lobby groups around the world, like the Board of Deputies of British Jews, everyone else knows that the West Bank Settlements are obstacles to peace.

But there’s something else that’s just as big an obstacle to peace as the Settlements. But nobody wants to call it out. Nobody wants to draw attention to the double standards, the tragic irony, the gaping hypocrisy.

It’s the obstacle to peace and reconciliation that gnaws away at our tradition of Jewish ethics undermining the future of Judaism itself.

Jews in Britain have an admirable track record on our attitude towards refugees and immigration generally. That’s why the vast majority of us weren’t swayed by the anti-foreigner rhetoric that made the pro-Brexit referendum campaign so toxic.

Just like the much larger Jewish community in the United States, Jews in Britain are (mostly) liberal in politics and social outlook. We want to live in a country that’s welcoming, tolerant, accepting and inclusive. Of course we do. That’s the kind of society where Jews always thrive. That’s the lesson of the Holocaust that we should never forget. Because we are Jews we don’t go around shouting ‘Britain First’ or call for the wagons to be circled or the drawbridge hauled up because talk like that leads swiftly to antisemitism.

In 2015 when the scale of the worst refugee crisis in Europe since the Second World War began to be understood, the Jewish community was quick to speak out and to take action. 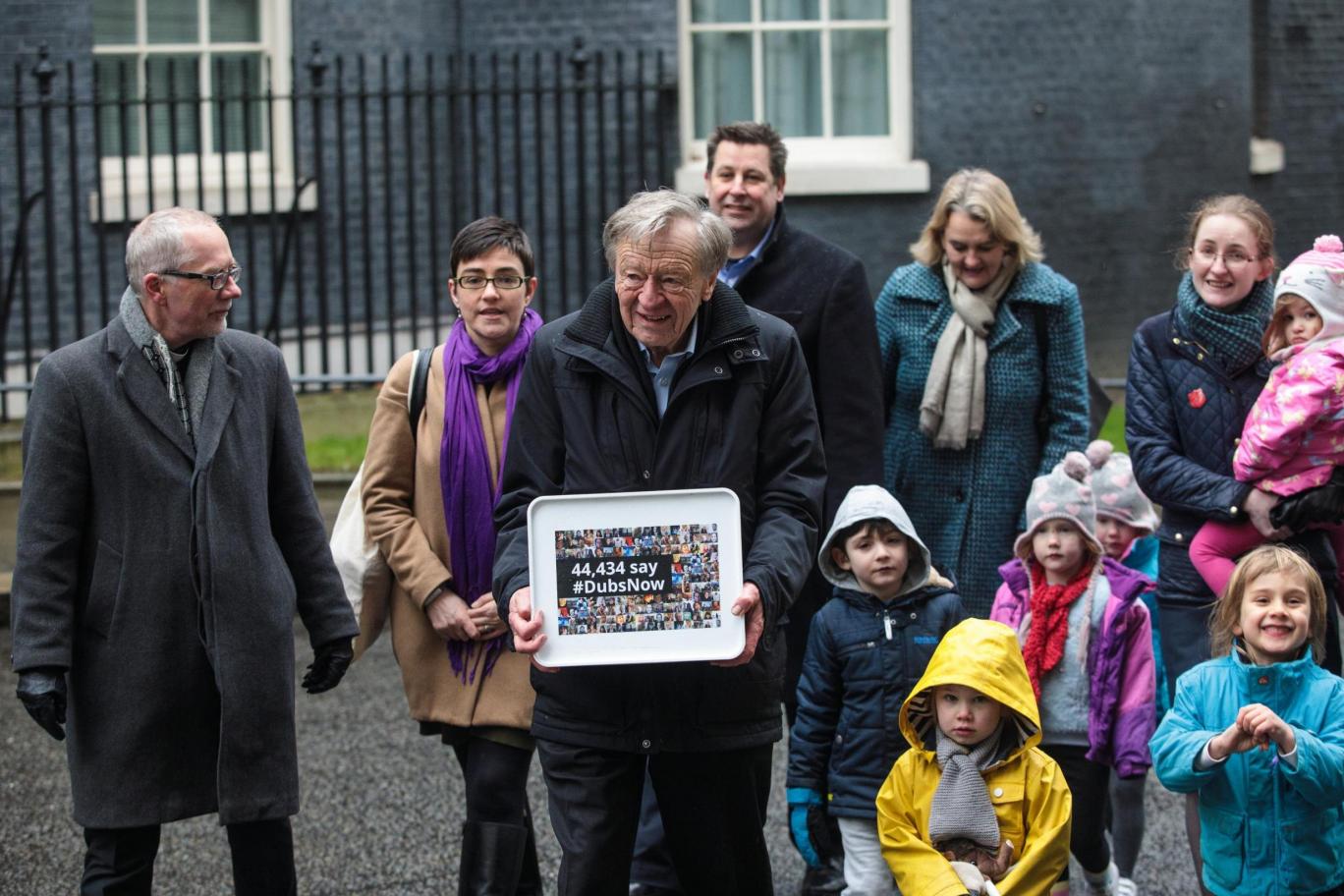 An emergency appeal by the small British Jewish charity World Jewish Relief to provide food, shelter and emergency materials to refugees in Turkey and Greece, raised £85,000 within hours of being launched.

Jewish representatives from shuls went down to Harmondsworth Detention Centre to see what help they could offer. Masorti Young Adults began collecting clothes and supplies for a trip to Calais and the refugee camp known as the ‘Jungle’. 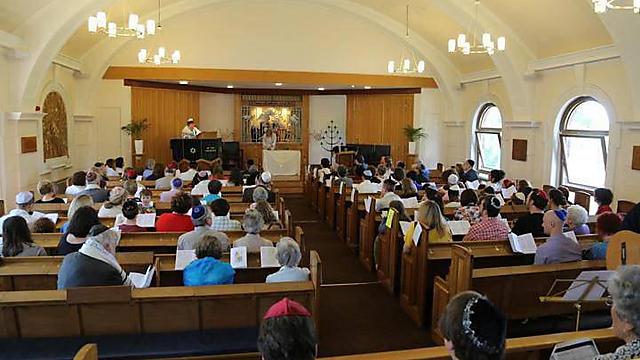 The South London Synagogue (Liberal) has been raising funds to transform a portion of the structure into living quarters for Syrian refugees; one family is currently being sheltered and further fundraising is being undertaken. It is part of a continuing initiative by synagogue members to provide aid to refugees from Syria. Synagogue members have begun construction on the section of the synagogue that will house the refugees. Photo from South London Liberal Synagogue

As reported in the Jewish News, at Northwood and Pinner Liberal Synagogue and Borehamwood & Elstree United Synagogue, banners were unfurled, reading “Refugees Welcome,”. Some communities offered their places of worship as temporary night shelters for refugees, if required.

“President Trump has signed an executive order that seeks to discriminate based totally on religion or nationality. We as Jews, perhaps more than any others, know what’s it’s like to be the victims of discrimination.”

“In the Jewish religion when it comes to acts of kindness and benevolence we recognise no borders. Wherever he or she might be they are counted as what we call mishpacha – part of our global family.”

Towards the other end of the Jewish religious spectrum, more than 40 British Reform and Liberal rabbis and cantors put their names to a letter to the Times again citing “the lessons of history”:

“Last week, Holocaust Memorial Day reminded us what happens when institutionalised hatred goes unchallenged…We urge Prime Minister May to convey to the President the lessons of history, and the potential consequences of deliberately directing the tools of State against a minority.”

In an attempt to recover from his hasty congratulations to President Elect Trump last November, even the Board of Deputies’ President, Jonathan Arkush, got in on the act of condemnation:

“…bans based on national origin are indiscriminate and unjust. They would be unlawful in U.K. law. While we all understand the need to properly check those who enter our countries, this needs to be balanced with compassion towards the plight of those fleeing for their lives.”

There was more evidence of our compassion towards refugees this week over the ending of the Dubs Amendment which had committed the British Government to take in 3,000 unaccompanied and highly vulnerable refugee children now scattered across Europe. 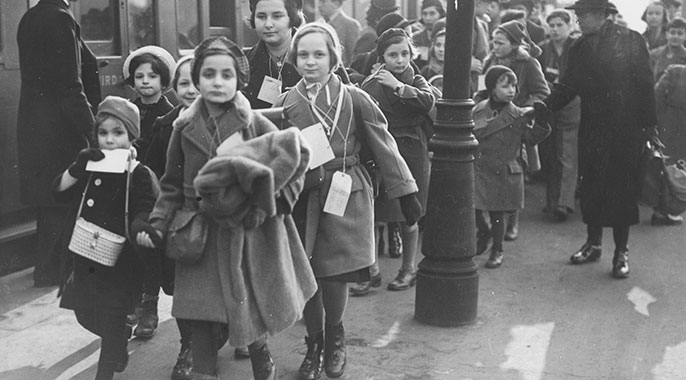 Lord Alf Dubs was himself part of the Kindertransport just before the War when Britain took in nearly 10,000 mostly Jewish children from Germany, Austria, Czechoslovakia and Poland. It’s an event that continues to inform the outlook of Jews in Britain towards refugees. The children of the Kindertransport were often the only members of their family who survived the Holocaust.

The Assembly of Reform Rabbis issued the following statement in anger at the dropping of the Dubs led initiative:

When Jews look at refugees, we see ourselves, remembering our historic identity as migrants and refugees. Our Reform Jewish values command and compel us to defend other refugees and we urge the Government to reconsider its decision.

Refusing to see the truth

I ought to be pleased that the Jewish community in Britain has taken such a strong and unified position towards refugees.

But instead of feeling pride in our solidarity, our calls for justice and our ‘Jewish humanitarian values’, I’m left feeling cold and despairing. And it’s all down to a collective Jewish denial that’s now in its 69th year.

Because it’s clear that for the Jewish Community not all refugees are equal. There are good refugees and bad refugees and there are the refugees we created and refuse to even see.

There are millions of them. And they are all Palestinian.

More than 30 years of Israeli Jewish academic research has failed to dent mainstream Jewish consciousness on what created Palestinian refugees and why they remain refugees today. It’s as if Benny Morris, Tom Segev, Ilan Pappe, Avi Shlaim, Simha Flapan, to name the most well known historians, never lifted their pens nor opened a file in the Israeli national archives.

My own generation still believe that the troubles of the Palestinians were entirely self-inflicted. That the Palestinians in 1948 fled of their own accord or were ordered to leave by advancing Arab armies.

But the truth has been widely available for decades.

They were intimidated, they were hounded, they were murdered. They were pushed out at gunpoint, their land was stolen, their property robbed, their villages destroyed. By us. By Jews. And it was done in the name of creating a Jewish majority for the Jewish State of Israel. And if that wasn’t the case, then why, when the fighting was over, did we refused to let the refugees return to their homes and to their land?

Take a look at the Jewish Voice for Peace factsheet if you want a brief summary of what happened.

So we’re great on refugees, as long as they’re not Palestinian.

If they are, then silence reigns.

No acknowledgement, no responsibility, no accountability.

This is why I find it so hard to listen to our communal protestations for justice when it comes to refugees from every other part of the world.

How can the best thing for refugees, and for Jews in particular, be liberal, tolerant democracies where all citizens have equal status and equal rights – apart from the State of Israel where the opposite seems to apply? There we insist on the right for Jews to have superior rights, the right to steal land, build walls, demolish homes and divide families. And we call all this safeguarding Jewish lives and Jewish values.

With all this, how can I look at 70 years of Palestinian abandonment by the worldwide Jewish community and then take these statements about other refugee communities seriously?:

“…bans based on national origin are indiscriminate and unjust.”

“When Jews look at refugees, we see ourselves, remembering our historic identity as migrants and refugees.”

“In the Jewish religion when it comes to acts of kindness and benevolence we recognise no borders.”

How can there be such a moral disconnect? The answer is straightforward but dangerous to articulate.

Our wholesale community endorsement of Zionism has wrecked our otherwise reliable moral compass. Our instincts, based on religious understanding and historical experience, are sound. But our commitment to Israel, as it’s currently constituted, screws things up, big time.

But we can’t see it or don’t want to acknowledge it. The consequences of doing so have become too great. Too much has now been invested in Israel as a core part of modern Jewish identity. And the worse culprits of this denial, and those least able to address the ethical dissonance, are our rabbis.

The most enlightened rabbinical response you can get to the oppression of Palestinians is to quote Leviticus 19:34

“…the stranger that dwells with you shall be to you as one born among you, and you shall love him as yourself; for you were strangers in the land of Egypt…”

But are we the strangers in the land or are they? Are we just using ancient scriptures to obscure a 20th century project of settler colonialism? Why does their 1,000 year presence on the land count for nothing against our short lived biblical Kingdoms shrouded in religious myth?

For the Jewish community in Britain, and across the world, Israel is not just a country where Jews live. It’s a modern miracle. It’s our post-Holocaust resurrection. It’s 3,000 years of Jewish continuity. It’s an existential necessity. It’s above and beyond normal political discourse. Consequently, we can’t handle any of the ethical catastrophes it’s created. Our loyalty to the concept of Jewish nationalism has denied to us the best of our ethical tradition.

But failing to acknowledge our collective responsibility for the ongoing Palestinian Nakba is just as big an obstacle to peace and reconciliation as the existence of the Settlements. But Jews who dare to stand up and point this out become marginalised, excluded and denounced.

Until we confront our complicity in the creation of the Palestinian catastrophe we will never be able to move towards a peace that honours and protects all who today call the land their home. And while we continue to ignore or deny our responsibility our insistence that we Jews welcome refugees is going to ring hollow – at least in my ears.