Outside the law: Israel's political prisoners

Infographic from Jadaliyya followed by article from IMEMC plus links to campaigns. 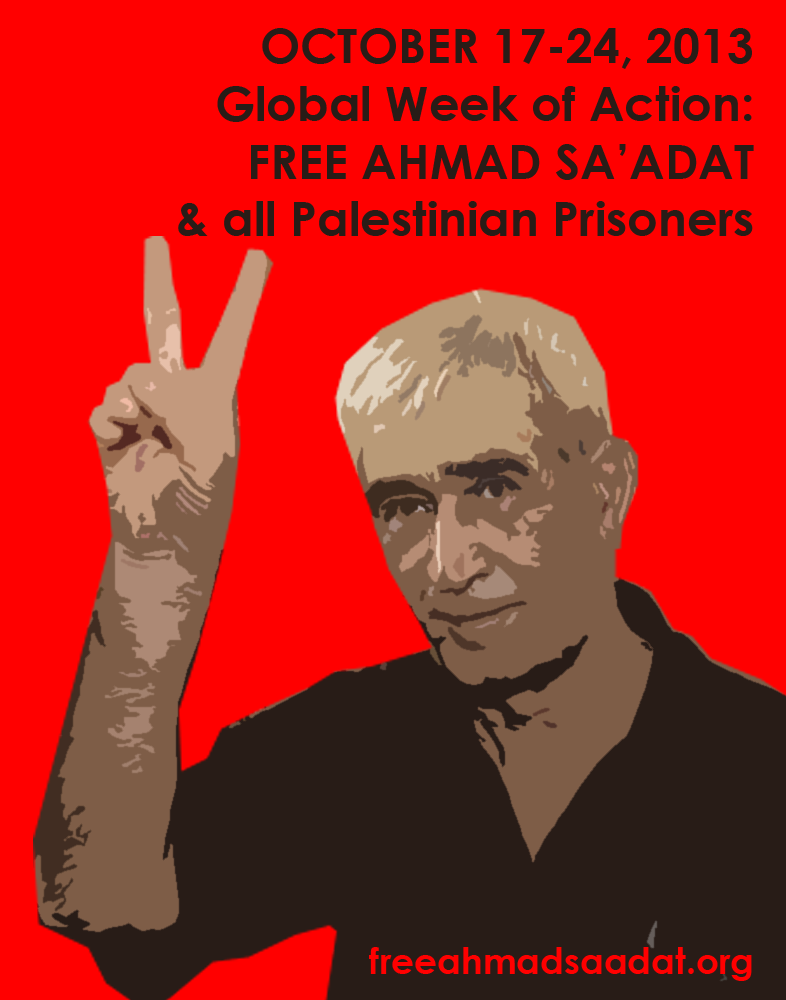 Ahmad Sa’adat is the General Secretary of the Popular Front for the Liberation of Palestine and a member of the Palestinian Legislative Council. He is not under administrative detention as a 2-person military ‘tribunal’ authorised his detention after the IDF abducted him from a prison in Jericho and transported him to Israel.

A Guide to Administrative Detention

In May 2012, over 2000 Palestinian prisoners and detainees went on hunger strike to challenge the conditions they face in the Israeli prison system. Not least, they called for an end to the practice of administrative detention, where Palestinians are held without charge or trial for months or even years. Despite drawing worldwide attention to the issue, administrative detention continues today.

The infographic “A Guide to Administrative Detention” takes the perspective of an administrative detainee as they face daily stresses, uncertainties and indignities. This experience ranges from simply not knowing what they are accused of, to realising that lawyers and humanitarian agencies can do little to help them.

The Palestinian Ministry Of Detainees has issued a press release revealing that Israel is currently holding captive 5,200 Palestinians in 17 prisons, detention camps, and interrogation facilities.

It said that this year witnessed a sharp escalation in arrests as the soldiers kidnapped 2,450 Palestinians, including 476 children and 49 women since the beginning of the year.

It said that the army kidnapped at least 600 Palestinian security and police officers, and that the number of Hamas affiliated detainees is 1100, and 365 detainees who are members of the Popular Front for the Liberation of Palestine (PFLP), while the rest are members of different factions.

The Ministry stated that Israel is currently holding captive 13 democratically elected legislators, and that the Israeli military kidnapped a total of 60 legislators and ministers (46% of the members of the Palestinian Legislative Council). Among the detained legislators are Marwan Barghouthi, Ahmad Saadat and Hassan Yousef.

Furthermore, the illegitimate Israeli policy of Administrative Detention without charges remains a systematic Israeli strategy despite repeated and extended hunger strikes by Administrative Detainees held under those arbitrary orders under “secret files” that neither the detainees nor their lawyers have no access to.

Currently, detainee Akram Al-Faseesy, from Ithna town, near the southern West Bank city of Hebron, is ongoing with his hunger strike that started on September 29 2013.

Palestinian detainees held under Administrative Detention orders started on October 10 a series of protests against their illegal detention, this includes returning meals, boycotting Israeli military courts, and a number of open-ended hunger strikes. Israeli border police arrest a boy for demonstrating at the entrance of the Jalama checkpoint, near the West Bank city of Jenin,  February 22, 2013. Photo by Saif Dahlah/ AFP

As for children and women currently held by Israel, the Ministry said that there are 250 children and 13 women who are still imprisoned, and that Israel soldiers kidnapped approximately 9500 children since the year 2000.

There are 520 Palestinian detainees who are serving a minimum of one life term; this includes detainee Abdullah Barghouthi who was sentenced to 67 life-terms and additional 250 years. He was taken prisoner on March 5 2003.

In its report, the Ministry said that Israel is ongoing with its illegitimate policy of depriving the ailing detainees from the urgently needed and specialized medical care, especially since there are currently 1400 sick detainees, including 25 suffering with different types of cancer.

The Ministry further stated that there are a number of detainees who are dying and are not receiving the needed extensive and specialized medical attention.

The oldest detainee held by Israel is Fuad Shobaky, 83 years of age, followed by Omar Akkawy, 64. The number of detainees who died in prison, either due to torture, or due to being shot by the soldiers during and after their arrest currently stands at 204.

Despite the seriousness of his condition, the Israeli Prison Administration did not grant Abu Hamdiyya the needed specialized and urgent medical treatment, until it was too late.

Detainee Arafat Jaradat, died at the Mejeddo Israeli prison, seven days after his arrest, he was a healthy young man from Sa’ir town in Hebron, and was tortured to death by Israeli interrogators.

The Ministry said that the detainees are suffering from abuse and various violations and attacks carried out against them, especially since Israel violated an agreement reached with the detainees in May of last year following an extended hunger strike.

Prisoners shown on a poster at a demonstration in support of Palestinians who are being held in solitary confinement and on administrative detention. In front of Ramle Prison, Israel, May 3, 2012.Photo by ActiveStills.