Orthodox men fight all out against women praying at Western Wall 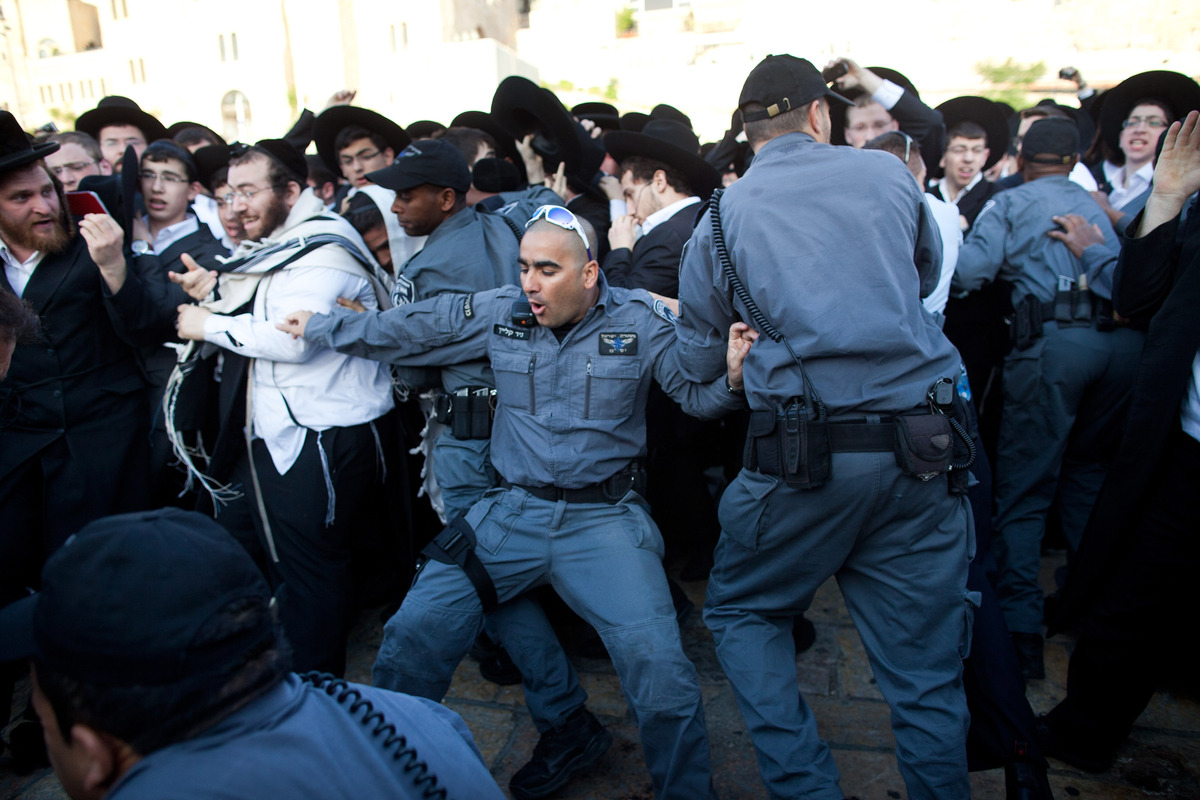 Following a Jerusalem district court ruling affirming the right of women to pray at the western wall, women hold a prayer service on the first day of Sivan at the Western Wall on May 10, 2013 in Jerusalem. Police hold back crowds of ultra-Orthodox  – who call the women ‘lesbians, whores and Nazis’ – from forcing the women away.

On exiles and the Holy Land

The Kotel, the Western Wall, is the holiest site in Judaism. Every year, hundreds of thousands of Jews visit to pay their respects to the holiest site. At any given moment, there are anywhere from 3-10 Bar Mitzvahs happening at once, as men and women pray at the foot of the wall, inserting hand-written notes and prayers in the spaces between the rocks. Because it is so imbued with holiness, it is the direction which diaspora Jews face in prayer. Jews worldwide have considered themselves to be in exile so long as they were not at the Holy Temple in Jerusalem, of which the Wall is the last remnant.

Jewish inhabitants of Jerusalem’s Old City would remove their shoes and pray in the holy grounds, in the 4m (or 13 foot) alleyway in front of the Wall, bounded by what was the Morroccan Quarter until 1948, when Jordanian forces assumed control of the West Bank, and the Western Wall with it. They forbade Jews from praying at the holiest site in the Jewish religion for the 19 years they were in control, until the Six Day War in 1967, when Israeli forces took control of the Egyptian Sinai peninsula, the Golan Heights and of course the West Bank.

In the three days following the Six-Day War, the Morroccan Quarter of the Old City of Jerusalem, an 800 year old community, was bulldozed to make way for a plaza for Jews to pray more comfortably at the holiest site in the world. In the days following the creation of the plaza the Jewish holiday of Shavuot, which celebrates the reception of the Ten Commandments at Mount Sinai took place. The Jerusalem Post described the celebration at the new plaza in front of the Western Wall:

“They came wearing holiday streimels [fur hats worn by Hasidic Jews], black silk kaftans [cloaks worn by Middle Eastern men] and white stockings, but also mini-skirts and a kova tembel [small caps typically worn by Israeli kibbutzniks], or a colorful, Kurdish gown. No one was too young to be carried or too old and infirm to be helped along the way.”

Until 1948, the Jewish men had been praying alongside Jewish women: the gendered segregation at the Kotel is a relatively new thing. Just weeks after the first Shavuot at the Wall, in July 1967, a mechitzah (gender separation barrier) was installed at the plaza. By the somber day of Yom Kippur in October, under the Ministry of Religious Affairs, the area at the Kotel had become a de facto Orthodox synagogue.

In exile
The Haredi (ultra-Orthodox) narrative considers Jews to be in exile, captive in a Zionist state. Its Jewish character, to them is a tragic, false facade and only with the establishment of the Third Temple on the Temple Mount (where the Haram ash-Sharif stands today), and the coming of the Messiah, do they believe there will be a truly Jewish State. Though they comprise less than 10% of the population of Israel and often live in insular communities, their rabbinate has the exclusive right to perform weddings, divorces and burials and until very recently, they enjoyed a total exemption from military conscription. 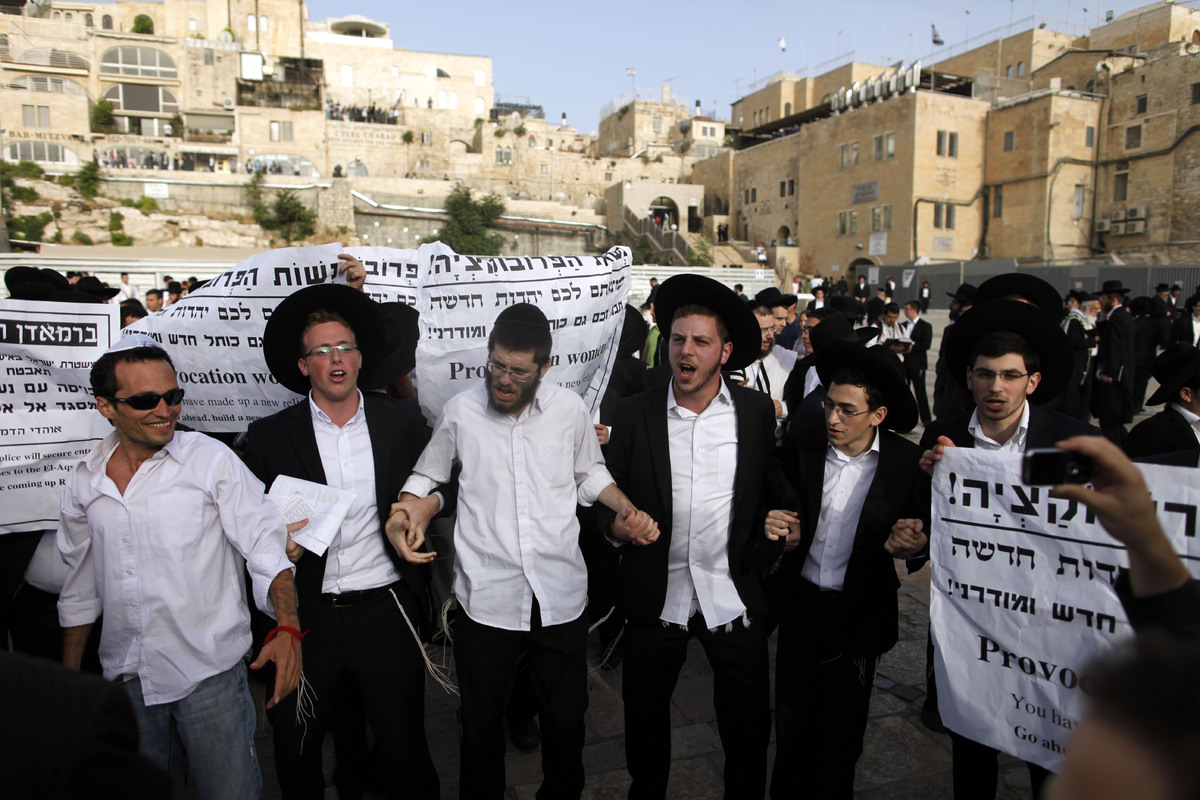 Ultra-Orthodox Jewish protestors dance as they protest against the religious group Women of the Wall who are marking the first day of Tammuz at the Western Wall on June 09, 2013 in Jerusalem. Photo by Lior Mizrahi/Getty Images.

Though their power is perhaps eroding nationally, they still retain considerable religious authority throughout the Jewish State.

The Women of the Wall are a group of male and female activists (though they aren’t fond of calling themselves that) who, for the last 24 years, have been conducting monthly services to mark the beginning of the Jewish Month (Rosh Hodesh). In the last few years, and in particular the last few months, their monthly practice of wrapping themselves in tallitot (prayer shawls), and holding a minyan of women who read from the Torah and recite the Kaddish (the mourners’ prayer) out loud, as men are traditionally compelled to, have made them the subject of intense debate. Their monthly prayer services in a method of prayer largely normalized within the rest of Reform Judaism (and fully accepted in other spaces), have been termed provocations and, absurdly been the basis of their arrests. In April one Jerusalem judge ruled that they weren’t violating the law or causing unrest by praying at the wall ‘according to their custom,’ nor were they in violation of ‘local custom,’ (a phrase left unclarified) and their behaviour therefore didn’t, and shouldn’t, constitute grounds for arrest, despite the Haredi protests.

In response to the ruling, Haredim mobilized further, and at the Women of the Wall’s Rosh Hodesh service on May 10, thousands started demonstrating. They threw chairs, spat on the women and called them whores and lesbians. This past week on July 8, in addition to 7,000 yeshiva girls who had been urged by their rabbis the day before to fill the women’s section of the Kotel plaza in prayer, another 1,000 men roared, clapped and sang to drown out the prayers of the 350 women and men who were conducting their Rosh Hodesh service behind a set of barricades. Police had barred the Women of the Wall from the women’s section at the plaza where they usually conduct their service, and were reserved a spot before the Haredi girls arrived. Though Women of the Wall had the legal right to pray there, and were even assigned a place adjacent to the Kotel, the group was effectively shut out, forced to conduct their service from the entrance to the plaza where police officers usually park their cars, away from the Wall. It was in fact the first time in Women of the Wall’s 24 years that they had been blocked from entering the women’s prayer area.

Stuart Charmé commented as follows, that before 1948,

Not only did women seem to be an important component in the activities at the Wall, but also their voices were accepted as part of the more frequent public, communal prayers taking place there. A little more than a century later, participation of this kind would be forbidden.

He wrote about the spectacle not only of the monthly Rosh Hodesh services that Women of the Wall use as their centerpiece, but the weekly Friday prayers, welcoming the Sabbath. The Women’s voices which once rose above the men’s, on a weekly basis, are now being silenced, we could even say in exile.

Haredi men spit at women and call them Nazis for praying out loud, with prayer shawls and kippot, in the manners to which they are accustomed. We Jews have a duty, and an urgent one at that, to think through what religious freedom means. Woe is us if a bunch of Haredi men get to decide it for us in their despicable monthly coup d’états.

Below: Women of the Wall wear Tallit, the traditional Jewish prayer shawls, as they pray at the Western Wall in Jerusalem’s Old City on May 10, 2013 marking the first day of Sivan. Over 1,000 ultra-Orthodox men were being kept away from the group after a court ruled they could do so. Police arrested three ultra-Orthodox men and detained another two’for public disturbances. Photo by Gali Tibbon, AFP/Getty Images) 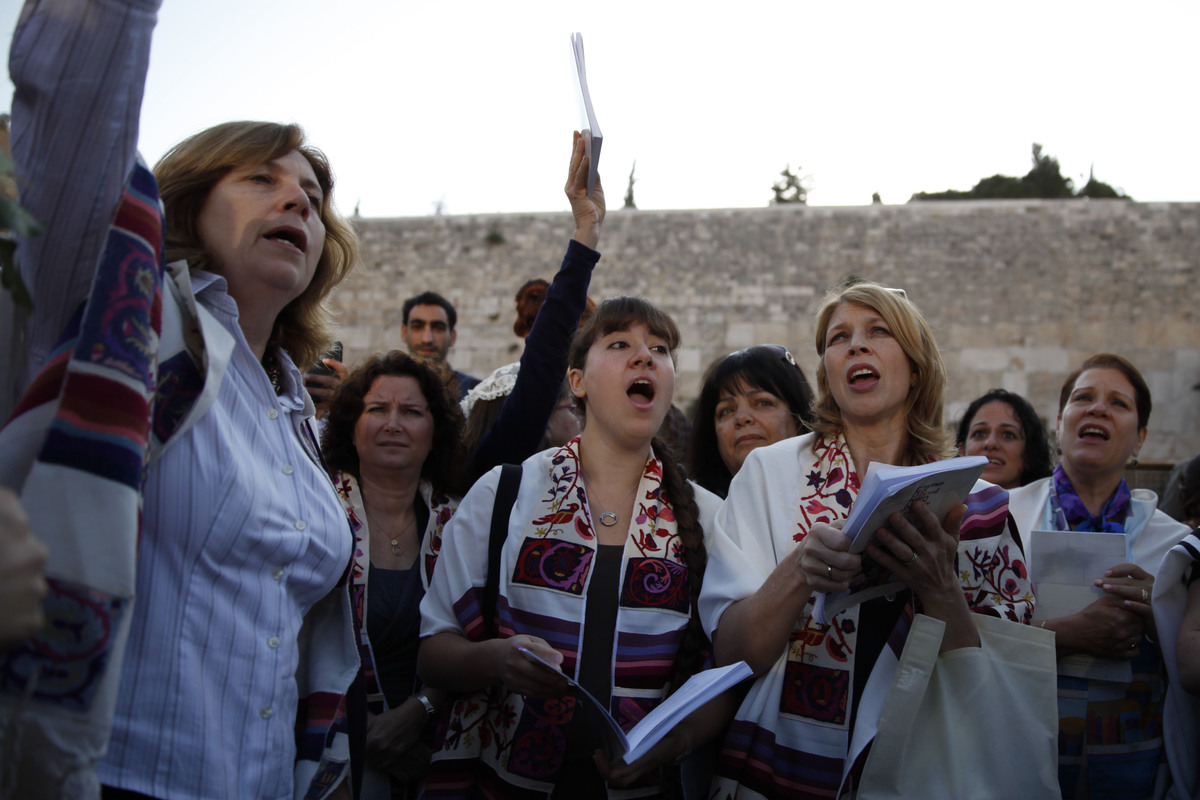 Omer Harari is currently a Master’s student at Haifa University’s Peace & Conflict Management Studies program in Israel. He can be found on twitter @omerrrr

The right of women to pray at the Western Wall has been referred to a number of courts. The conflict is between religious freedom (the women) and respecting tradition (the orthodox men.) For a summary see Women of the Wall, Legal Struggle.