Order to confiscate land of Israeli citizens (they are Bedouin) 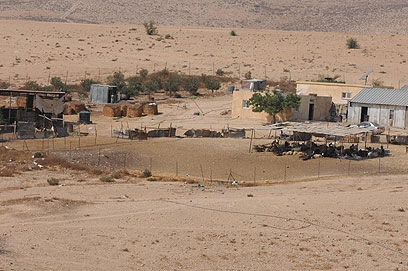 Government’s decision to convert Umm al-Hiran into Jewish settlement enrages Bedouin residents; ‘You can’t just take an Arab and put a Jew in his place. This is Nakba of 2012,’ they say

The continuous struggle of the Bedouin community in southern Israel has once again caused a stir with a move Bedouins are calling “racist.”

“We will continue fighting. We will not leave our land,” residents of Umm al-Hiran, an unrecognized Bedouin village in the Negev slated for demolition, said. The government intends to build a new Jewish settlement called Hiran in place of the village.

“They say they want to evict us because of illegal construction,” Salim Abu Al-Kian, 53, told Ynet. “We are ready to reach a settlement on the matter. We’re willing to get permits for homes that have yet to receive them. Unfortunately, the state does not want to help us. They want to expel us from our land. We have no value to them,” he said.

After a stretched out legal battle, the National Council for Planning and Construction rejected the motion submitted by the Bimkom organization and Adala, the Legal Center for Arab Minority Rights in Israel, and approved the government’s plans to establish a new Jewish village in northern Negev.

The new village will be built in place of the Bedouin village which currently houses 500 people.

Amna Abu Al-Kian said that she would be willing to die before leaving her home. “I have six children and we have nowhere else to go to.”

“Instead of the state helping us, we are thrown out to the street like animals,” she exclaimed.

‘We can live alongside Jews’
Other residents of the Bedouin village could not understand the council’s decision and offered an alternative solution. “We wouldn’t mind living alongside Jews. I wouldn’t object to us being neighbors,” said Salim Abu Al-Kian.

Another Bedouin resident said “we’re citizens of the state of Israel. Israel claims to be a democratic country but it has neglected its citizens for decades. Why not recognize our rights? We have been the most loyal to Israel since its establishment. They can’t keep pushing us into a corner.”

Attorney Suhad Bshara from the Adala Center said that the “government’s decision coincides with Israel’s policy to expel the Bedouin residents from their lands and destroy their homes in order to clear the land for Jewish settlements.”

The authority charged with regulating Bedouin towns in the Negev said that many of the residents have already found a solution – they are to move to the nearby newly-constructed Bedouin village of Horah.

Hassan Shaalan contributed to this report

On 24 September 2012, a subcommittee of the National Council of Planning and Building (NCPB) rejected an appeal from Adalah and Bimkom against Master Plan 15/02/107 for the planned Israeli Jewish town of Hiran. Adalah and Bimkom brought the appeal in the names of Arab Bedouin families, citizens of Israel, living in Umm el-Hieran in the Naqab (Negev) desert against a decision by the District Planning Committee to approve the Master Plan and build “Hiran”, a new town for Jewish families to be constructed on the ruins of Umm el-Hieran, home to 1,000 residents in 150 families. The organizations first submitted an objection against the plan in January 2011.

In a unanimous decision, the Committee members noted a previous decision made by a subcommittee of the NCPB on the Master Plan for Metropolitan Beer el-Sabethat stated that, “the town of Hura provides a housing solution for the tribe of Abu al-Qian…” and that the town of Hiran is not intended for Bedouin residents. Members of the appeals committee added that on various occasions, State representatives described Hiran as a town for Jewish residents only; they meant that the town would be for all segments of the Jewish-majority society. The committee offered three options to the residents of Umm el-Hieran: move to the town of Hura; obtain vouchers to buy land in Hiran; or try to reach an agreement with the Israel Lands Administration (ILA) on a detailed plan for their homes within the scope of the proposed plan for Hiran.

In the wake of the decision, Adalah Attorney Suhad Bishara stated that the policy conforms to State’s policy of confiscating Arab Bedouin land in the Naqab, demolishing the villages and forcing residents to move to crowded and severely limited townships. The Abu el-Qi’an case is consistent with this policy, whereby the tribe was expelled from its land and Jewish residents were given their land in 1948, and then later, they were expelled again.

The Committee’s decision assumes that the residents of Umm el-Hieran, who were relocated to the village in 1956 by state authorities, have no right to their village, and that the State can easily move them from place to place without any justification or need for a plan for them. The decision entrenches a discriminatory policy of segregated housing, based on national, religious and ethnic separation, and infringes on the citizens’ constitutional rights to dignity, property, and equality.

Prior to 1948, the villagers lived in Khirbet Zubaleh, located in Wadi Zubaleh, which is now part of Kibbutz Shuval. In 1948, the Israeli Military Governor in the Naqab ordered the residents to leave their village and their homes and move to the area of Kharbet el-Hazil, and then again to Kohli and Abu Keff. In 1956, they were again displaced to Wadi Atir, where they have remained until today. The villagers were then given 7,000 dunams of land to live on and cultivate, and they built houses of brick and cement, making great effort to recreate the community that had been disrupted with each forced displacement. Now 150 families, 1,000 people, all of the Abu al-Qian tribe, live in Umm el-Hieran.