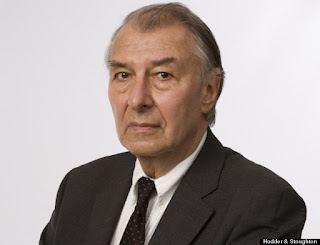 I first met Irving Weinman many years ago on a Palestine solidarity demonstration in Brighton.  Irving was a gentle giant of a man, who was born in Boston, USA and educated at Trinity College in Dublin and Cambridge University.

Irving was a prolific and much respected author and poet and wrote a number of books explaining the art of creative writing.  He was also a lawyer and had a wonderful wry sense of humour.

Irving was also a Jewish anti-Zionist and a long-standing supporter of the Palestinians.  A few years ago he went to Gaza to deliver much needed aid but unfortunately was prevented, over a period of over 3 weeks, from entering Gaza by the Egyptian police state, which did and still does do Israel’s bidding.

Israel’s Yad Vashem has a category of ‘righteous gentile’ – those non-Jews who put their own lives at risk in order to save Jews during the holocaust.  Irving was one of that rare breed, a righteous Jew, who realised that the Palestinians are today’s Jews of the Middle East.   He stood up against the racist messianic fundamentalism which has gripped Israel and is leading it towards a modern day version of Armageddon.

I talked to him a number of times about how Israel has taken on many of the characteristics of the antisemitic European states that Jews fled from in the past century, including Nazi Germany.  Israel’s definition of itself as a Jewish state, its demographic obsessions and its concern with who was born in the night, are they Jewish or an Arab, whose desire for an ethnic-religious purity mirror’s Hitler’s concerns for Aryan racial purity.

It is little wonder that Netanyahu seeks to pin the blame for the holocaust on the Palestinians, with his suggestion that the  Mufti of Jerusalem Hajj amin al-Husseini was responsible for persuading Hitler to exterminate the Jews.  Hitler have been more than willing just to expel them.

I had the good fortune to attend a memorial meeting in Irving’s memory today in Lewes, where he and his partner, Judith Kazantzis lived.  Judith, who is also not well, was Irving’s devoted companion and a noted poet in her own right.  She always accompanied Irving on demonstrations and to meetings in Brighton.  Both of them came on the pickets of Sodastream in Brighton, where we managed, over the course of nearly 2 years to shut down an Israeli shop in Brighton that traded in the stolen goods of the Palestinians on the industrial park of Mishtor Adumim on stolen land on the West Bank. 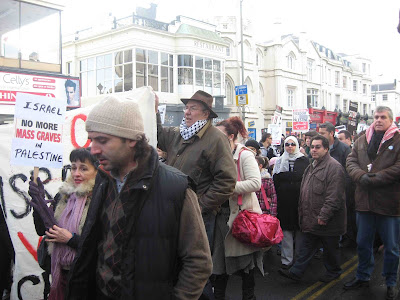 Irving in a brown hat on demonstration against the attack on Gaza, January 11, 2009.

I learnt much about Irving today that I hadn’t known beforehand, in particular about his literary and poetic achievements.  He was indeed a man of the world and he will be sorely missed, not only by his family but by the Palestine solidarity movement and Jewish anti-racist and anti-Zionist groups.

Irving was a member of Jews for Justice for Palestinians because he felt a particular responsibility, as someone who was Jewish, to speak out against the mass murder and expulsions perpetrated against the Palestinian people in the name of Jews, by the so-called Jewish state.  Irving stood in an anti-racist tradition that went back to the Jewish fight against anti-Semitism in Europe, not the Zionist tradition of anti-Arab racism.  Irving was proud to be Jewish.  His attitude to Israel’s war crimes was ‘not in my name’.

We salute you Irving.  You will always be in our thoughts.  Lotta continua.

Irving’s parents were shtetl Jews from Romania who lived in Paris before emigrated to Boston in the thirties where Irving was born in 1937.

His mother spoke seven languages and Irving grew up hearing mainly Yiddish, Russian and French, and also much music in the house. Irving had recently  written fiction about the pogroms, and spoke of his mother to me after I returned from Odesa last year – he was very taken by the fact I had seen Isaac Babel’s drinks cabinet in the city’s small Jewish museum.

Irving was also a talented musician, jazz piano being his first love before switching allegiance to literature. He attended writing classes with Sylvia Plath and Anne Sexton in his youth, co-founded the Key West Writers Workshop, and as well as novels, poetry and short fiction more latterly wrote books on the craft of fiction.

He was married for thirty five years to the poet Judith Kazantzis, and together the couple were staunch members of BHPSC. As well as participating in local protests, Irving co-founded British Writers In Support of Palestine, helping to run letter writing campaigns promoting the cultural and academic boycott of Israel; he also spent four weeks in 2010 as a driver for the Road to Hope Convoy to Gaza, about which he blogged en route.  A dear friend to so many, he will be sorely missed.