No Xmas lights for state that is ‘light unto nations’

Articles from JTA and Times of Israel 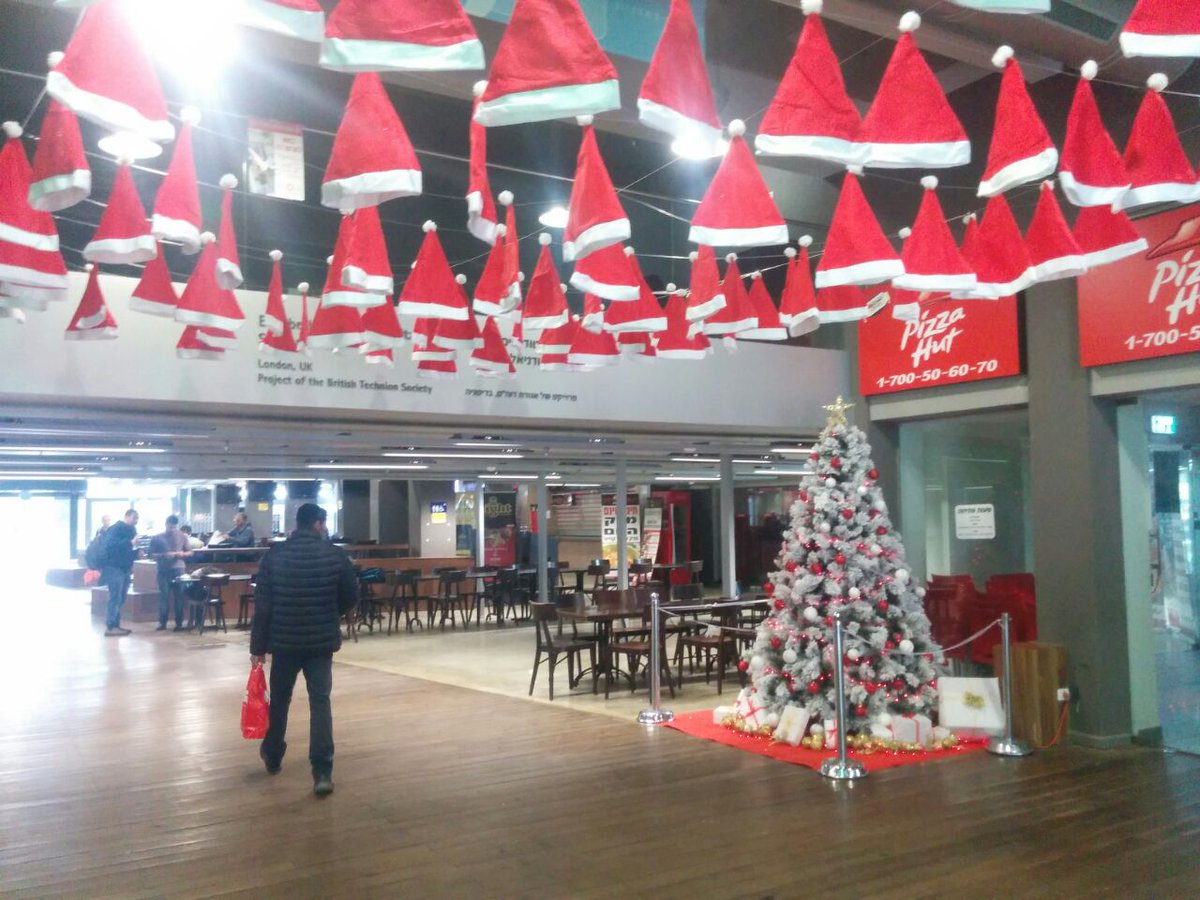 ‘Tis the season, but some Israeli rabbis are not feeling the Christmas spirit.

Rabbinic officials in Jerusalem and northern Israel recently issued separate statements saying that displays of Christmas trees are against Jewish law. Other Israelis rushed to the defence of the ornamented evergreens.

The difference of opinion over Christmas highlighted disagreement about the role of religion in the Jewish state.

In a letter that emerged Tuesday, the Jerusalem Rabbinate urged hotels in the city not to put up Christmas trees this year.

“As the secular year ends, we want to remind you that erecting a Christmas tree in a hotel contravenes halacha and that therefore it is clear that no one should erect [a tree] in a hotel,” Ashkenazi Chief Rabbi Yona Metzger and Sephardi Chief Rabbi Shlomo Amar wrote to hotel managers.

The letter also said it was “appropriate to avoid hosting” New Year’s parties, reminding hotel managers that the New Year is properly observed at the beginning of the Jewish calendar.

A day earlier, the rabbi of the Technion-Israel Institute of Technology, a prestigious public science and engineering university in Haifa, forbade students from entering the student union on campus because of the presence of a Christmas tree in the building.

“The Christmas tree is a religious symbol — not Christian, but even more problematic — pagan,” Rabbi Elad Dokow wrote in a Q&A on the religious Srugim website. “Halacha clearly states that whenever it is possible to circumvent and not pass through a place where there is any kind of idolatry, this must be done. So one should not enter the student union if it’s not necessary to do so.

“This is not about freedom of worship. It’s about the public space of the campus,” he added. “This is the world’s only Jewish state. And it has a role to be a ‘light unto the nations’ and not to uncritically embrace every idea.”

Dokow compared the Christmas tree’s display to letting students declare that Jerusalem does not belong to the Jewish people or allowing a Spanish food festival that “prominently featured pork.”

Israel’s Basic Laws, which serve as a provisional constitution, enshrine its status as a “Jewish and democratic state.” But the proper balance of these two parts of Israel’s identity is an open question.

The Supreme Court in Israel has consistently protected the right to freedom of religion, which it finds in a constitutional law protecting “human dignity and liberty.” How far that right extends into the public arena is unclear.

A private hotel, though it serves the public, has clearer discretion regarding religious expression than a public university, said Shuki Friedman, a religion and state researcher at the Israel Democracy Institute think tank.

Friedman said it also depends on who is using the space. In Nazareth, an Arab-Israeli city in northern Israel with a large Christian population, a public Christmas tree would clearly serve the local population, he said. Conversely, Friedman added, the Western Wall is “one place there will not be a Christmas tree.”

The Chief Rabbinate — the highest Jewish authority in Israel and overseer of the Jerusalem Rabbinate — last year offered some protection to displayers of Christmas trees. Under threat of a petition to the Supreme Court, the Chief Rabbinate issued guidelines stating that its kashrut inspectors could not revoke the kosher certifications of hotels over the trees or Shabbat violations.

The Technion responded to its Christmas tree controversy with a statement saying that Rabbi Dokow’s words “expressed his personal opinion and not that of the Technion.”

“Even before the Technion opened its gates about 100 years ago, its founders stated that the institution they hoped to build would be open to all, irrespective of religion, ethnicity and gender,” the statement said, noting that religious and secular Jews, Muslims, Christians, Druze and Circassians from around Israel and the world study “side by side” there and students of “all religions and communities” help manage the student union.

“The union, it goes without saying, celebrates all the Jewish festivals and, concurrently, it allows students from other religions to express themselves with respect and tolerance. The different festivals are celebrated in a range of ways, including, in this case, a Christmas tree beside the Hanukkah menorah.”

Knesset member Yousef Jabareen of the Joint List of Arab political parties accused Dokow of incitement. In a letter [sent on] Monday to the Technion’s president, Peretz Lavie, Jabareen said,

There’s no need to elaborate on the gravity of these statements, and the serious offence to the Technion’s Arab students and to Israeli Arabs in general. These statements contain clear incitement to racism, in violation of the law, and therefore also constitute a serious criminal offence.
Haaretz

According to Haaretz, Technion student Peter Hana said “an absolute majority of students, as well as management and the dean,” supported the Christmas tree, and “only a handful of students and the rabbi himself chose to come out against it.”

The Jerusalem rabbinate has called on hotels in the city not to erect Christmas trees or host New Year’s Eve parties, according to a letter that emerged Tuesday.

The letter, addressed to hotel managers and signed by the two chief rabbis of Jerusalem, stated:

As the secular year ends we want to remind you that erecting a Christmas tree in a hotel contravenes halacha [Jewish law] and that therefore it is clear that one should not erect [a tree] in a hotel.

It is also appropriate to avoid hosting parties to mark the end of the secular year. We wish to remind you that our new year occurs on the first of [the Hebrew month of] Tishrei, in an atmosphere of holiness, with the happiness of mitzva.

Although the letter does not threaten sanctions, it could be interpreted as a veiled threat, in contravention of guidelines issued by the Chief Rabbinate in 2015 asserting that kashrut inspectors could not revoke the kosher certification from hotels and other establishments over photography, music or movie screenings on Shabbat, or if a Christmas tree was displayed during the holiday season. 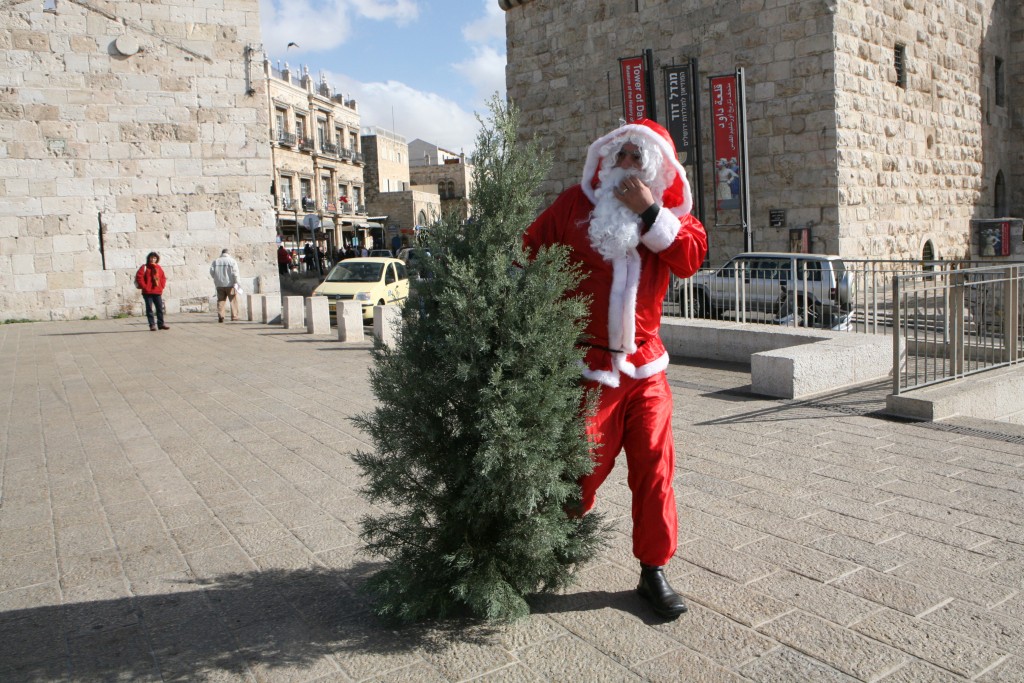 One of the city’s many Santa Clauses passes the Jaffa Gate in the Old City of Jerusalem. Photo by Yossi Zamir/Flash90

A spokesperson for Israel’s Chief Rabbinate said that the letter was not connected to the kashrut licensing authority. “This was a private initiative from the Jerusalem rabbinate. The purpose was to request that [hotels] remove Christmas decorations out of consideration for the feelings of those members of the public who observe mitzvot,” he told the Kipa website.

The Israel Hotels Association said it was concerned the directive could prove detrimental to Christian tourism.

Last year’s guidelines were issued following a petition by the Israeli group Hiddush*, which threatened to appeal to the Supreme Court if the existing regulations weren’t changed.

Hiddush said the Chief Rabbinate had been in violation of the Kosher Fraud Law established in 2013, which states that “the kashrut inspector should only consider standards of kashrut alone in certifying an establishment as kosher.”

According to a Supreme Court ruling, basing an establishment’s kosher certification on considerations such as Sabbath observance or modesty was in contravention of the law.

Uri Regev, CEO of Hiddush, said on Monday, “We have heard of [local] rabbinates that do not consider themselves bound by the law or the ruling of the Supreme court. We understand the sensitive situation that hotels find themselves in, and offer our assistance in enforcing the law against renegade rabbinates, which are publicly funded by the state but disregard its laws.”

Separately, the rabbi of the Technion Institute of Technology in Haifa forbade students to enter the student union building due to a Christmas tree placed there.

Rabbi Elad Dokow, writing on the Srugim website, described the tree as an attack on Jewish identity. “It is not a Christian religious symbol but, even worse, a pagan one,” he wrote. Therefore he said, students may not enter the building to purchase food or for any other reason.

He described the tree as “anti-Jewish,” not simply as anti-religious.

MK Youssef Jabareen of the Joint (Arab) List wrote to the head of the Technion calling the rabbi’s words were incitement to racism, Haaretz reported, and saying that such an attitude harms relations on campus between Jews and Arabs. He called on the Technion to dismiss the rabbi.