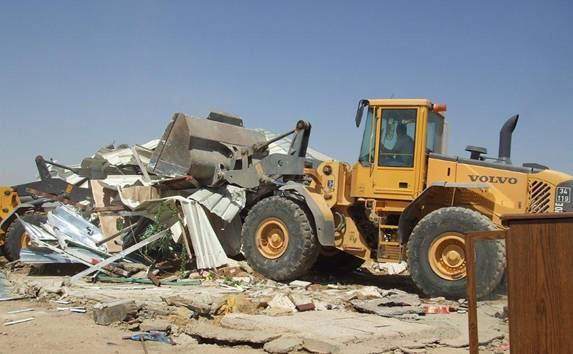 A Bedouin home demolished in minutes. Many Palestinian homes are, of necessity, made of cheap materials and can easily be knocked by Israel’s array of bulldozers (Caterpillar, JCB, Volvo).

BETHLEHEM — Thirty-six international charities and human rights groups on Wednesday released a statement calling for an immediate end to the demolition of Palestinian homes in the occupied West Bank and East Jerusalem.

The groups — among them Amnesty International, Oxfam and Save the Children — co-signed a statement denouncing Israeli house demolitions in the occupied Palestinian territories.

“Since the resumption of the peace process in July, Israel has destroyed 207 Palestinian homes and property in the occupied West Bank, displacing 311 Palestinians, over half of whom are children,” a statement from the Association of International Development Agencies said.

A child stands among his family’s belongings after a home demolition in the Jordan Valley. Photo by flickr/PSP Photos.

“These demolitions, in areas under Israeli control, have driven Palestinian families from their communities and their land, increasing poverty and the need for humanitarian assistance.”

House demolitions are often carried out to facilitate the expansion of illegal Israeli settlements and the destruction of civilian property is a violation of International Human Rights Law and International Humanitarian Law, AIDA added.

But larger property can be knocked down too – here eight homes in a four-storey block owned by the sons of Mohammed Hammad in Sur Baher, East Jerusalem

On 29th October, the Israeli government demolished a four-story apartment block in Beit Hanina, bringing the total number of Palestinian structures demolished in East Jerusalem in 2013 to 96 which displaced some 400 people from their homes. On the day that the Israeli government announced the construction of yet another 1500 housing units in the East Jerusalem settlement of Ramat Shlomo, and another 3500 in the West Bank, it issued demolition orders for 2000 housing units in the East Jerusalem areas of Ras al-Kahmis and the Shuafat Refugee Camp. On 25th November, the Israeli government approved the construction of 829 new homes in the West Bank settlements of Givat Zeev, Nofei Prat, Shilo, Givat Salit and Nokdim.
House demolitions and forced evictions are among Israel’s most heinous practices in the Occupied Palestinian Territory (OPT) and they also continue to be carried out on a broad scale within the state of Israel.

• Since 1967, Israel has destroyed more than 28,000 Palestinian structures in the OPT – (homes, shops, livestock facilities and other structures vital to Palestinian life and livelihood

• Since the renewal of “negotiations” in August 2013, Israel has destroyed approximately 25 Palestinian homes and dozens of other structures, leaving approximately 200 people homeless

•According to the UN, between January and September 2013, demolitions carried out by the Israeli authorities displaced 862 Palestinians compared to the 2012 total of 886 (including 468 children)

Current EU Actions Regarding the Recent Demolitions and Settlement Building

The longstanding position of the EU regarding settlements (all are illegal under international law) has been reiterated in successive Council Conclusions on the Middle East Peace Process in 2009, 2010, 2011 and 2012. The EU Heads of Mission Report of 2011/2012 stated, “The European Union is deeply dismayed by and strongly opposes Israeli plans to expand settlements in the West Bank, including in East Jerusalem, and in particular plans to develop the E1 area.” The Conclusions also stated that the EU would closely monitor the situation on the ground and its broader implications, and that it would act accordingly. In a statement delivered in the UN Security Council on 24 April 2013, the EU reiterated that Israeli settlement activities, which are illegal under international law, constitute an obstacle to peace and undermine the viability of the two-state solution.

The EU frequently criticises Israel’s ongoing demolition of Palestinian homes and its continued settlements building as reflected in the ENP Progress Report published by the European Commission. Nevertheless the EU has never conditioned its bilateral relations with Israel on freezing either demolitions or settlement building.EU institutions, including the European Parliament, have failed to use their declaratory diplomacy to effectively address the ongoing displacement and dispossession of the Palestinian people.

Therefore ICAHD and ECCP call upon the EU to:

• Act on its declared positions to ensure that the Israeli government abides by its international obligations, particularly in ending its home demolition and settlement policies, using the powerful instruments – economic and political – at its disposal.

• Immediately suspend the signature of any new agreement, including the Horizon 2020 agreement presently under discussion, as long as these demolition orders of Palestinian houses,and construction orders for the settlements, have not been cancelled,

• Seriously consider and prepare to suspend its Association Agreements with Israel, as well as Israel’s participation in other EU programs, as long as Israel does not comply with international law.

Only the determined enforcement of international law and human rights conventions (the Fourth Geneva Convention in particular) combined with a zero-tolerance policy towards such cruel actions as home demolitions and illegal settlement construction, will in the end force Israel to relinquish its occupation altogether.