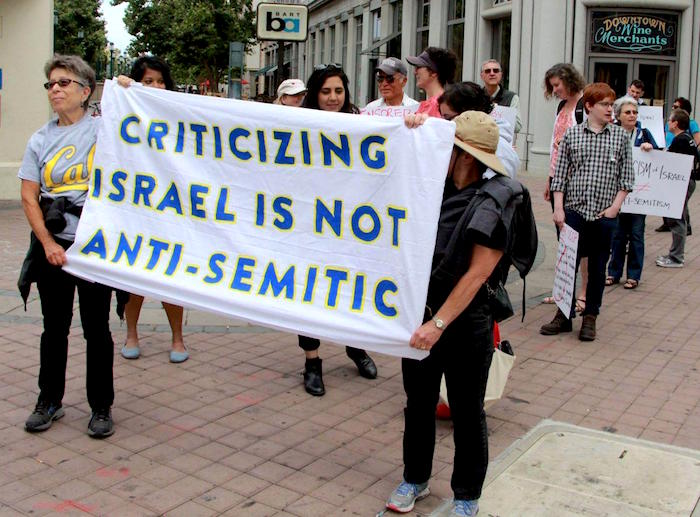 Increasingly, students on American campuses perceive advocating for justice in Palestine as a moral imperative. The steady growth of the Boycott Divestment and Sanctions (BDS) movement for Palestinian freedom has been met by a wave of legislation aimed at punishing or suppressing our 1st amendment rights to free speech and silencing student activism. The latest of these bills is the Anti-Semitism Awareness Act, introduced yesterday by U.S. Senators Bob Casey (D-PA) and Tim Scott (R-SC), which redefines anti-Semitism to include criticism of Israel.

Ostensibly, according to Senators Casey and Scott, the purpose of the legislation is to “ensure the U.S. Department of Education (DOE) has the necessary statutory tools at their disposal to investigate anti-Jewish incidents”, implying previous investigations by the DOE, which failed to substantiate accusations of anti-Semitism, lacked sufficient tools to criminalize activism critical of Israel on campus.

The EUMC definition was crafted as a tool for data collectors in European countries to identify what to include and exclude from their reports about antisemitism, and to have a common frame of reference so that data might be compared across borders. …

But to enshrine such a definition on a college campus is an ill-advised idea that will make matters worse, and not only for Jewish students; it would also damage the university as a whole.

December 1, 2016 – The United States Senate is due to consider the “Anti-Semitism Awareness Act,” a bill that, rather than fight anti-Semitism as it purports to do, will enable a crackdown against activism for Palestinian human rights on college campuses. Introduced and fast-tracked this week by Senators Bob Casey (D-PA) and Tim Scott (R-SC), the bill would codify a controversial State Department definition of anti-Semitism that broadly defines criticism of the state of Israel as anti-Semitic.

The bill is supported by the American Israel Public Affairs Committee, the Jewish Federations of North America, the Anti-Defamation League, and the Simon Wiesenthal Center.

Given the silence of most of those organizations on the appointment of Bannon, an actual white supremacist anti-Semite to a position of power in the White House, and their poor track records of Islamophobia, it is outrageous that they are pushing through this legislation targeted at student activism for Palestinian human rights.

Instead of fighting the anti-Semitism entering the White House, this bill will go after 19-year-old students carrying protest signs against human rights abuses. This is not how to fight anti-Semitism, this is a recipe for restricting civil liberties like the right to criticize a government for its policies.

The legislation would codify a problematic definition of antisemitism that right-wing Israel advocates have been trying for years to implement on college campuses in order to police student criticism of Israeli policy. The State Department’s definition of antisemitism includes vague wording regarding “demonizing” the state of Israel that can and has been interpreted to stifle legitimate criticism of Israel’s human rights abuses and discriminatory policies. Civil rights groups, free speech advocates and news outlets including the Los Angeles Times editorial board have raised free speech concerns about the implementation of this definition. Kenneth Stern, the lead author of the European Monitoring Centre’s definition upon which the state department definition is based, stated that to use this definition on college campuses would “do more harm than good.”

We must be vigilant to fight against the intensified racism, Islamophobia and anti-Semitism that have been unleashed by Trump’s campaign and the threat of racist, anti-Muslim and anti-immigrant policies promised by his incoming administration. It is more essential than ever that our lawmakers and Jewish communal leaders insist that fighting anti-Semitism go hand in hand with fighting racism and Islamophobia, not reinforce them with misguided legislation designed to defend Israeli policies, not Jews.

As Trump calls for jailing flag burners, every lawmaker must stand up to protect cherished First Amendment freedoms to criticize the government. That includes the right of college students to criticize the U.S. and foreign governments like Israel. Regardless of one’s views on Palestine-Israel, we should all be alarmed at this attempt to pile on top of Trump’s attacks on free speech rights. It is plainly unconstitutional for Congress, the Department of Education, a state legislature, or any public school to punish campus speech critical of Israel.