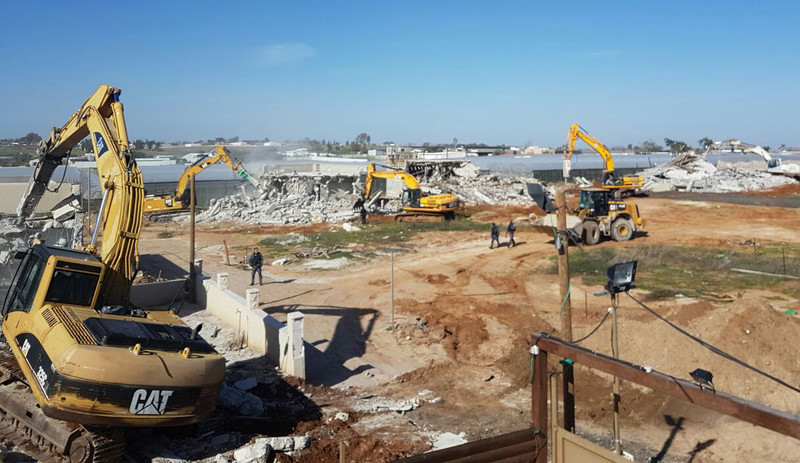 Destruction of Palestinian homes on Palestinian private land in Qalansawa, Israel. “They turned the town into one big military zone,” said journalist Samira Haj Yahia, who witnessed the demolitions. “We initially thought that they came to destroy one home. But we were stunned to see nine bulldozers and a massive police presence.” Electronic Intifada, January 2017.

While in Dostoyevsky’s famous novel, the criminal returns to the crime scene, the recent law of banditry and new settlement crimes passed by the Israeli Knesset has the criminal repeating his crime without realising he is thus uncovering his original crime committed in 1948, which he has deceived the world about for years when he robbed the Palestinians of their land after expelling most of them, destroying 400 Palestinian villages and intentionally Judaicising their towns such as Safad, Haifa and Akka.

Since the creation of “Israel” in 1948, we have not seen such arrogance and audacity as that of Netanyahu, Naftali Bennett, Lieberman and Shaked, who recently claimed the West Bank is part of Israel and there is no place for a Palestinian state. Also, that they will annex the majority of the territories of the West Bank.

“The new law of theft” as described by Benny Begin, son of Menachem Begin, who could never be accused of being biased to the Palestinians, not only aims to legitimise annexing private Palestinian land to build illegal and illegitimate settlements, but goes even further. Namely, annexing West Bank territories without their population and eliminating the possibility of creating an independent Palestinian state. Overall, it definitively qualifies “Israel” as an apartheid and racist state, far more racist than the apartheid regime in South Africa.

Israel would not have dared commit this new crime if it wasn’t for the silence about its blatant crimes, Arab preoccupation with their own calamities, inter-Palestinian divisions, and the world’s hypocrisy about a “two-state” solution without the courage to impose sanctions on Israel. But enough is enough. It is time to exact punishment for the crime. There is no room for complacency or inaction or neglect. 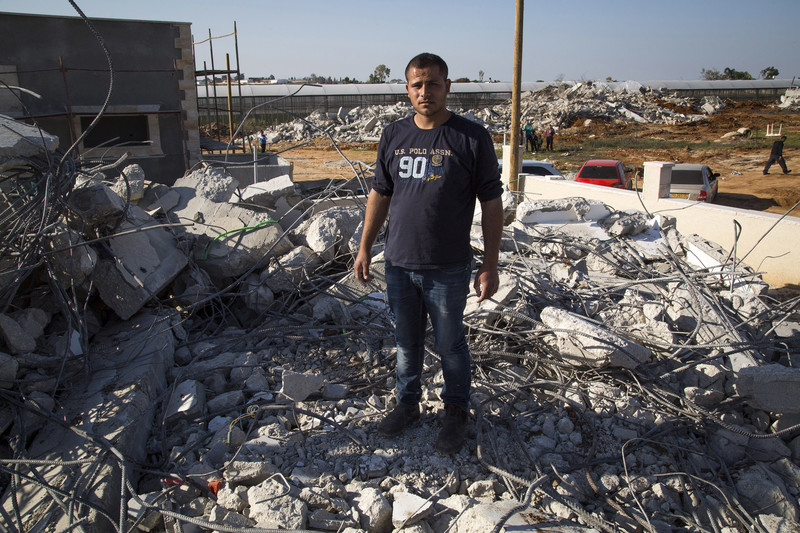 Amer Makhlouf is among those whose homes were demolished in Qalansawa, a town in Israel, on 10 January. Photo by Keren Manor/ ActiveStills

Israel will never be deterred unless sanctions are enforced and ties are severed and all forms of normalisation are rejected. Most importantly, rejecting the dangerous idea proposed by Washington to hold an Arab-Israeli security meeting after all it has done. Israel will not be deterred unless it is immediately and without hesitation referred to the International Criminal Court and all forms of security coordination with Israel are severed.

Each European country that believes in a two-state solution must now recognise the Palestinian state if it has not done so already. Each country that respects and upholds international law must now tell Israel it will impose sanctions if it does not desist and rescind the law of theft and end settlement activities.

The world is witness to instances when failure to protect international law resulted in serious consequences, with the rise of Nazism and fascism, and subsequent calamities for humanity as a whole.

We, Palestinians, who are steadfast in our homeland, will remain as we are. A thorn in the side of our oppressors, a weight on their chests, patient in the face of their arrogance, clenching the smouldering coal to protect our rights, history and identity.

Palestinian physician, activist, and politician, Mustafa Barghouti serves as General Secretary of the Palestine National Initiative (PNI), also known as al Mubadara. He has been a member of the Palestinian Legislative Council since 2006 and is also a member of the Palestine Liberation Organization (PLO) Central Council. He was nominated for a Nobel Peace Prize in 2010 by Mairead Maguire, who won the prize in 1976. He is also a tireless advocate of nonviolent resistance against occupation and has served as the President of the International People’s Health Council.

There is no crime without punishment.

“Today, the Israeli Knesset shifted from a path to establish a Palestinian state, to a path of extending sovereignty to Judea and Samaria. Let there be no doubt, the Regulation Bill is what will spearhead the extension of [Israeli] sovereignty,” said a smiling Education Minister Naftali Bennett, head of the Jewish Home party, after the coalition agreed to forge ahead with the measure.

Last week, when we visited Ofra, we heard from the residents who were placing their hopes in Prime Minister Benjamin Netanyahu and the Bayit Yehudi ministers passing the “Regulation Bill” that would retroactively legalize their homes, sparing them from demolition. Two days later, after Donald Trump was elected president of the United States, they sounded far more optimistic. Now, they’re hoping the momentum created across the Atlantic Ocean would embolden the government to pass the “Regulation Bill.”