Illustrative: Construction work in the Dagan neighborhood of the settlement of Efrat, in the West Bank on July 22, 2019

Prime Minister Benjamin Netanyahu said in an interview Thursday that Palestinians living under Israeli rule in an annexed Jordan Valley would not receive Israeli citizenship.

Palestinian towns and villages in the area will remain “Palestinian enclaves” under Palestinian rule but Israel security control, he explained.

In a separate interview Thursday, Netanyahu dismissed fears increasingly expressed by settlers leaders regarding the US peace plan’s vision for the West Bank, saying that the mapping process is ongoing and that they were criticizing elements of the plan that still haven’t been determined and published. 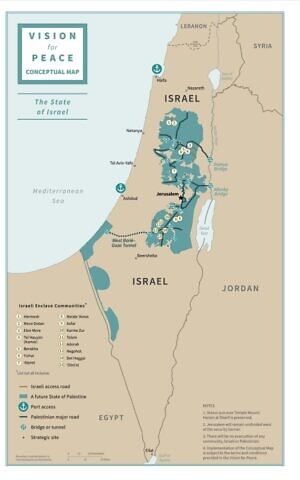 Vision for Peace Conceptual Map published by the Trump Administration on January 28, 2020.

Speaking to the right-wing Makor Rishon newspaper, Netanyahu said he didn’t believe Jordan would annul the peace accord if Israel goes forward with his declared plan to annex some West Bank land including the Jordan Valley, and said any settlement construction freeze as part of the Trump plan would also apply to Palestinians in Area C — which is controlled by Israel.

Netanyahu said he was committed to extending Israeli sovereignty to parts of the West Bank in July, after a joint Israeli-US team completes a process of mapping the exact vision for the future of the territory based on a conceptual map released by US President Donald Trump’s administration earlier this year.

Many settler leaders have expressed concern about the Trump plan’s inclusion of a Palestinian state, even though it outlines many conditions for that state that are vehemently opposed by the Palestinian Authority, which has rejected the plan outright, calling it biased in favor of Israel.