Palestinian students hold a knife during an anti-Israel protest in the city of Khan Yunis in the Southern Gaza Strip, Oct. 18, 2015. Photo by Said Khatib/ Getty Images

BETHLEHEM — The majority of Palestinians support the recent string of stabbing attacks against Israelis, a poll released on Monday found.

During the past two-and-a-half months, 119 Palestinians have been shot dead by Israeli military and civilians, many of which were killed after alleged, attempted or actual attacks against Israelis, and 19 Israelis have been killed by Palestinian attackers.

According to PCPR’s poll, 37 percent of Palestinians believe that the current upheaval will turn into a full-on armed Initifada, with only 10 percent believing that the confrontations will gradually dissipate.

The recent wave of violence launched following a build-up of tensions over the summer.

At the end of July, Israeli settlers set a Palestinian home ablaze in the northern occupied West Bank district of Nablus, killing three out of four family members in the home.

The Dawabsha family’s 18-month-old infant was burned alive inside the home, while the mother and father succumbed to their wounds weeks later while being treated at Israeli hospitals. The family’s 4-year-old son is the only remaining survivor of the attack.

Soon after, Palestinians began accusing Israeli authorities of attempting to shift the status quo around the Al-Aqsa Mosque compound, the third holiest site in Islam, which is venerated by Jews as the Temple Mount.

The Israeli government denied the allegations, but continued to impose extra restrictions on Palestinian worshippers attempting to visit the site while allowing right-wing Jews to tour the area.

By the end of September tensions were running high, and as Palestinians held protests against changes at the Al-Aqsa Mosque, the blame for the restrictions was laid on right-wing settler groups who were vocally encouraging Israelis to flock to the compound.

Some of the more extreme groups have continued to call for the demolition of the mosque and the construction of the Temple Mount on the site. 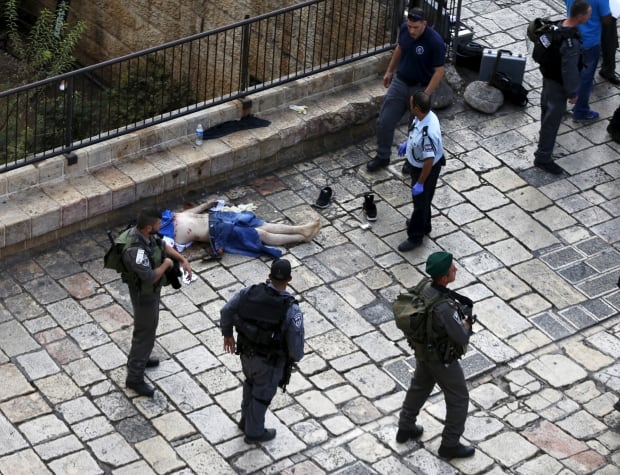 Israeli security forces stand by the body of a Palestinian they shot dead after he wounded two Israeli police officers with a knife in Jerusalem’s Old City on Saturday October 10th. Photo by Ammar Awad/Reuters

On Oct. 1 tensions snapped when a Palestinian shot and killed two Israeli settlers in a drive-by shooting not far from where the Dawabsha family was murdered. Reprisal attacks began immediately, with Israel’s extremist settlers attacking Palestinian villages for the next several days.
On Oct. 3, a Palestinian stabbed and killed two Israelis and injured two more in an attack outside East Jerusalem’s Old City. The Palestinian attacker was shot dead at the scene.
Multiple stabbing attacks have since been reported on a weekly basis, with Israeli forces adopting what Amnesty International has dubbed a policy of “extrajudicial” killing against the Palestinian population.

In addition, Israeli leaders have called for and implemented various forms of collective punishment initiatives in an attempt to deter violence and enhance security, including neighbourhood closures, curfews, flying checkpoints and punitive home demolitions on the families of accused attackers.

While both the Israeli government and Palestinian Authority have called for calm, the violence has continued at a steady pace well into December.