Life of a salesman

THERE ARE two different opinions about Binyamin Netanyahu. It is difficult to believe that they concern the same person. One is that Netanyahu is a shallow politician, devoid of ideas and convictions, who is led solely by his obsession to remain in power. This Netanyahu has a good voice and a talent for making shallow speeches on television, speeches devoid of any intellectual content – and that’s all.

This Netanyahu is highly “pressurable” (a Hebrew word invented almost solely for him), a man who will change his views according to political expediency, disclaiming in the evening what he has said in the morning. None of his words should be trusted. He will lie and cheat anytime to assure his survival.

The other Netanyahu is almost the exact opposite. A principled patriot, a serious thinker, a statesman who sees danger beyond the horizon. This Netanyahu is a gifted orator, able to move the US Congress and the UN plenum, admired by the great mass of Israelis.

So which of these descriptions is true? Neither.

IF IT is true that the character of a person is shaped by his early childhood, we must examine the background of Netanyahu in order to understand him. He grew up in the shadow of a strong father. Benzion Millikowsky, who changed his foreign name to the Hebrew Netanyahu, was a very dominant and very unhappy person. Born in Warsaw, then a provincial town in the Russian Empire, he immigrated to Palestine as a young man, studied history at the new Hebrew University in Jerusalem and expected to become a professor there. He was not accepted. 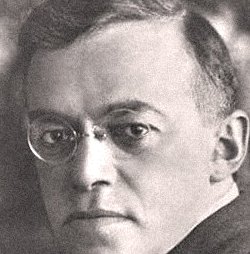 Ze’ev Jabotinsky; in 1923 he published an essay (in Russian) titled The Iron Wall. Jabotinsky argued that the Palestinian Arabs would not agree to a Jewish majority in Palestine, and that “Zionist colonisation must either stop, or else proceed regardless of the native population. Which means that it can proceed and develop only under the protection of a power that is independent of the native population – behind an iron wall, which the native population cannot breach.”[ The only solution to achieve peace and a Jewish state in the Land of Israel, he argued, would be for Jews to first establish a strong Jewish state, which would eventually prompt the Arabs to “drop their extremist leaders, whose watchword is ‘never!’ and pass the leadership to the moderate groups, who will approach us with a proposal that we should both agree to mutual concessions.”- from Wikipedia. In later life, he did in fact argue for equality between Jews and Arabs in Palestine.

Benzion was the son of an early adherent of Vladimir (Ze’ev) Jabotinsky, the extreme rightist Zionist leader. He inherited from his father a very extremist outlook, and passed it on to his three sons. Binyamin was the second one. His elder brother, still a child himself, called him Bibi, and the childish appellation stuck.

Benzion’s rejection by the prestigious young Hebrew University turned him into a bitter man, a bitterness that lasted until his death in 2012, at age 102. He was sure that this rejection had nothing to do with his academic qualification, and everything with his ultra-nationalist opinions. His extreme Zionism did not stop him leaving Palestine and seeking his academic luck in the United States, where a second-rate university gave him a professorship. His life’s work as a historian concerned the fate of the Jews in mediaeval Christian Spain – the expulsion and inquisition. It engendered in him a very dark world view: the conviction that Jews will always be persecuted, that all Goyim (non-Jews) hate the Jews, that a straight line connects the auto-da-fé of the Spanish inquisition with the Nazi Holocaust.

During the years, the Netanyahu family went back and forth between the US and Israel. Binyamin grew up in America, acquired perfect American English, essential for his future career, studied and became a furniture salesman, until he was discovered by the far-right Likud foreign minister, Moshe Arens, who sent him to the UN as Israeli spokesman.

BENZION NETANYAHU was not only a very bitter person, who accused the Zionist and Israeli academic establishment of failing to recognize his academic stature. He was also a very autocratic family man. The three Netanyahu boys lived in constant awe of Father. They were not allowed to make any noise at home while the Great Man worked in his closed study. They were not allowed to bring other boys home. Their mother was completely devoted to her husband and served him in every way, sacrificing her own personality. In every family, the second child of three is in a difficult position. He is not admired like the eldest, nor indulged like the youngest. For Binyamin this was especially hard, because of the personality of the eldest.

Yonatan Netanyahu (both names mean “God has given”) seems to have been a specially blessed boy. He was good-looking, gifted, much liked, even admired. In the army, he became the commander of the revered Sayeret Matkal (“General Staff Commando Unit”) – the elite of the army’s elite. As such he was the ground commander of the daring 1976 Entebbe commando raid in Uganda, which liberated the captive passengers of a flight hijacked by Palestinian and German guerillas on the way to Israel. Yonatan was killed and became a national hero. He was also adored by his father, who never quite accepted the qualities of his second son.

Between his father, the embittered Great Thinker, and his elder brother, the Legendary Hero, Binyamin grew up as a quiet but very ambitious boy, part Israeli, part American. Between his obsessive need to be approved by his father and to be found equal to his glorious brother, Netanyahu’s own character was forged. His father never quite appreciated him, once saying that he would make a good foreign minister, but not a prime minister.

Yonatan Netanyahu, in front, the only commando to be killed on the Entebbe raid.

Being his father’s son, Netanyahu incited the people against Yitzhak Rabin after the Oslo Agreement and was photographed on the speaker’s balcony during the demonstration in which a symbolic coffin of Rabin was carried around. Soon after, when Rabin was murdered, he denied all responsibility. Rabin’s successor, Shimon Peres, failed miserably, and Netanyahu became prime minister. It was a total catastrophe. On the evening after the next elections, when it be came clear that he had lost, multitudes streamed to Tel Aviv’s central square (now named after Rabin) in a spontaneous demonstration of joy like that at the liberation of Paris. 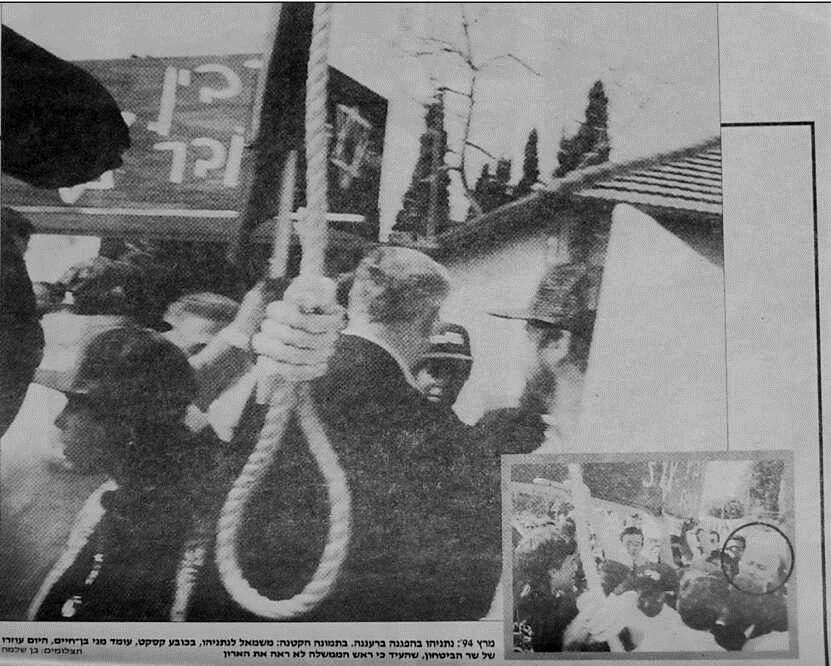 Netanyahu denounces the ‘traitor’ Yitzhak Rabin to a crowd with a noose and a coffin as props. Rabin was assassinated shortly afterwards, on November 4th 1995. Newspaper photo from Tikun Olam via Mondoweiss.

His successor, Labour’s Ehud Barak, had no more luck. A former army Chief of Staff, admired by many and especially by himself, he compelled President Bill Clinton to convene an Israeli-Palestinian peace conference at Camp David. Barak, who was quite ignorant of Palestinian attitudes, came to dictate his terms and was shocked when they were rejected. Coming home, he declared that the Palestinians want to throw us into the sea. Hearing this, the public threw him out and elected the tough far-right general, Ariel Sharon, the founder of Likud. (Netanyahu became Minister of Finance. As such he was quite successful. Applying the neo-liberal ultra-capitalist teaching he had absorbed in the US, he made the poor poorer and the rich richer. The poor seemed to like it.) Sharon was the father of the settlements in the West Bank. To strengthen these, he decided to give up the Gaza Strip with its few settlements, which were a disproportional drag on the army. But his unilateral retreat from the Gaza Strip shocked the rightist camp. The elder Netanyahu called the move a “crime against humanity”.

Impatient with opposition, Sharon split the Likud and founded his own Kadima (“Forwards”) party. Netanyahu again became the leader of Likud. As usual, he was lucky. Sharon suffered a stroke and fell into a coma, from which he never recovered. His successor, Ehud Olmert, was accused of corruption and had to resign. The next in line, Tzipi Livni, was incompetent and unable to form a government, though all the ingredients were there. Netanyahu, the man who was kicked out just a few years earlier by the cheering masses, came back as an imperator. Again the masses cheered. Shakespeare would have loved it.

SINCE THEN, Netanyahu has been elected again and again. The last time was a clear personal victory. He vanquished all his competitors on the Right.

So who is this Netanyahu? Contrary to popular opinion, he is a man of very strong beliefs – the beliefs of his far-right father. The entire world is out to kill us at all times, we need a powerful state to defend ourselves, all of the land between the Mediterranean and the Jordan has been given us by God (whether he exists or not). Everything else is lies, subterfuges, tactics.

When, in a famous speech at Bar-Ilan university near Tel Aviv, Netanyahu embraced the principle of “Two States for Two Peoples”, those who knew him could only smile. It was as if he had recommended the eating of pork on Yom Kippur. He dangled this statement before the eyes of the naive Americans and let his Justice Minister, Tzipi Livni, lead endless negotiations with the Palestinians, whom he despises. Whenever it seemed that the negotiations were nearing some goal, he quickly put up another condition, such us the ridiculous demand that the Palestinians recognize Israel as the Nation State of the Jewish People. He would not dream, of course, of recognizing the Palestinian territories as the Nation State of the Palestinian People – a people he does not really believe exists at all.

On the eve of the last election, just now, Netanyahu announced that there would not be a Palestinian state as long as he was in power. When the Americans remonstrated, he repudiated himself. Why not? As his Likud predecessor, Yitzhak Shamir, famously said, “It is permitted to lie for the Fatherland.” Netanyahu will lie, cheat, repudiate himself, raise false flags – all for the purpose of achieving his one and only real goal, the Rock of our Existence (as he loves to say), the heritage of his father – the Jewish State from the sea to the river.

Netanyahu’s solution to this problem is to ignore it. Just go on, enlarge the settlements, and concentrate on the immediate problem: install his fourth government and plan for his fifth, four years from now.

And, of course, show his father, who is looking down on him from heaven, that after all little Bibi, his second son, is worthy of him.

Benzion Netanyahu, b. Benzion Mileikowsky , and wife  Cela / Zila with, from L, no. 2 son Binyamin, No. 3 son Iddo and No. 1 son Yonatan