The article by Jonathan Freedland is second, Deborah Maccoby’s response to it is first. Most of the photos come in between. 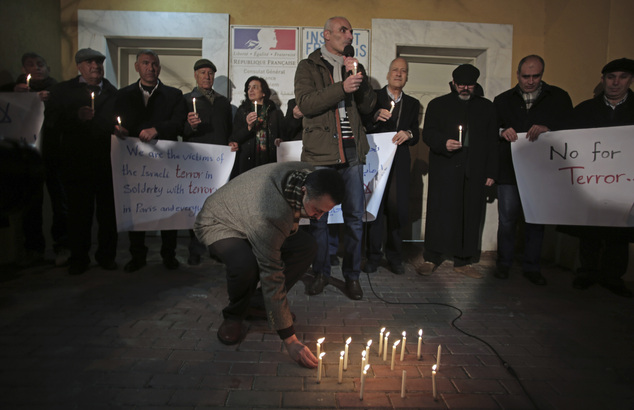 Palestinian leaders of civil society groups hold a candlelight vigil in solidarity with France and to condemn Paris assault and shootings outside the French Cultural Centre in Gaza City, Sunday, Jan. 11, 2015. Photo by Khalil Hamra / AP

What Jews can learn from Muslims

Jonathan Freedland (First they came for the cartoonists, then they came for the Jews, 10 January, see below), claims that Jews are targeted simply as “a kind of ultimate symbol of the west”, as a result of “a curious kink in the ultra-Islamist mindset”, or as the traditional scapegoat of European fascists.

But the Israeli government, with its new bill proposing to make Israel the nation-state of all the Jews in the world, and Jewish organisations such as the Board of Deputies, with their claim that the majority of Jews support Israel’s oppressive policies, contribute to the conflation of Jews with Israel and the subsequent rise in antisemitism and attacks on Jews.

To point this out is not of course to justify the conflation of Jews with Israel, just as it is wrong and unjustifiable to identify jihadis with Muslims. But the recent massacre in France of 17 people was purportedly carried out in the name of Islam; and the swift and powerful condemnation issued by Muslim groups all over the world will help to reduce anti-Muslim feeling and deter young Muslims from joining the jihadis.

This condemnation by Muslims contrasts strongly with the support given by most Jewish communal associations around the world to Israel’s massacre last summer of over 1,400 civilians, including over 500 children, in Gaza.

If world Jewish organisations were to learn from their Muslim counterparts and say loud and clear in response to Israeli atrocities “not in my name”, this could help to reduce antisemitism and make the recruitment of young Muslims by jihadis more difficult. Despite Freedland’s claim that Jews have “no control” over Israeli policies, such condemnation could also exert strong pressure on the Israeli government to stop its atrocities and enter into genuine peace negotiations with the Palestinian unity government.

French Muslim Fouad Hacine went to the demonstration with his home-made placard: ‘I am a Muslim come to share our pain.’ 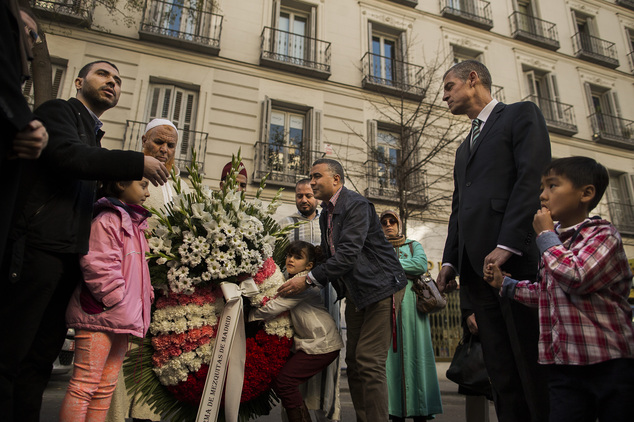 Outside the French Embassy, Madrid,  Sunday, Jan. 11, 2015. Representative of the Islamic community of Madrid, centre, offers a funeral wreath to the French Ambassador to Spain,  Jerome Bonnafont, second right, in support of the victims who were shot by terrorists at the Charlie Hebdo satirical journal and the kosher store in Paris last week.  Photo by Andres Kudacki/ AP Muslim women hold posters and placards in Madrid on January 11, 2015 during a show of solidarity following three days of bloodshed. Photo by Gerard Julien / AFP 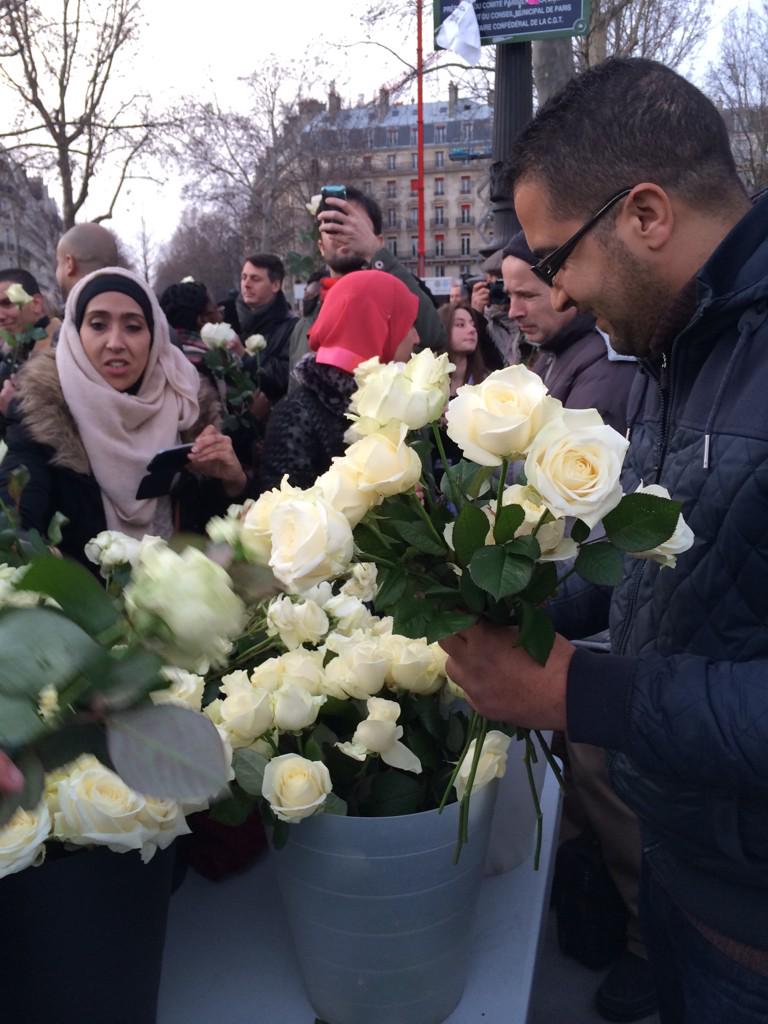 ‘Muslims of the Basque coast in solidarity with the families of the victims’.Tweeted by @MorineauLoic) January 11, 2015 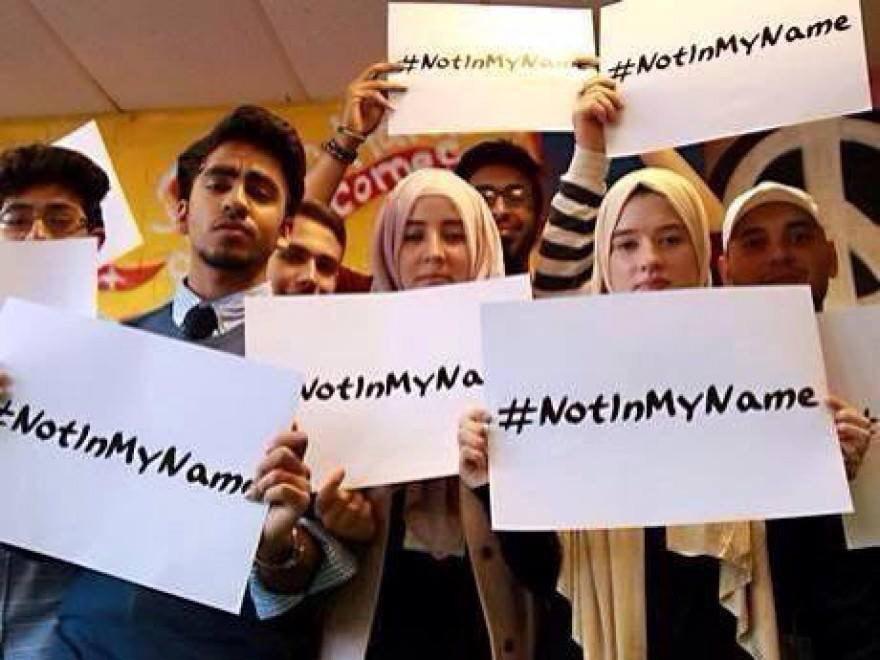 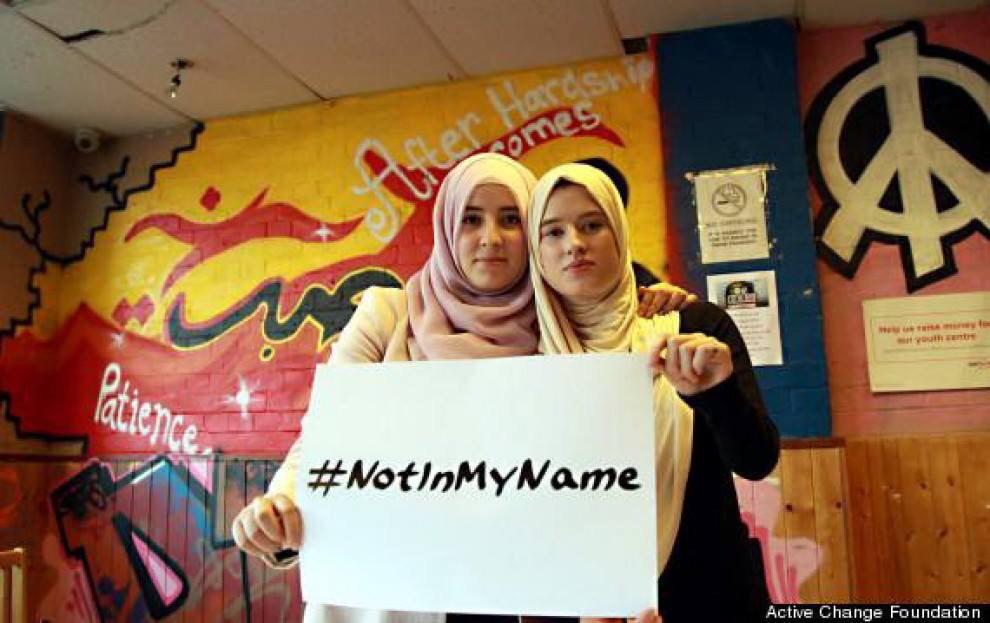 Tweeted by Elanor Who, January 8th. No details people or place.

By Jonathan Freedland, The Guardian
January 09, 2015

When terror strikes, we all become mind-readers. With no words to accompany the violence, it’s left to us to supply the motive. We insert our own guess, ventriloquising the killers who remain enigmatically mute. It happened again this week, following the slaying of 12 people at the offices of the Charlie Hebdo magazine with little more than an “Allahu Akbar” to go on. They hated the cartoons, we say. Free speech was the target, we declare. They wanted to silence satire and gag dissent.

Then on Friday, a siege at a kosher supermarket, four hostages confirmed dead, the murderers apparently linked to those behind Wednesday’s carnage. Oh, we say. So perhaps the killers’ problem was not with ugly cartoons or vicious depictions of Muhammad after all. Maybe their motive is of a different order, one we find much harder to comprehend. Perhaps the murderers are bent on killing people not only for what they do, but for who they are.

It’s hard to live in a senseless world so people, even well-intentioned people, will try to make sense of this latest, desperate twist in Paris. So far there have been mercifully few attempts to make the usual, kneejerk move, insisting that the animating grievance must be western foreign policy. It is hard to draw that conclusion when the targets have been a satirical magazine and a shop selling salt beef and pickles. Some will doubtless talk about Muslim antagonism to Israel, as if an infant in a kosher deli is somehow responsible for the conduct of a government 2,000 miles away.

Others might note the curious kink in the ultra-Islamist mindset that has anointed Jews as a kind of ultimate symbol of the west. Witness the Iranian newspaper that in 2006 responded to the Danish cartoons affair with a competition for “the best Holocaust caricatures”, as if the most efficient way to hit back at Europe was by attacking … Jews.

The irony is, of course, bitter and deep: it was not that long ago, within living memory in fact, that most of the nations of Europe either participated in, or did little to halt, the near-successful attempt to rid the continent of Jews once and for all. No matter. To a certain strain of thinking, one embodied in France by the Jew-baiting so-called comedian Dieudonné M’bala M’bala, the best way to attack “the system” or “the establishment” is to wound Jews.

So there’s little surprise the jihadists who turned Paris into a war zone turned their guns sooner rather than later on Jews. That’s what happened in Mumbai in 2008 and again in Toulouse in 2012, when Mohammad Merah killed a rabbi and three children at a Jewish school, pulling an eight-year-old girl by her hair to shoot her in the head.

Or maybe that is to overthink it. Perhaps we should simply see the perpetrators as the latest in a long line of murderous fascists, defined as such by their choice of targets. They hate dissent, they hate satire and, as fascist tradition demands, they loathe Jews.

Whatever else comes out of this bleak week, perhaps now there can at least be some clarity. There can surely be no doubt now – as to what we’re up against. It is a murderous cult. And, at the risk of mind-reading, it seems bent on fusing itself with Islam, claiming to act in the name, and on the authority, of that faith.

It follows that our responsibility is to thwart that effort. For Muslims, that has meant spelling out that these killers speak only for themselves. Note the speed with which a delegation of 20 imams visited the Charlie Hebdo offices, branding the gunmen “criminals, barbarians, satans” and, crucially, “not Muslims”.

Of course they should not have to do it. The finger-wagging demand that Muslims condemn acts of terror committed by jihadist cultists is odious: it tacitly assumes that Muslims support such horror unless they explicitly say otherwise. The very demand serves to drive a wedge between Muslims and their fellow citizens. (As it happens, Jews have some experience of this feeling: we too are sometimes told we have to condemn this or that action taken by others – and over which we have no control – if our place in polite society is to be secure.)

So no one else should demand it. But when it comes, as it did so rapidly and spontaneously this week, it speaks with an extra power.

If the challenge, then, is to frustrate the killers’ desire to fuse themselves with Islam, then that puts a burden on non-Muslims too. They have to take great care that nothing they do, especially in response to this threat, treats the Muslim majority and the jihadist cult as if they were one group. They are not. Our politicians have to observe that distinction in every decision they take. If a policy appears aimed at Muslims rather than at the handful of jihadist fanatics, then it’s the wrong policy.

Those of us in the media have a version of that obligation too. Wednesday’s deaths brought a loud chorus insisting that Charlie Hebdo was vulnerable because it had been left out on a limb. That was down, they said, to the cowardice of the rest of the press, lacking the guts to do what the French magazine had done. Now, if the declarations of Je Suis Charlie were to mean anything, papers like the Guardian ought to make amends and either republish the magazine’s offending cartoons or do its own depictions of the prophet – just to prove that it could.

Behind this argument is an assumption that Islam is a unique case. Yet for that to be true, a paper like the Guardian would be running images every day that it knew trampled on the sensibilities of, say, women or Jews or people of colour or myriad others – holding back only when it came to Muslims and what matters to them. But that’s not how it is. Mostly we do our best, not always successfully, to avoid causing that kind of pain.

And this is the key point. It is not only violent jihadists who resent representations of the prophet: such pictures trouble many millions of peaceful Muslims too. To print one now would be to take a stand against the former by offending the latter.

And that makes no sense. Not when our every move must now be aimed at confounding the killers’ wish to make this a holy war, pitting Muslims against everyone else. It is no such thing. Theirs is a dirty little war, a handful of wicked fanatics against the rest of us. And they must lose.