Gamal Abdul Nasser, President of Egypt 1956-70 in 1967 – his blood-curdling threats were crowd-pleasing bluffs.

NO OPERA by Richard Wagner could have been more dramatic. It looked as if it was directed by a genius.

It started low-key. A little piece of paper was thrust into the hand of Prime Minister Levi Eshkol as he was reviewing the Independence Day parade. It said that Egyptian troops were entering the Sinai peninsula.

In Israel, worry turned into fear, and fear into fright. Eshkol sounded weak. When he tried to raise public morale with a speech over the radio, he stumbled and seemed to stutter. People started talking about a Second Holocaust, about the destruction of Israel.

I was one of the very few who remained cheerful. At the height of public despair, I published an article in Haolam Hazeh, the news magazine I edited, under the headline “Nasser has Walked into a Trap”. Even my wife thought that was crazy.

MY GOOD cheer had a simple reason.

A few weeks before, I had given a talk in a Kibbutz on the Syrian border. As is customary, I was invited to have coffee afterwards with a select group of members. There I was told that “Dado” (General David Elazar), the commander of the Northern sector, had lectured there the week before, and then had coffee. Like me.

After swearing me to secrecy, they disclosed that Dado had told them – after swearing them to secrecy – that every evening, before going to bed, he prayed to God that Nasser would move his troops into the Sinai desert. “There we shall destroy them,” Dado had assured them.

Nasser did not want the war. He knew that his army was quite unprepared. He was bluffing, in order to please the Arab masses. He was egged on by the Soviet Union, whose leaders believed that Israel was about to attack their main client in the region, Syria, as part of a worldwide American plot.

(The Soviet ambassador, Dmitri Chuvakhin, invited me for a talk and disclosed the plot to me. If so, I said, why not ask your ambassador in Damascus to advise the Syrians to stop their border attacks on us, at least temporarily? The ambassador broke into laughter. “Do you really believe that anyone there listens to our ambassador?”)

Syria had allowed Yasser Arafat’s new Palestinian Liberation Movement (Fatah) to launch small and ineffectual guerilla actions from its border. They also spoke about an Algerian-style “popular liberation war”. In response, the Israeli Chief of Staff, Yitzhak Rabin, had threatened them with a war to change the regime in Damascus.

Abd-al-Nasser saw an easy opportunity to assert Egypt’s leadership of the Arab world by coming to the defense of Syria. He threatened to throw Israel into the sea. He announced that he had mined the Straits of Tiran, cutting Israel off from the Red Sea. (As it transpired later, he had not sown a single mine).

Three weeks passed, and the tension became unbearable. One day Menachem Begin saw me in the Knesset lobby, drew me into a side room and implored me: “Uri, we are political opponents, but in this emergency, we are all one. I know that your magazine has a lot of influence on the younger generation. Please use it to raise their morale!”

All the reserve units, the backbone of the army, were mobilized. There were hardly any men to be seen in the streets. Still Eshkol and his cabinet hesitated. They sent the chief of the Mossad to Washington to make sure that the US would support an Israeli action. Under growing public pressure, he formed a National Unity government and appointed Moshe Dayan as Minister of Defense.

WHEN THE bow was strained to near breaking point, the Israeli army was unleashed. The troops – mostly reserve soldiers who had been abruptly torn from their families and who had been waiting with growing impatience for three weeks – flew like an arrow.

I was attending the Knesset session on that first day of the war. In the middle of it, we were told to go to the bomb shelter, because the Jordanians in nearby East Jerusalem had begun to shell us. While we were there, a friend of mine, a high-ranking official, whispered in my ear: “It’s all over. We have destroyed the entire Egyptian Air Force.”

When I reached home that evening after driving through the blackout, my wife did not believe me. The radio had said nothing about the incredible achievement. Radio Cairo was telling its listeners that “Tel Aviv is burning”. I felt like a bridegroom at a funeral. Israeli military censorship forbade any mention of victories – the airwaves continued to be dominated by terrible forebodings.

Why? The Israeli government was convinced – quite rightly – that if the Arab countries and the Soviet Union realized that their side was nearing disaster, they would get the UN to stop the war at once. This indeed happened – but by that time our army was well on its way to Cairo and Damascus.

Against this background, when the victory was announced, it looked immense – so immense, indeed, that many believed in an act of God. Our army, which had been formed in the small State of Israel as it was at that time, conquered the entire Sinai peninsula, the Golan Heights, the West Bank, East Jerusalem and the Gaza Strip. From the “Second Holocaust” to miraculous deliverance, in just six days.

SO, WAS it a “defensive war” or an “act of naked aggression”? In the national consciousness, it was and remains a purely defensive war, started by “the Arabs”. Objectively speaking, it was our side which attacked, though under utmost provocation. Years later, when I said so in passing, a leading Israeli journalist was so upset that he stopped talking with me. 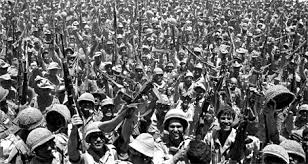 Be that as it may, the Israeli public reaction was stupendous. The entire country was in delirium. Masses of victory-albums, victory-songs, victory-this and victory-that amounted to national hysteria. Hubris knew no bounds. I cannot claim that I was entirely untouched by it.

Ariel Sharon boasted that the Israel army could reach Tripoli (in Libya) in six days. A movement for a Greater Israel came into being, with many of Israel’s most renowned personalities clamoring for membership. Soon the settlement enterprise was under way.

But, as in a Greek tragedy, hubris did not go unpunished. The gold turned to dust. The greatest victory in Israel’s history turned into its greatest curse. The occupied territories are like the shirt of Nessus, glued to our body to poison and torment us.

Just before the attack, Dayan had declared that Israel had absolutely no intention of conquering new territory, but aimed solely to defend itself. After the war, Foreign Minister Abba Eban declared that the pre-1967 armistice line was “the border of Auschwitz”.

Since generals “always fight the last war”, it was generally assumed that the world would not allow Israel to keep the territories it had just occupied. The “last war” was the Israeli-French-British collusion against Egypt in 1956. Then, US President Eisenhower and Soviet Premier Bulganin had compelled Israel to return the conquered territories up to the last inch.

The former border (or “demarcation line”) had an inward bulge near Latrun, halfway between Tel Aviv and Jerusalem, that cut the main road between the two cities. Immediately after the six days of fighting, Dayan hastened to evict the inhabitants of the three Arab villages there and to eradicate any sign that they ever existed. They have been replaced by a national park financed by the government of Canada and well-meaning Canadian citizens. The writer Amos Kenan was an eye-witness and, on my request, wrote a heart-rending report on the horrible eviction of the villagers, men, women, children and babies, who were made to march on foot under the scorching June sun all the way to Ramallah.

I tried to intervene, but it was too late. I did succeed, however, in halting the demolition of the town of Qalqilya near the border. When I appealed to several cabinet ministers, including Begin, the demolition was stopped. A neighborhood that had already been demolished was rebuilt and its inhabitants were allowed to return. But more than a hundred thousand refugees, who had been living in a huge refugee camp near Jericho since 1948, were induced to flee across the Jordan.

Slowly, the Israeli government got used to the astonishing fact that there was no real pressure on Israel to withdraw from the occupied territories. In a long private conversation I had with Eshkol on the morrow of the war, I realized that he and his colleagues has no intention whatsoever of giving back anything unless compelled to do so. My suggestion to help the Palestinians set up their state was met by Eshkol with gentle irony.

Thus the historic opportunity was missed. It is said that when God wants to destroy somebody, he first makes them blind – as he smote the men of Sodom (Genesis 19:11).

The vast majority of today’s Israelis, anyone less than 60 years old, cannot even imagine an Israel without the occupied territories.

On the 46th anniversary of that great drama, we can only wish that it had never happened, that it was all a bad dream.