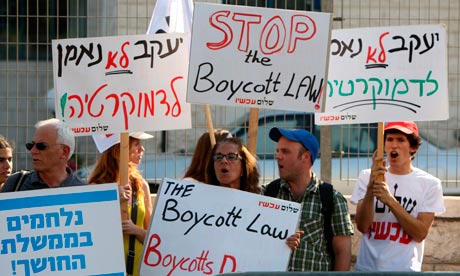 Israelis demonstrate against the boycott bill in Jerusalem. Photo by Ahmad Gharabli/AFP/Getty Images

Many Jewish-Israelis see local human rights groups as traitors, but a boycott will only make things worse. A response to Ron, Crow and Golden, Jessie Montell, Ian Lustick, and Lori Allen.

In many parts of the world, ordinary people view universal human rights as a “good thing,” something to support and enforce. Many Jewish Israelis will likely say the same, but only for people living elsewhere; Tibet, perhaps, or even Syria. When it comes to the Palestinians, I doubt many Israelis would feel the same way.

As an Israeli citizen, academic, and human rights activist, I have to agree with those assessments. 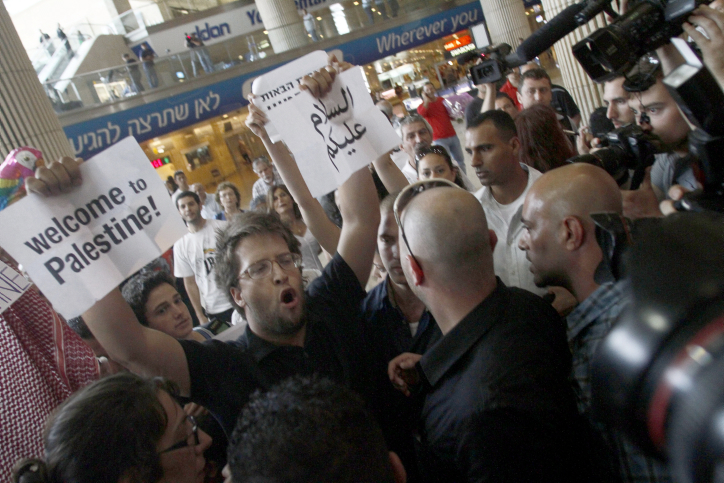 Israeli activists make a stand at Ben Gurion airport for the Welcome to Palestine Flytilla, 2011. Photo by Flash90.

Ashutosh Varshney, a noted scholar of Indian politics, writes that civil societies are often implicated in communal and ethnic conflict. This is very true for Israel. For many years, there was little division between state and civil society in Israel. As a result, what passed for “civil society” in the country was as much a protagonist in the Israeli/Palestinian conflict as the Israeli state itself, and the state’s security forces. As scholar Uri Ben Eliezer shows, this is part and parcel of a long-standing tradition, in which the Israeli state enveloped and engulfed civil society, leaving little distinction between rulers and the ruled. Scarred by the horrors of the Holocaust, Israeli state and society were joined at the hip, welded together in an all-encompassing Zionist consensus.

It is true, as Montell says, that a new and more autonomous civil society has begun to emerge in Israel, one whose core logics are post-Zionist, cosmopolitan, and universalist. This new civil society is challenging Zionist communitarianism, calling instead for the inclusion of marginalised groups, such as African foreign workers and refugees living in south Tel Aviv.

Many Jewish Israelis do not welcome this new cosmopolitanism, however, and the Holocaust’s bitter legacy gives the communitarians more influence than the Jewish universalists. As a result, many Jewish Israelis view today’s post-Zionist human rights groups as national traitors, rather than as universalist heroes.

Consider, for example, the campaign against the New Israel Fund (NIF), a Jewish foundation that supports many of Israel’s most cosmopolitan civil society organizations, including Jewish groups fighting against religious coercion, and those supporting women’s liberation and empowerment of the poor.

As a result of this campaign, you have only to mention that “funding was provided by the NIF” for most Jewish Israelis to reject the project or organization outright. This is in part because the NIF also supports groups such as the Mossawa Center or Adalah, both of which promote the rights of Israel’s Palestinian Arab citizens. Those groups, along with the NIF, are viewed as enemies, traitors, and anti-Semites.

Ian Lustick argues in openGlobalRights that Israel, like South Africa, is heading toward pariah status. I agree. I do not believe, however, that the international boycott campaign will help convince many Jewish Israelis that Israeli policies, rather than anti-Semitism, lies at the root of their isolation. Instead, a boycott is more likely to convince them even further that the world is against Israel for no good reason, thanks in part to the traitorous behavior of Jewish Israeli human rights organizations serving as Western or anti-Semitic spies.

The international boycott campaign, in other words, plays straight into the hands of the Jewish-Israeli right wing. You cannot threaten a sieged mentality society with a boycott.