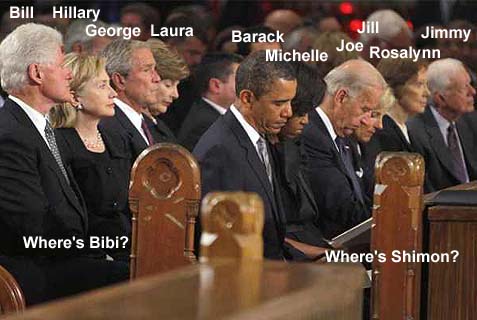 Photo of Nelson Mandela’s funeral captioned by the Jewish Press (a right-wing agency).

By Matthew Norman, The Independent
December 10, 2013

Given the inspiring example of the man whose memorial service was attended by almost every leader or deputy leader of the world’s more significant powers, it is surely time for Jerry Dammers and the rest of The Special AKA to bury the hatchet. The author of “Free Nelson Mandela” and his bandmates fell out many years ago. But if they would undergo a peace and reconciliation process and reform, you have to imagine that Coventry’s finest would wish to rework Dammers’s gloriously upbeat protest song in the cause of arguably the most glaring, and certainly the most heart-rending, Soccer City absentee of yesterday.

Well, something must be done to liberate Benjamin Netanyahu – who cancelled his trip to South Africa on cost-cutting grounds – from the poverty that imprisoned him at home. The profits from a worldwide hit record would, at the very least, be a useful first step.

Regrettably, if predictably, some will dispute the Israeli prime minister’s explanation, divining other reasons for the 11th-hour refusal to attend. They think that $2m – the alleged price of chartering an El Al jet to Johannesburg and deploying a military plane for his security detail – is not, in these unique circumstances, a huge outlay. In real terms, in fact, factoring in any moral obligation to pay respects to Mandela on behalf of the Israeli people, they calculate that it equates to a little less than thruppence ha’penny.

Such sceptics would further point out that this devotion to penny-pinching represents a startling change of heart. Bibi had become well known for his taste for Cuban cigars – who knows, he might have snaffled a box of Cohibas in the VIP zone from Raul Castro – and venerable French cognacs. Long, long ago, in the April of 2013, under a less punishing financial climate in which he felt entitled to go to such events, he authorised the diversion of £127,000 from public funds to equip a plane with a bespoke sleeping cabin for the marathon five-hour flight to London for Margaret Thatcher’s funeral. Meanwhile, he has lately dipped into the public coffers to find $1,700 for scented candles, $22,000 for a water bill at his holiday home, and $3,000 for ice cream at his favourite gelateria.

Taking such expenditure into account, and unconvinced by his conversion on the runway to Jo’burg, the cynics and sneerers suspect that Bibi, to borrow from Mrs Thatcher’s Lincolnshire dialect, was frit. That he was scared of being booed in the stadium by those who remember that Israel was the apartheid regime’s last and doughtiest friend in the developed world, and by those who detect similarities, however vague, between the maltreatment of black South Africans and the subjugation of Palestinians in the occupied territories. Others may wonder if he took fright at the prospect of bumping into Iran’s new president, Hassan Rouhani, of whose bona fides on the nuclear issue he remains mildly unpersuaded.

Are they so deaf that they cannot hear, in his insistence that the only thing keeping him away was the cost, the authentic ring of plain truth? He is not so blind, after all, that he cannot see the metaphorical message his self-imposed isolation from his leadership brethren sends to the world about Israel’s growing isolationism and quickening journey towards pariah statehood under his muscular stewardship. And even if he is, what brand of maniac would waste possibly the hottest ticket in human history if a feasible way might have been found to raise the cash?

I like to think that he did not waste it entirely, and sold it on e-Bay (it would have raised enough to keep him in vanilla scoops and Monte Cristos for a while). That, or he generously gave it away, perhaps to some lucky tobacconist, ice cream vendor or aircraft carpenter who played the Tommy Cooper role at the Royal Variety show, when he asked the Queen if she was going to the FA Cup final. She said that she had no such plans. “In that case, Ma’am,” said Cooper, “can I have your ticket?”

Anyway, spare a thought for the anti-FW de Klerk of Israel as he stoically endures his church (or synagogue) mouse existence at the head of the wealthiest and most powerful nation in the region. And now sing along as we anticipate the Dammers’s reworking of that protest classic, looking ahead to the day he completes his long walk to freedom from unflinching monetary shackles, and feels able once again to honour departed figures of planetary importance with his presence.

He’s so poor, you would not believe

He’s so broke that he could not leave The Clintons at the funeral

JERUSALEM — Fresh off a series of scandals over his high-flying lifestyle and expensive habits, Israel’s prime minister says he will skip Nelson Mandela’s funeral on Tuesday due to the high cost of the trip.

Benjamin Netanyahu’s decision stood in contrast to the mad rush by world leaders to attend the event, and seemed to underscore the embattled Israeli leader’s isolation on the world stage. Nearly 100 heads of state, along with tens of thousands of mourners, are expected at the memorial in a Soweto soccer stadium.

Netanyahu, who is known to enjoy puffing on expensive cigars and sipping cognac, has come under criticism several times in recent months for his free-spending habits.

Last week, official records obtained by a civil liberties group showed that Netanyahu had spent $1,700 in government funds on scented candles and $22,000 on the water bill at his vacation home. The disclosures set off a national uproar and gave new fodder to critics and comedians.

Earlier this year, a TV station reported that Netanyahu spent $127,000 in public funds for a special sleeping cabin on a five-hour flight to London to attend Margaret Thatcher’s funeral. Netanyahu was forced to stop buying ice cream from his favorite Jerusalem parlor after an Israeli newspaper discovered his office was spending $3,000 a year for the treat.

An Israeli official said Netanyahu had intended on attending the Mandela funeral, and Israel’s embassy in South Africa had even begun making preparations. The official said the prime minister changed his mind after learning about the high cost, as well as special “security challenges.” The official spoke on condition of anonymity because he was not authorized to discuss the matter with the media.

The trip was estimated to cost roughly $2 million, including a charter flight for Netanyahu’s entourage and a separate Hercules transport aircraft to carry security equipment. Later Monday, Israel said parliament Speaker Yuli Edelstein would lead a small delegation of lawmakers to the funeral.

“My Israel, which so craves and demands legitimacy and recognition as a full partner in the community of nations, does not consider a man like Nelson Mandela, or a nation like South Africa, or the sentiment of an entire world, worth the price of a plane flight,” he wrote.

But the deeper issue may have been Netanyahu’s shaky reputation on the world stage, particularly among the dozens of leaders from the developing world who will be in attendance, including Palestinian President Mahmoud Abbas. Netanyahu is widely viewed as a hard-liner whose support for Jewish settlements in occupied lands is not conducive to peace.

While Netanyahu venerated Mandela last week as one of “the greatest figures of our time,” Israel’s relations with post-apartheid South Africa have been strained.

Many in South Africa compare Israel’s occupation of the West Bank to apartheid-era South Africa, a charge Israel rejects, and Mandela famously said that “our freedom is incomplete without the freedom of the Palestinians.”

Last year, South Africa’s government decided that goods imported from Israeli West Bank settlements cannot not be labeled “product of Israel.” In 2011, the University of Johannesburg became the world’s first to impose an academic boycott on Israel.

Alon Liel, a former Israeli ambassador to South Africa, said Netanyahu had made the right decision not to go to the funeral service.

“I think he should have said no from the beginning. Knowing Mandela and the circles around him … they dislike Netanyahu and his policies,” Liel said. “I don’t think South Africa would feel comfortable with his presence.”

He said a better choice would have been President Shimon Peres, who like Mandela is a Nobel peace laureate and who is well respected internationally for his tireless promotion of peace, lofty discourse and sheer longevity on the world stage. Peres’ office said the 90-year-old president wanted to go, but had been ordered to stay home by his doctors because he is recovering from the flu.

90 heads of state were in attendance — but not from Israel

Some funerals are diplomatic events. Mrs Thatcher, Yitzhak Rabin, Ronald Reagan…. These are events which feature on the international diplomatic calendar, even though the dates are not known in advance (unless you believe the conspiracy theorists). Literally dozens of world leaders attend, and there are opportunities for favorable international PR, as well as behind the scene deals and covert discussions.

Much like a G20 summit meeting, the World Economic Forum Meeting in Davos, or a UN General Session in New York. Nelson Mandela’s funeral today was such an occasion. 90 heads of state were in attendance from every country imaginable. All these people, by definition, have packed schedules of important commitments, and yet they were able to clear their diaries, arrange logistics, and turn up in Jo’berg for the funeral spectacular.

Not Israel. President Peres reportedly had a bout of the flu – which at 90 is nothing to be sneezed at; and Prime Minister Netanyahu had run out of his international funeral budget. There were apparently additional concerns about security – although other world leaders, who probably value their own lives, seemed to deal with that one.

We all know that Mandela was pro-Palestinian – although that really was not the reason the whole world admired his statesmanship and revolutionary achievements in South Africa. In a moment of fumbling – a motley crew of MKs was assembled and dispatched from Jerusalem to South Africa, consisting of Yuli Edelstein (Speaker), Pnina Tamnu-Shata (Yesh Atid), Dov Lipman (Yesh Atid), Nitzan Horowitz (Meretz), Gila Gamliel (Likud Beytenu) and Hilik Bar (Labor). Its hard to work out what diplomatic assets could come out of what looked like, to the untrained eye, a national snub. I guess if the concern really was security, then the clutch of cheerful looking MKs on a rare international jaunt, must have met the Israeli Foreign Ministry’s criteria of being, in a worst case scenario, dispensable.