When the High Court ruled in September 2014 that the Holot holding centre for African refugees must be closed it ‘struck down a measure passed by Israel’s parliament in December’ 2013. It thus appeared to be the staunch defender of human rights against the racism of politicians. No such luck. [The protesters’ message reads: We are new, came through Sinai and still under prison]

The real reason Netanyahu has the High Court in his crosshairs

The government’s plan to curb the High Court’s authority distracts from the fact that on most of Israel’s discriminatory and anti-democratic laws and policies, the two institutions see eye to eye.

Israel’s Supreme Court sits as the High Court of Justice, April 1, 2014. (Photo by Oren Ziv/Activestills)
In recent weeks, the Israeli media has reported on Prime Minister Netanyahu’s plan to propose new legislation that would grant the government more authority over the selection of High Court justices, as well as limit the court’s judicial review power. The plan has been blocked by centre-right Kulanu leader Moshe Kahlon as a condition for joining the new coalition, but Likud and its far-right partners have not ruled out re-introducing it in the future. Chief Justice Miriam Naor also denounced the plan at a conference last week, saying that the Court must retain its position as “the last barrier against harm to human dignity” in Israel.

The dispute over the proposed legislation has largely been framed as the latest episode in a long-standing confrontation between right-wing politicians and the judiciary over the extent of the latter’s integrity and independence. This framing is only partly true: the government and the High Court have indeed clashed on many important issues in recent years, including the internment of African asylum seekers at the Holot detention centre, and some incidents of Jewish outposts built on private Palestinian land in the occupied West Bank.

However, this narrative distracts from the fact that the two institutions actually agree on most of Israel’s discriminatory and anti-democratic laws and policies, in contradiction to the Court’s self-proclaimed role as the vanguard of dignity and liberty in Israel. The cases in which clashes do occur almost never relate to “core” questions involving the Jewish character of the state or the main structures of the occupation. On those core questions, however, the Court has not only allowed the government to pursue its agendas, but has also increasingly endorsed the hostile intentions behind them.

Justice Hanan Melcer
He ruled that calls for boycott constitute ‘political terror’. When Haneen Zoabi appealed against the Knesset decision to suspend her, he ruled that “Of all her statements, you must address her call ‘to place a siege on the state of Israel instead of negotiating with it’”, ie the MKs were right to see her as a traitor.

The recent approval of the Anti-Boycott Law is one example of this. In the ruling, several justices actively adopted the discourse of Israel’s politicians that views the civil right to boycott, including against settlements, as a threat to the state. Justice Hanan Melcer wrote that boycotts could amount to “political terror;” Justice Yitzhak Amit remarked that BDS could stand for “Bigoted, Dishonest, Shameful;” and Justice Elyakim Rubinstein wrote, “There is nothing wrong in anchoring laws passed by the Knesset in the struggle against those who wish to annihilate us.”

Another example is the Citizenship and Entry into Israel Law, enacted in 2003, which bans Palestinian citizens of Israel from bringing spouses and children born in the Occupied Territories to live with them in Israel. In a 2012 ruling rejecting a petition against it, then-Chief Justice Asher Grunis admitted that the law was indeed discriminatory, but wrote that “Human rights should not be a prescription for national suicide.” The ruling essentially legitimized the racist belief that Palestinians are not entitled to family unification because their non-Jewish identity, regardless of Israeli citizenship, is enough to consider them a security threat – if not a “demographic” threat. 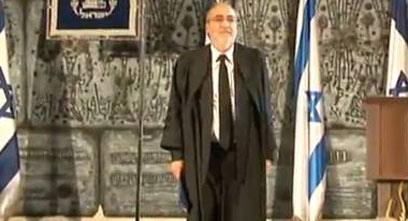 In other cases like the Nakba Law and the Admissions Committees Law, the High Court applied a “non-interventionist” policy by using procedural excuses to dismiss petitions, claiming that they were premature or “not ripe” for review. This policy, however, is an act of complicity: When the Court refuses to stop laws that clearly infringe on freedom of expression and permit racial segregation – which were the clear intentions of the laws’ authors – then the justices are just as responsible for the laws as the politicians who enacted them.

In view of these and other examples (especially from the Occupied Territories), it is almost bizarre to see Netanyahu attacking the High Court when it has in fact been a key enabler of most of his governments’ policies. This takes us to the real source of their dispute, which is less about human rights as it is about the power to determine Israel’s “core” questions. The right wing, which today dominates Israel’s political sphere, wants to change the historical status quo by explicitly prioritizing the state’s Jewish character in law and officially recognizing the occupation as a permanent feature of the state. The High Court, though willing to facilitate these goals in different ways, is still worried that the politicians’ overt approach will jeopardize Israel’s image as a democracy in the eyes of both its citizens and the international community. Because of this gridlock over methods, Netanyahu has decided to bring the judiciary under his government’s control, revealing the depth of the political leadership’s intolerance for dissent even against those who assist it. Kahlon thus may have halted the proposed bills for now, but he will not stop the right-wing’s motives to pursue them.

This looming conflict between the government and the High Court will be important to watch in the coming years. But from the perspective of human rights in Israel, the discriminatory goals that unite the two institutions are more significant than the issues that divide them. Justice Naor is right in saying that the Court should be the barrier that protects human rights in the country, but its recent rulings suggest that this barrier will not protect Palestinian citizens or the Israeli left. On that point, it seems, the government and the Court have more in common than they would like to admit.

Amjad Iraqi is a Projects & International Advocacy Coordinator at Adalah – The Legal Centre for Arab Minority Rights in Israel.