Jews Against US Attacking Syria, Progressives For It?

It is time for American Jews to take a stand against AIPAC, to put America first, to put peace first.

This is the time of the Jewish High Holy Days– Rosh Hashanah, Yom Kippur, when many Jews go to synagogue, for some, the only time of year they go.

AIPAC, the American lobbying arm for Israel is going all out in its effort to get congress to support the attacks on Syria Obama has asked approval for.

AIPAC is incredibly powerful and influential in congress. It could tip the scales so members of congress vote for the interests of Israel before the interests of their constituents. It’s happened before.

To put it plainly, if congress backs Obama, it will probably be because of AIPAC and its advocacy for Israel. The Israel firsters in congress– House Majority Leader Eric Cantor and Minority Whip Stenny Hoyer– will herd their people to get behind a vote that will send a message to Iran. That’s right. It won’t be about poison gas in Syria. As MJ Rosenberg says,

to AIPAC, its not about Syria or Syrian victims of chemical warfare. No, to AIPAC, this is about Iran. If it can’t put over a rather minor effort against Syria, how would it sell America (including Congress) on a major war with Iran? Answer: it can’t. 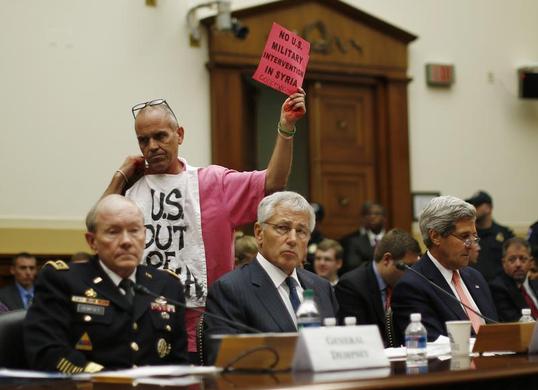 A protester holds up a banner as General Martin Dempsey, chairman of the Joint Chiefs of Staff, Secretary of Defense Chuck Hagel and Secretary of State John Kerry testify at a U.S. House Foreign Affairs Committee hearing on Syria on Capitol Hill, September 4, 2013. Photo by Jason Reed/ Reuters

If it loses this vote, the 800 pound gorilla will be staggering — alive but more like a big monkey. On the other hand, it will be able to rake in millions from credulous donors by warning that Iranian bombs are practically en route to Tel Aviv, that another Holocaust looms and anti-Semites are everywhere.
Maybe, one friend of mind speculated, Obama has sent this to congress so he doesn’t have to make the decision. Or, maybe, I’m guessing, he’s sent it to congress so he doesn’t have to stand up to AIPAC, and he’s forcing house members to stand up to AIPAC.

Billionaire Zionist Sheldon Adelson spent over $90 million in the 2012 election cycle, with support for Israel one of his biggest issues. I’m sure he’s calling the candidates he supported.

But congress is not beholding to the same interests they used to. With the new teaparty Republicans, old allegiances are no longer holding. The same teaparty house members who are repudiating corporate interests are also opposing the attack on Syria.

But AIPAC is very powerful. Apparently, even if its power is ebbing, a very good thing, it is more powerful among Democrats (though, one can’t be sure if they are backing AIPAC or Obama.)

It may be that the supposedly liberal Democrats in congress are the worst betrayers of the progressives and anti-war members of the Democratic party. Democratic Senators Barbara Boxer, Ben Cardin, Jeanne Shaheen, Christopher Coons, Richard Durbin and Tim Kaine voted to support Obama’s request for approval for an attack, in the Senate Foreign Relations Committee. To their courageous credit Tom Udall and Chris Murphy voted no.

And a huffingtonpost tally suggests that a guy who I thought was a stalwart progressive Democrat, Keith Ellison is leaning yes on Syria, as well as Elijah Cummings.

Here’s a list from the huffpo article on those democrats either going yes or leaning yes.

I’ll wrap up this piece with these words. I am a Jew and I totally oppose the attack on Syria. I also totally oppose AIPAC. I support Israel’s right to exist, but oppose many of its policies, just as I have opposed policies of the recent presidents of the United States.

It is time for American Jews to take a stand against AIPAC, to put America first, to put peace first.

What to do? Urge your Senators and House member and whatever publics you can reach, to vigorously oppose any resolution authorizing military force against Syria, and instead to put forward nonviolent, nonlethal alternatuve ways of intervening.
Try to start a viral message:

Remember: On Rosh Hashanah we pleaded with God — which means also with ourselves — to move from the throne of Punitive Justice to the throne of Compassionate Repair.

That the American Israel Public Affairs Committee (AIPAC) is pushing Congress toward attacking Syria is no secret. As usual, however, AIPAC is out of touch with Jewish Americans.

There is a good reason for which the proper diction for AIPAC is “an Israel lobby” rather than “a Jewish lobby.” AIPAC doesn’t represent the views of most American Jews, who are substantially to its left on politics. In polling, between a quarter and over a third of American Jews say that they don’t feel a strong connection to Israel or that supporting it isn’t an important part of their Jewishness, and the percentage is probably much higher in the younger generation. In a 2012 opinion poll, only a little over 4 percent of American Jews said that US-Israeli relations were the first or second most important issues to them in the presidential election, and only 6% said it was the third most important issue.

AIPAC is in sync with conservative rabbis and the few Republican Jews in Congress, but they are hardly the rank and file.

Prominent Jewish Americans have come out forcefully against military action toward Syria. Among them is Alan Grayson (D-FL), who represents Orlando. Grayson is originally from the Bronx and put himself through Harvard working as a janitor. He genuinely cares about working people and is in close touch with his constituents in Orlando, who tell him they want nothing to do with a Syria military strike.

Senator Bernie Sanders (I-VT) says he is keeping an open mind but has the most serious reservations about the president’s plan.

Rabbi Michael Lerner has put forward some alternatives to military action against Syria. Lerner is politically far closer to the views of most Jewish Americans than the conservative rabbis supporting the attack.

That the issue isn’t a black and white one for Jewish representatives of Congress is obvious from how many are undecided and agonizing on the authorization for use of military force (Alan Lowenthal, Adam Schiff, Henry Waxman and Susan Davis of California, for example). Waxman wrote Obama on August 29 pleading with him, “don’t draw us into an unnecessary war.” Most of them are Democrats and their party leader is asking them for support, and they may cave. But it should be clear that it is Obama and Kerry strong-arming them and not the other way around.

I couldn’t find a poll of American Jews on the issue of a US attack on Syria, but I’d be surprised if it isn’t actually less popular among them than among the non-Jewish population.

By the way, American Muslims are also divided. Keith Ellison (D-MN) is supporting the strike on Syria. Andre Carson (D-IN) is undecided and wants more proof.