JVP sounds the alarm; two of the hostile articles follow. 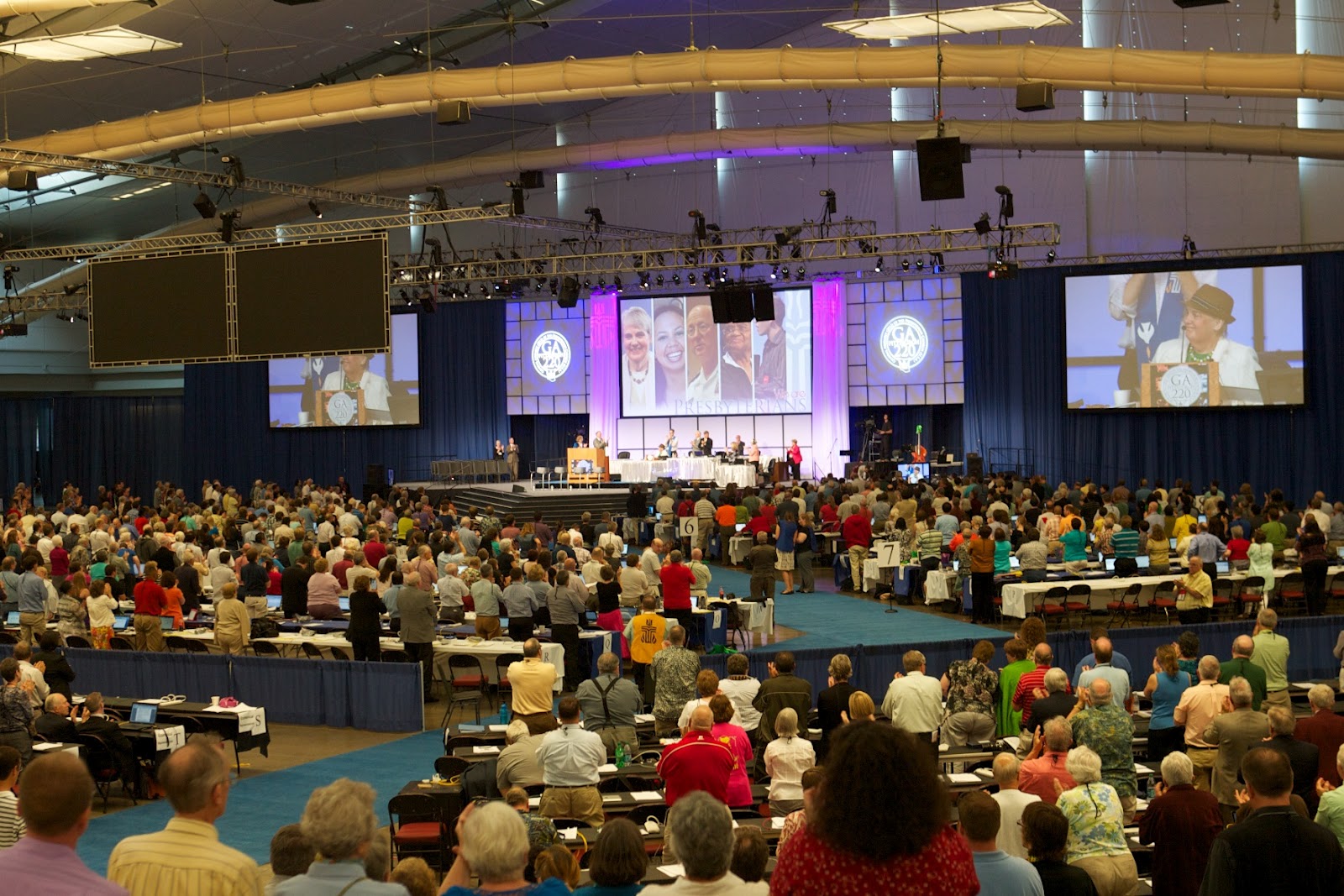 The Israel Lobby has launched an all-out smear campaign against nonviolent direct action. We at JVP] need your help to overcome their slander.

Next week, the Presbyterian Church is going to take up that exact question: should they divest from Caterpillar, Hewlett-Packard, and Motorola Solutions – three companies that all profit from the Israeli occupation?

So please: show Presbyterian activists ready for real change you’re with them!

We all know the Israel Lobby has a way of making people of conscience feel real lonely standing up.

And the Presbyterian Church is coming under intense pressure from the Lobby to say “no” to divestment. Supporters of this non-violent, time-honored tactic are being labeled “Retrograde.” “Demonizing.” “Offensive.” And, of course, “anti-semitic.”

But think about it for a moment – what are they’re really saying beneath those buzzwords? To pro-actively invest in occupation.

And the most helpful thing we can do – our obligation, even – is to show them who really supports divestment. To show that we’re Jewish, Muslim, atheist, young, old, wealthy, working class, men, women, activists, educators, students and more.

And that we know investing in the daily human suffering of occupation is wrong.

Standing up for justice can be lonely work. Let’s make sure our allies in the Presbyterian Church know they aren’t alone.

With declining ranks, does a Presbyterian boycott of Israel even matter?

Leaders of Presbyterian Church USA (PCUSA) are set to decide on whether or not to support an anti-Israel Boycott, Divestment and Sanctions (BDS) resolution at their upcoming biennial general assembly in Detroit from June 14-20. But as one of America’s smallest Christian denominations, and with a sharply declining membership base, do their efforts even matter?

The latest effort represents the third Presbyterian biennial in a row that a pro-BDS resolution will appear at the denomination’s general assembly, as BDS supporters who make up part of PCUSA’s Israel/Palestine Mission Network (IPMN) have gained momentum following a narrow two-vote loss (333-331) for a boycott measure at the 2012 biennial.

“The anti-Israel activists narrowed their margin of defeat in the last assembly, so they could pull it off this time,” Dexter Van Zile, Christian media analyst for the Committee for Accuracy in Middle East Reporting in America (CAMERA), told JNS.org.

Similar to past BDS resolutions, the current one calls on PCUSA to label Israel as an “apartheid” nation, while calling for divestment from major companies such as Motorola, Caterpillar, and Hewlett-Packard who “participate in the Israeli occupation of Palestine.”

“Over the last decade, numerous divestment and boycott resolutions uniquely and solely aimed at Israel have been brought by a small minority of anti-Israel activists in the Presbyterian Church. They in turn are partnered with the global BDS campaign to demonize and delegitimize Israel,” Yitzhak Santis, chief programs officer and “BDS in the Pews” project director at the watchdog group NGO Monitor, told JNS.org.

The IPMN’s efforts inside the church culminated in its January release of a virulently anti-Israel document, “Zionism Unsettled: A Congregational Study Guide.” Pro-Israel groups blasted the guide, with the American Jewish Committee calling it “a devastating distortion of Jewish and Israeli history, aimed at nothing less than eradicating the state of Israel.”

“BDS leaders have specifically targeted the churches for co-optation; they hope to capture the churches’ moral voice to act as a stalking horse for their cause, which is to dismantle the state of Israel,” he said.

Yet there have been efforts by some Presbyterian leaders to gain a more balanced education on the Arab-Israeli conflict. In February, a delegation of more than a dozen Presbyterian lay leaders visited SodaStream’s factory in the Israeli West Bank city of Ma’ale Adumim. The factory’s location has made it the target of BDS attacks, but it is also touted as a unique model of Israeli-Palestinian cooperation since it employs nearly 500 Palestinian workers alongside Israelis.

“[The BDS resolution] might pass this time despite heroic efforts on the part of responsible adults within the denomination,” Van Zile said.

Despite its generation of headlines, it is debatable what type of influence an anti-Israel divestment resolution passed by the PCUSA would have.

The latest figures released by PCUSA in 2012 indicate that membership has dramatically declined over the last half decade, with the loss of nearly 465,000 members between 2006 and 2012, including 103,000 between 2011 and 2012. These declines have coincided with a growing push by anti-Israel members within PCUSA to have the church divest from Israel.

At the same time, according to the Pew Research Center, PCUSA is one of America’s smallest churches, constituting only 2 percent of total Protestants and 1.1 percent of the American population as a whole. When compared to largely pro-Israel Evangelical Christians, who constitute over a quarter of all Americans, making it the largest single denomination in America, it would appear their influence is limited.

“When you don’t have the moral clarity to denounce an anti-Semitic diatribe such as ‘Zionism Unsettled,’ then something is clearly wrong, David Brog, executive director of Christians United for Israel (CUFI), told JNS.org.

Brog sees a link between the growing radical anti-Israel agenda within PCUSA and a steady decline in the church’s membership over the last decade, leading some PCUSA members to cross denominational boundaries and seek support from pro-Israel evangelical Christian groups like CUFI.

“The leadership of the PCUSA is out of touch with the membership in the pews,” he said. “This is certainly one reason why the number of members in those pews has been steadily declining. And this is also one reason why the number of Presbyterians seeking to work with CUFI has been on the rise. People will gravitate towards those who are best representing their morality both within church walls and beyond.”

“It might spark another round of resolutions in other mainline churches. I’ve seen, for example, a group of activists in the United Church of Christ who have modeled their organization after the Israel/Palestine Mission Network in the PCUSA. This group might think they can win in the UCC`s General Synod next year,” Van he said.

“The PCUSA, though small in numbers, is being watched by a number of other mainline churches,” he said. “Passage of divestment could signal to these other churches, which have refrained from passing divestment, to move forward on that front.”

At the same time, as the Middle East falls into more chaos and instability by the day—with news of Islamic jihadists conquering cities in Iraq and Syria, as well as Iran’s nuclear ambitions—observers may realize that Israel is not the source of the region’s woes.

“They [BDS supporters] might face an obstacle,” Van Zile said. “The region is blowing up. Syria is a disaster. Iraq is getting much worse. At a certain point people will have to admit that Israel is not the problem.”

Why Proposed Presbyterian Divestment From Israel Is Wrong

I am also the co-author of divestment laws in two U.S. states. I believe in divestment, where appropriate. Threatening to pull our money out of corporations doing business in certain parts of the world can be a good idea, if done in the right place and for the right reasons.

Divestment was, at one time, a good idea for the province of Northern Ireland, where virulent anti-Catholic discrimination made Catholics two and a half-times more likely than Protestants to be out of a job. That’s why I co-authored and successfully lobbied for the enactment of divestment legislation incorporating the MacBride Principles, nine fair employment principles, in Connecticut in 1984 and New Hampshire in 1989. Companies doing business in Northern Ireland which failed to adhere to the principles could face funds being pulled.

Divestment was a good idea for apartheid South Africa, where a white minority government segregated and discriminated against black inhabitants of the country. The Sullivan Principles, a corporate code of conduct upon which the MacBride Principles were modeled, provided the same economic leverage for companies doing business in South Africa.

Divestment is a terrible idea for Israel. That’s why, at its General Assembly in Detroit this June 14-21, Presbyterians should vote down any measure which contemplates divestment from companies doing business in Israel.

The laws I helped get passed into law in two U.S. states were designed not just to address the problem of anti-Catholic discrimination; they were meant to attack the very structure of the province within which that discrimination flourished. The entity “Northern Ireland” had been maintained over decades by so-called “emergency” laws which, among other things, had allowed some of its citizens to be detained without charge or right to counsel and stripped of the right to a jury trial for certain charges. Inequality was built into its structure: in voting, employment, housing.

The MacBride Principles campaign of the 1980s helped lead to a dramatic shift: a peace process which began in the 1990s and culminated in the signing of peace agreements on Good Friday, 1998. Those agreements, one among political parties in Northern Ireland and the other between the British and Irish governments, contained sweeping provisions which ended direct British rule of Northern Ireland and changed Northern Ireland’s system of government, creating new governmental institutions, allowing greater political participation and guaranteeing certain civil rights. Today, Martin McGuinness, an Irish Republican who once spent time in a British prison, is the Deputy First Minister of Northern Ireland.

The Sullivan Principles for South Africa had a similar dual purpose. They weren’t meant just to remedy the unequal position of blacks in the country; they were designed to help do away with the apartheid government itself. The divestment campaign worked: the apartheid government fell in 1994. Nelson Mandela was inaugurated South Africa’s President on May 10 of that year.

Seen in that context, using the same blunt tool against the State of Israel makes no sense. Do we really want to subvert the nation of Israel?

The modern State of Israel came into being shortly after the end of WWII, when Hitler’s mass murder of six million Jews left the world aghast. One of the pastors of my church, the late John Boyle, was a 19-year-old sergeant in the U.S. Army when his unit helped liberate the Nazi concentration camp at Dachau. What John saw there led him to become a Presbyterian minister; he vowed to be on the side of whatever was against the forces that had led to the carnage he had witnessed. He never forgot it. We should not either.

Many Presbyterians of good will are rightly concerned with the plight of Palestinians. I am one of them. But divestment is not the way to help.

There is another way: engage. Reach out. Travel, listen, learn, meet, speak, write, lobby, donate, invest, pray, press for change. We can, with God’s help, change the world, without wielding the weapon of divestment in a place it does not belong.

BDS in the pews: a project of NGO Monitor