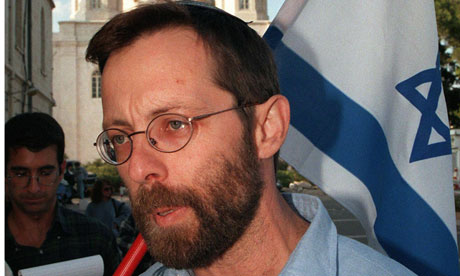 Moshe Feiglin, a religious,far-right, hardline settler from Karnei Shomron was elected to the Knesset in 2013. He has advocated the ‘elimination’ of armed Palestinians, the reclamation of Gaza by Israel and resettlement of Palestinians in concentration camps. Israelis chose him as the 43th most popular member of Likud. Photo by Daoud Mizrahi/AFP/Getty Images

What Gaza Has Revealed

Throughout the 1950s and 1960s and continuing through the present, the central issue in the study of European history was the rise of Nazism. Not the documenting of the facts of the long descent to the Holocaust, though this was essential to the enterprise. But the trying to understand how a country that was in many ways the most advanced in Europe could descend so far so fast. Scholars examined German patterns of leadership and conformity, searched in the varied forms of cultural nationalism for the ideological and literary precursors of Nazism, analyzed the “wholeness hunger” that purportedly led young Germans to do everything from embracing nature to embracing a fuhrer, and studied the moral cowardice exhibited by German civic elites in nearly every profession.

In the memoirs of many German Jews who escaped Hitlerism when they still could, this descent was wrapped in enigma: Hitler and Nazis were so unexpected, so contrary to their internalized sense of Germany as a nation of law and science, and a place where there was considerable intermarriage between Jews and Christians, where Jews—as much or even more so than any other country in Europe, felt secure, self-confident, and patriotic. In countless tragic cases, this belief that Nazism was at odds with the “inner, real” Germany led people to wait too long and not emigrate when there was still opportunity to do so. (Of course, that the number of countries welcoming Jewish refugees in the 1930s was limited, in considerable part due to anti-Semitism.) What stands out was the time lag between a new reality—Germany becoming a murderous dictatorship, and the perception of that reality.

Of course one needs to avoid crude polemical comparisons of Nazi Germany, particularly Nazism during the Holocaust era, to anywhere, and such comparisons to Israel are often meant to be gratuitously offensive. Israel is not Nazi Germany.

Nevertheless, with its most recent Gaza war the country has turned a page, exposing Americans and the world to a new and far more fascist Israel than was evident in past decades. One could compile a lengthy list of indicators, few of which have been much explored in the American press but which are fairly widely reported in Israel and on the Internet.

The Israeli peace camp has nearly disappeared—gone for instance are the large mass demonstrations of the 1980s that pushed for an end to the Likud’s forays into Lebanon. Of equal significance is that it no longer safe in Israel to oppose government policy by peaceful demonstration. Several years ago Natan Sharansky, the former Soviet dissident who became an Israeli politician and celebrated neoconservative author posited what he called “the town square test”:

If a person cannot walk into the middle of the town square and express his or her views without fear of arrest, imprisonment, or physical harm, then that person is living in a fear society, not a free society. We cannot rest until every person living in a “fear society” has finally won their freedom.

If one credits the numerous first-person reports from Israeli peace demonstrators, to protest Israeli bombardment of Gaza now is to risk attack by right-wing thugs, while the police look on or sometimes help the pro-government attackers. Meanwhile, Israeli pro-government politicians look for new ways to punish dissenters, either by rendering human right organizations unable to function or by pressuring employers to fire dissenters from their jobs—tactics now described as “white fascism”. Israel hasn’t traversed the entire route of becoming a Sharansky “fear society,” but it is on that trajectory.

And then listen to Israel’s politicians. There is Ayelet Shaked, whose open call for genocide against Palestinians provoked one British-Israeli citizen to contemplate burning her Israeli passport. Shaked was giving political voice to the Israeli mobs that run around Jerusalem shouting “Death to the Arabs” and looking for Palestinians to beat up, though she is after all only one member of Israel’s Parliament. But what is one to make of Moshe Feiglin, not a marginal Israeli figure but deputy speaker of the Knesset, a top player in Israel’s ruling Likud Party? He recently called for Gazans to resettled in concentration camps, and all of Hamas and its supporters to be “annihilated.” All societies have their hate groups and extremists, but nowhere in the democratic world are they nearer to the center of power than Israel. In the 1980s Meir Kahane had a small following in Israel, but his pro-ethnic cleansing party was made illegal. Now Kahanists are in the center of the country’s ruling ideology.

The Israeli turn towards fascism was explored in Max Blumenthal’s superbly reported book Goliath, which the Israel lobby loathed and tried to dismiss without ever answering effectively. Gaza has brought Blumenthal’s ideas to a point, releasing the pent-up animus and anti-democratic hatred for all the world to see.

This now is Israel, a country whose military relishes unfair fights against poorly armed militias, where imposing collective punishment of innocents is the main point, whose elected politicians pine openly for concentration camps and genocide. Because Israel (like the Germany of early last century) is a country of advanced science and medicine, a country containing hundreds of thousands of individuals who would be perceived as exemplary anywhere in the world, there is a kind of cognitive dissonance: we draw back from recognizing the polity before our eyes because it doesn’t match the image of Israel we grew up with (however idealized and unrealistic that may have been). But yes, Feiglin and Shaked represent the real Israel of today.

What are Americans to do about it? Here perception of the new reality lags but is beginning, ever so slowly, to catch up. Many have noted the polls in which older Americans and Republicans still support Israel in overwhelming numbers. The young, more open in their sources of news, do not. Nor do Democrats. Even in conversations with well-heeled members of the business establishment, one also can sense a sea change—one hears murmurs of disapproval, even outrage, expressed in places (an upscale golf club) where one would never before have heard it. Politicians are the last to reflect this: the Senate passed a unanimous vote of approval for Israel early in the conflict, and the House adjourned leaving all manner of pressing business undone, but making sure, by a 395 to 8 vote, that Israel received more funding for its Iron Dome. (Someday a profile in courage article will be written about this Heroic Eight, a surprisingly geographically mixed and bipartisan group.) As if to explain these votes, Vox published an illustrative real-life memo instructing a Senate candidate in how to fish for funds from the “pro-Israel community.” For his part Obama has so submerged himself in Israeli talking points that intelligence blogger Pat Lang felt compelled to ask whether the president had duly registered himself as a foreign agent.

In Europe, it’s much the same—a bit more tut-tutting than here about the killing of Palestinian children, but no government wants to do anything. (And it wouldn’t be so difficult—if Europe were to simply explore bureaucratic “impediments” to Israeli trade and tourism, in the absence of real progress towards a two-state solution, the Palestinians would likely have a state in a couple of years.) Britain is a possible exception: Labour Party chief Ed Miliband has denounced Israel’s conduct uncategorically, and a Muslim minister has resigned from Cameron’s cabinet—not much, but head and shoulders ahead of the United States.

The American polity will change, probably bit by bit for a while and then in a big rush—as a result of political leadership. The evolution of public opinion towards gay marriage seems a plausible template. But even a changed opinion will have to confront a terribly difficult problem: how to treat Israel, hyper-nationalistic, loaded with nuclear weapons, deeply racist, persuaded that any opposition to it is derived from anti-Semitism, feeling that the Holocaust gives it license to do whatever it wants and that the normal rules of international conduct will never apply to it. It won’t be an easy matter to solve.

Scott McConnell is a founding editor of The American Conservative. The America Conservative is a bi-monthly publication of traditional conservatism, opposed to the tea-party and to neo-cons