Gaza honours the ceasefire. Israel breaks it again and again to show it can.

A fishing boat from Gaza under attack by the Israeli navy. As of February 24, Occupied Palestine said there had been 108 attacks by Israeli forces, many of them on Palestinian fishing boats, which broke the terms of the ceasefire negotiated after Operation Pillar of Defence.

What a ‘period of calm’ looks like in the Occupied Territories

Three months after the last major Israeli incursion into the Gaza Strip, the “period of calm” is only “calm” for Israel.

Since the end of the last Israeli incursion into Gaza, its navy has attacked Gaza fisherman multiple times [Reuters]
Three months have passed since the ceasefire that brought an end to Israel’s eight-day attack on the Gaza Strip known as Operation “Pillar of Defence”. This infographic depicts the number of attacks on the Gaza Strip by the Israeli military during this three-month period, as well as the number of Palestinian attacks emanating from Gaza. Since late November, Israeli attacks on the Gaza Strip have averaged over one a day, everyday. These include shootings by troops positioned along the border fence, attacks on fishermen working off the Gaza coast, and incursions by the Israeli army.

This data is important for three reasons. First, it is a response to the Western media’s failure to cover the vast majority of Israeli attacks. This fits with a familiar and disturbing pattern, where a regional “period of calm” is exclusively defined in terms of attacks on Israelis. “Calm” from this perspective means security for Israelis – but more dead and injured Palestinians. Second, data of this nature lay bare the daily reality for Palestinians and the power imbalance between the occupier and an occupied, colonised people fighting for their basic rights. It is instructive that the Israeli army refers to the entry of its forces into the Gaza Strip as “routine activity”. Meanwhile, Israeli soldiers continue to snatch Palestinians from their homes in the West Bank, enforce segregation, and protect settler land theft. We have included numbers for Palestinians killed and wounded in the West Bank over this same period because developments there and in Gaza ought not to be viewed as isolated from one another.

Third, if or when there is another assault by Israel on the Gaza Strip, the Israeli government and many in the West will seek to emphasise the “rockets” narrative once again. So remember this data, and note what the Israeli army has been doing when – in the words of Israel’s own consul general in Los Angeles – “for the last three months, there hasn’t been a rocket fired from Gaza”. 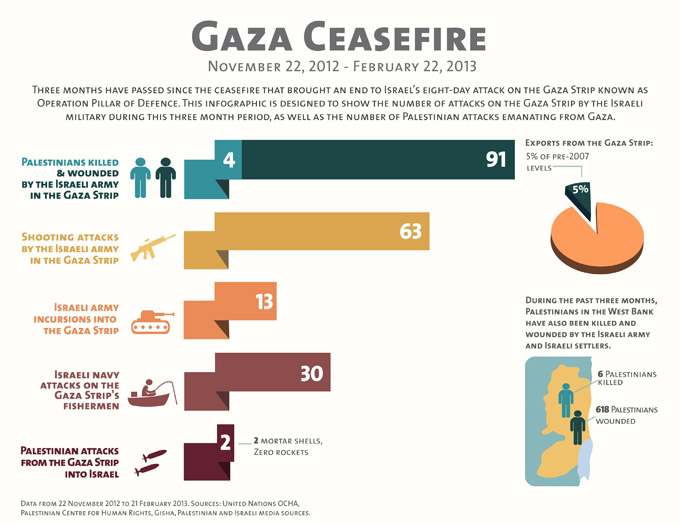 Illustration and design of infographic by Rachele Richards