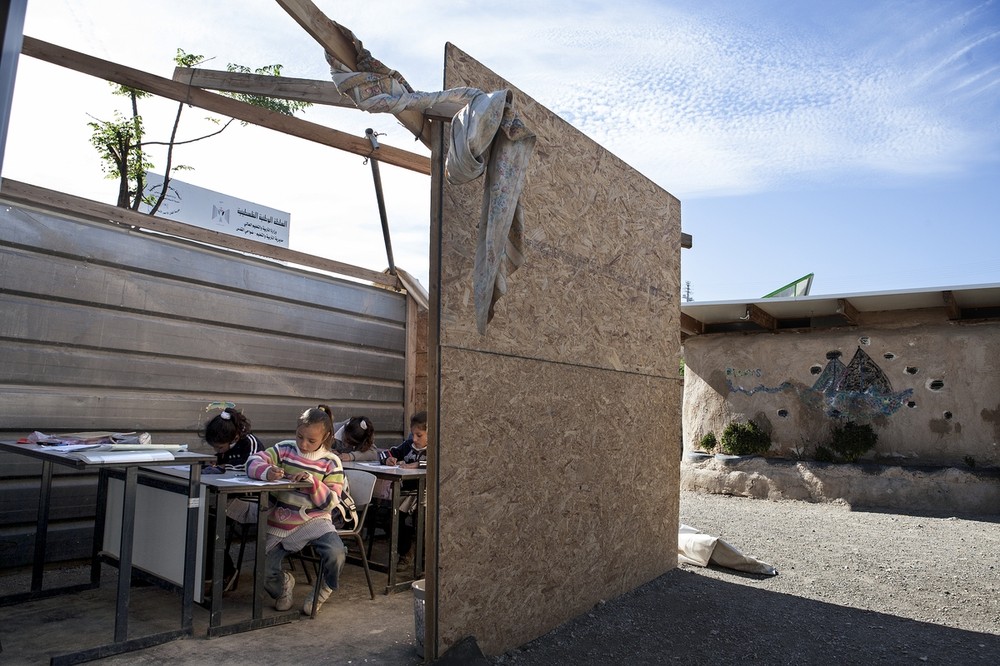 Many of the classrooms in the Khan al-Ahmar school are outdoors. During the cold season, only a tarpaulin  shelters the children from the rain. Photo by Tanya Habjouqa/Al Jazeera

KHAN AL-AHMAR– Dozens of metal and wooden tents cling to the rocky hillside, just outside Jerusalem along the road leading to the Dead Sea, while the unmistakable red roofs of Israeli settlements peak out from behind opposite hilltops.

For 49-year-old Eid Hamis Jahalin, this quiet spot symbolises the potential centre of peace in the region, and one thing is clear: his family must be allowed to stay in its community.

“The Bedouin have been fighting to exist (here) since 1967. Israel has been trying to displace us since then,” Jahalin said, sipping tea in the shade of his family’s tent in the village of Khan Al-Ahmar. The Bedouin are an indigenous people. 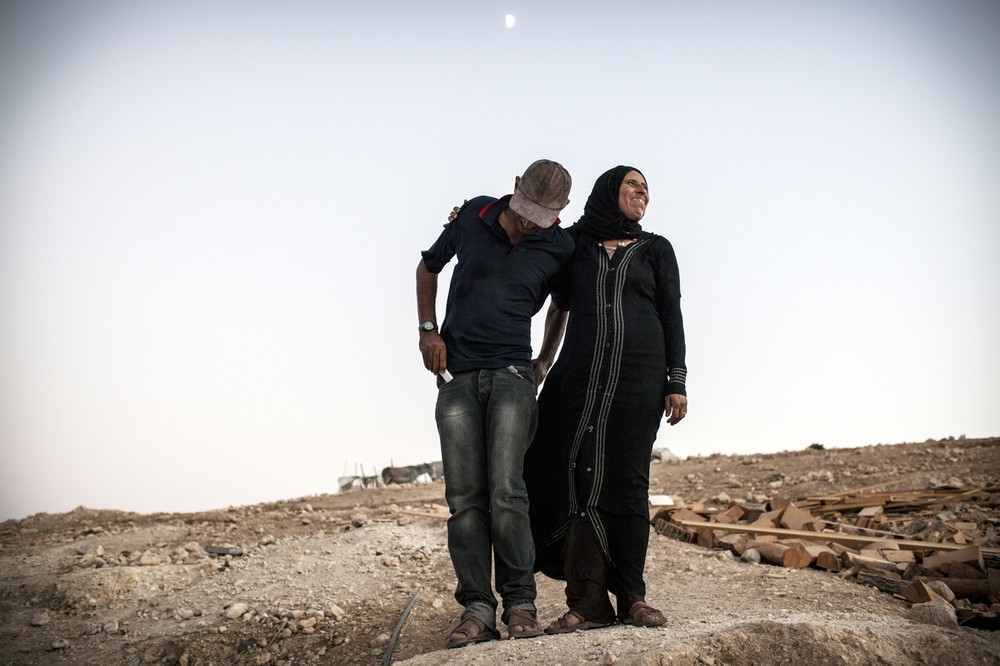 Khan al-Ahmar spokesman Eid Abu Khamis and his wife. According to Khamis, the residents of Khan al-Ahmar and other Bedouin communities are pessimistic about the future. Photo by Tanya Habjouqa/Al Jazeera

“The whole world is talking about two states and two governments. If they get the Jahalin out of here, the border of Jerusalem will be the Dead Sea and the Jordan Valley. After that, where can you have two states?” Jahalin told IPS. 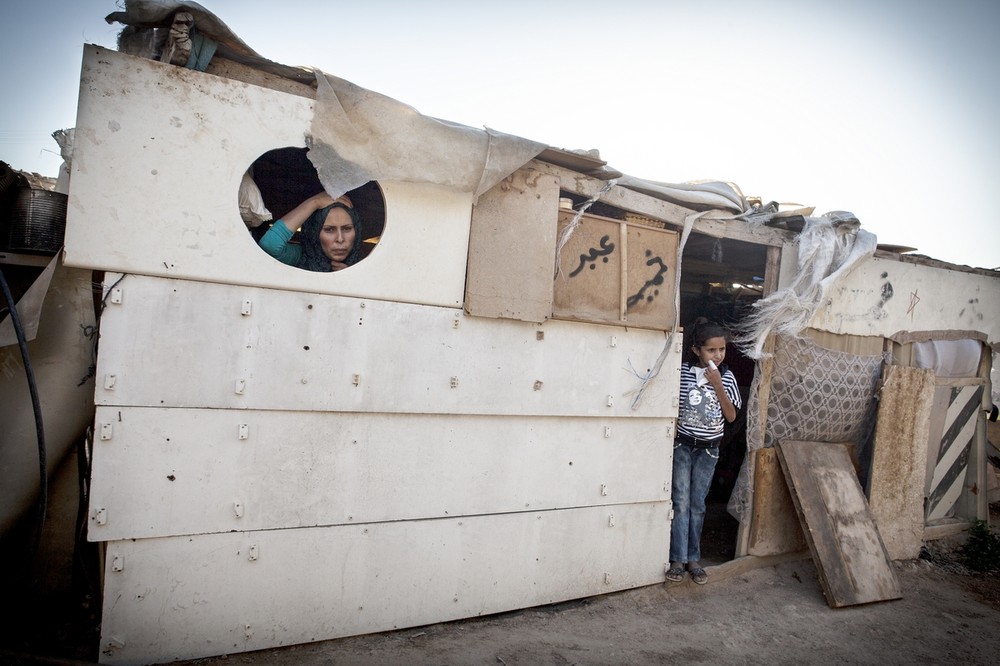 Young girls prepare for school in their living room. The older daughter volunteers in the Khan al-Ahmar school with dreams of pursuing an education, but without access to transportation to get to the nearest city of Jericho. Her younger sister is one of the brightest in her class, but her education will stop at age sixteen. Photo by Tanya Habjouqa/Al Jazeera

This proposal involves forcibly displacing some 3,000 Jahalin Bedouin to an area in Nwei’mah near the city Jericho in the Jordan Valley, which would be under Palestinian Authority control.

“It would put them all together in blocks of 800 units, which of course were not created according to the needs of these communities. They are very small plots. The density is too high. There will be no area for grazing, and this area is already used by other Bedouin communities,” said Alon Cohen-Lifshitz, an architect with Israeli planning rights group Bimkom.

The new plan would also place the Jahalin community between numerous restricted areas, including an Israeli closed military zone, checkpoint and settlements, and a Palestinian Authority security forces training area.

The Israeli government, however, says moving the Bedouin from their current location will greatly improve the quality and level of services they receive.

“They are living there illegally and we are looking at a series of options,” Guy Inbar, spokesperson for the Israeli Civil Administration, told The Media Line, adding that no plan has been finalised yet.

“We want the Bedouin to live in an area where they get all the infrastructure they need, like water and electricity, instead of living in tents that could be demolished.” 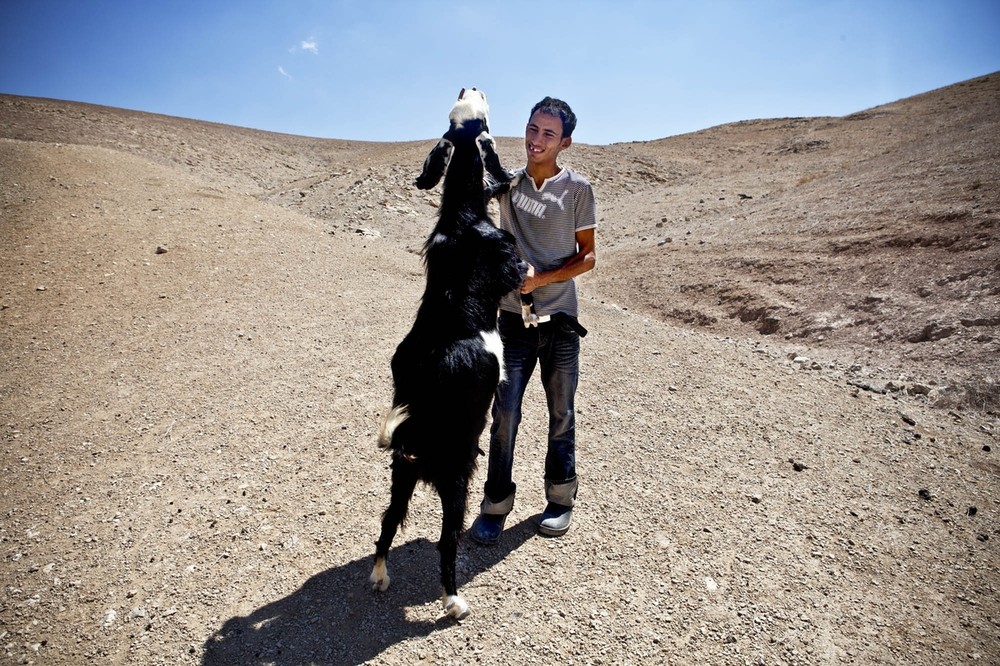 While camel herding is a diminishing feature for the Palestinian Bedouin since they lack the financial ability to maintain them, each family has a herd of goats and sheep, essential to their survival for meat and dairy. More than 200 families were relocated from the area in the 1990s, with more than 85 per cent reporting they had to abandon their traditional livelihoods. Photo by Tanya Habjouqa/Al Jazeera

According to Cohen-Lifshitz, numerous Israeli restrictions have made it so that Palestinian construction in Area C is only allowed on one percent of the land.

“They are trying to create a huge pressure with the demolition orders, with other restrictions, and creating what’s called the silent transfer. If (Palestinians) understand that they cannot live freely in Area C, then people will move to Area A and B, where they can build and live without restrictions,” he told IPS.

The Jahalin Bedouin tribe was evicted from its land near Tel Arad, in Israel’s southern Negev desert region, in the early 1950s. Since then, the community has lived on the outskirts of Jerusalem. It is now surrounded by a handful of Israeli settlements, including the mega-settlement Ma’ale Adumim, which has a population of 40,000.

Residents of Khan Al-Ahmar don’t have access to running water or electricity, and each structure in the village, including the local school, is subject to an Israeli demolition order. Israeli settlement expansion – including construction in the E-1 corridor located near Khan Al-Ahmar – also continues to threaten the village. The expansion would sever East Jerusalem from the rest of the West Bank.

In the late 1990s, in an earlier effort to expand Ma’ale Adumim, Israel displaced 200 Bedouin families living near Jerusalem to a new location near the municipal dumping grounds in Abu Dis, posing a serious health hazard for residents. 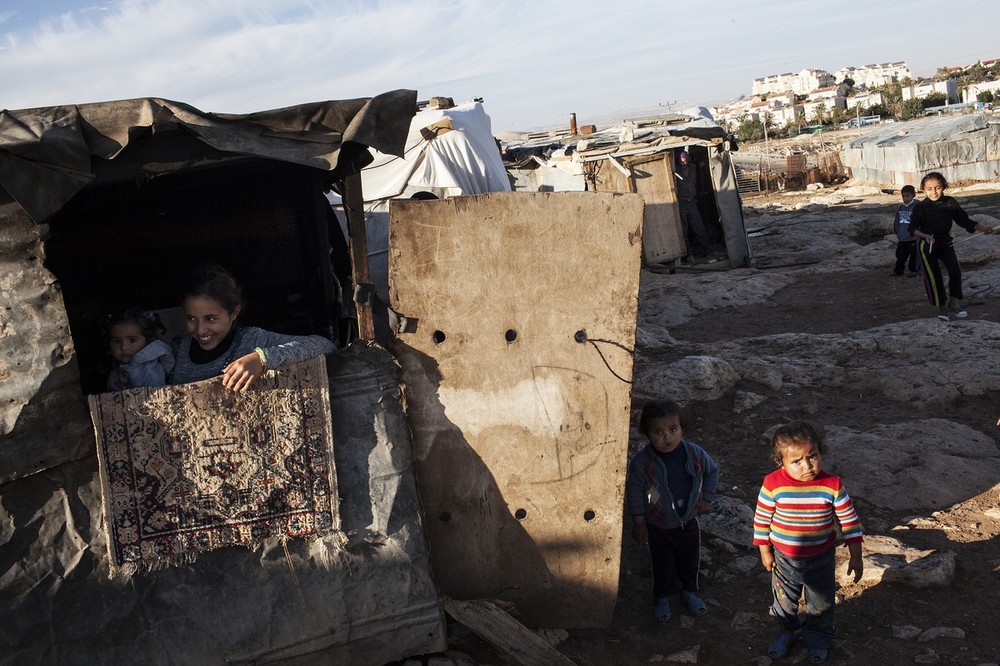 Children from Abu Nowar with Ma’aleh Adumim settlement in background. Like many other communities in the E1 corridor, residents have all lost access to land due to settlement expansion, and most have demolition orders pending against their homes. Photo by Tanya Habjouqa/Al Jazeera

The latest round of expulsions was quietly unveiled in October 2011, with the Israeli Civil Administration hinting that approximately 27,000 Bedouins would be evicted from their homes in the Jordan Valley area within three to six years.

The first phase of this plan – which was met with staunch local and international condemnation – involved expelling the Jahalin near Ma’ale Adumim.

At the time, the UN Relief and Works Agency (UNRWA), which supports Palestinian refugees, stated that efforts to move the Jahalin, “may amount to individual and mass forcible transfers and forced evictions contrary to international humanitarian and international human rights law”.

According to Eid Jahalin in Khan Al-Ahmar, the Israeli government must abandon its new plan to relocate the community. The state has only two options, he said: allow the Jahalin to live peacefully in their current location, or let them go back to their original lands in the Negev.

“I want to live in a Bedouin village,” Jahalin said. “It’s like being a sardine in a tin, one next to another. Take that (relocation) plan and show it to Israelis and see if they would want to live there. Nobody would live there.”

See also
Israel: Cancel plan to forcibly displace Jahalin Bedouin communities, Amnesty International introducing their 2012 report Stop the Transfer.
“Israeli military officials are putting a gloss on their plans by portraying them as a way of providing Bedouin with basic amenities such as water and electricity, but in fact such forcible relocation of Bedouin would merely perpetuate years of dispossession and discrimination and could constitute a war crime,” said Ann Harrison.

Bedouin  JfJfP briefing note, and links to other postings.