The article by David Sheen is followed by one from the International Business Times on PM Erdogan’s response to Ayelet Shaked.

Concerned humanists may have hoped that when a group of Jewish Israelis confessed to kidnapping and killing Muhammad Abu Khudair, a Palestinian teenager in Jerusalem — forcing him to drink gasoline and torching him to death from inside his body — that top Israeli legislators and rabbis would have been horrified at what their revenge rhetoric had triggered, and seriously scaled back their calls for war.

These hopes would have been in vain. In the days since the lynchers were arrested, the anti-Arab rhetoric has continued to ring at a fever pitch. Even as the Israeli army pummels the Gaza Strip with explosives — more than 1,500 tons have been dropped on Gaza by the time of this writing, killing 193 people and wounding approximately 1,200, the vast majority of them civilians — Israeli political, religious and cultural leaders continue to incite sectarian divisions for political profit.

On the eve of Abu Khudair’s lynching, Member of Knesset (Israel’s parliament) and government faction whip Ayelet Shaked issued a call over Facebook to ethnically cleanse the land, declaring “the entire Palestinian people is the enemy.” She advocated their complete destruction, “including its elderly and its women,” adding that these must be slaughtered, otherwise they might give birth to more “little snakes.”

It would be hard to find a more explicit call for genocide.

Days after the lynch, Shaked tried to cover her tracks, angrily insisting that she had merely quoted another person’s call to genocide, not issued one of her own. Yet a week later, Shaked posted another fiery Facebook message in Hebrew, this time warning her constituents that the Jewish cemetery in Jaffa had been torched, subtly implying that Palestinians had purposefully destroyed the graveyard.

In fact, not even a single headstone was singed — Shaked had used news of a fire next door to weave a wicked blood libel.

One day before the lynch, the head of the largest religious Jewish youth group in the world, Rabbi Noam Perel of Bnei Akiva, openly called on his Facebook page for the killing of at least 300 Palestinians, and for scalping their foreskins and taking them as trophies. As most Palestinians are Muslims who circumcise their male children, Perel may well have been calling to murder and scalp not just Palestinians, but Palestinian babies.

After the lynch, Perel issued an apology, clarifying that the Israeli army should have a monopoly on dispensing violence against Palestinians. He did not express any regret for his call to harvest human skin from the penises of Palestinians. A week later, the youth group’s ruling council met and decided not to remove Perel from his post or censure him in any way, saying: “The consensus was … the vast majority of the countries where Bnei Akiva operates were quite happy with the apology.”

Also just hours before Abu Khdeir was burnt to death, the rich and powerful Jerusalem city councillor in charge of municipal security, Aryeh King, issued a similar barely-veiled call to mutilate and murder Palestinians. Speaking on stage to a large assembly of ultra-Orthodox Jews from the Chabad sect, he said, “I am calling out to all the Pinchases that are here … Moses didn’t act, Pinchas acted … every one of us has a mission … The Rebbe, who is here with us, expects us to commit acts of Pinchas.”

Pinchas in the Torah — called Phineas in the English-language Old Testament — was so incensed by miscegenation that he took a sword and plunged it through both bodies of an interracial (Jewish-Midianite) couple in the middle of their lovemaking. The point of King’s sermon might have been lost on a secular audience, but its coded call to murder and mutilate non-Jews, and the Jews willing to mix with them, was understood loud and clear by the crowd of Torah scholars.

On Saturday night, after nearly a week of Gaza being bombarded, a few hundred Israelis gathered in a public square in downtown Tel Aviv to protest the assault and Israeli control over Palestinian lives. They were met there by a gang of secular Jewish thugs who had answered the call of popular Israeli rapper HaTzel to descend on and attack the rally. Israeli police allowed the thugs to charge the crowd and take out their rage on the demonstrators, smashing chairs over their heads.

It did not surprise anyone to see some of these thugs wearing the insignia of the founding father of Zionist fascism, Rabbi Meir Kahane, and the political movement he founded, Kach. But the adoption of a second set of iconography shocked many observers.

As shown in the video above, some of the HaTzel thugs wore clothes emblazoned with “Good Night Left Wing,” iconography that is popular among European neo-Nazi groups.

The Israeli version replaced the Iron Crosses of the original with Jewish Stars of David. This was a call to physically attack leftists opposed to Israel’s attacks on Gaza.

Since the beginning of July, raging crowds of Jewish Israelis just like these have marched through Tel Aviv, Jerusalem, Nazareth and Beer Sheva, chanting “Death to Arabs” and “Death to Leftists,” swarming and attacking vulnerable victims. While a tiny contingent of radical Israelis have formed a loose “anti-fascist” network that tries to patrol city streets and prevent additional lynchings, they are extremely few in numbers and cannot be everywhere at all times.

While Israeli leaders unleash conscripted soldiers to bombard Gaza, they dispatch ultra-nationalist vigilantes to conquer cities inside Israel. With the incitement to murder Palestinians (and the few Israeli allies they have) continue unabated, it seems to be only a matter of time before the bubbling bloodlust boils overs into a bloodbath.

David Sheen is an independent writer and filmmaker. Born in Toronto, Canada, Sheen now lives in Dimona. His website is www.davidsheen.com and he can be followed on Twitter: @davidsheen. 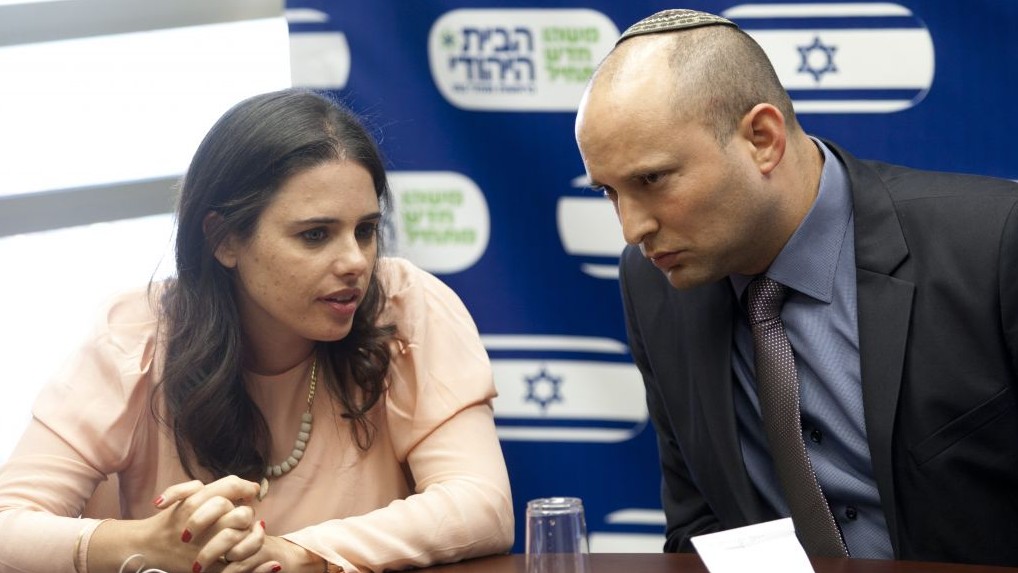 In a controversial Facebook post, Shaked said that “all Palestinians are our enemies” and that Israel should declare war on the “entire [Palestinian] people, including its elderly and its women, its cities and its villages, its property and its infrastructure.”

In a speech to members of his ruling AK Party in parliament, Erdogan said that Shaked’s mindset was no different to Hitler and condemned Israel of their “systematic atrocity and state terror” against the Palestinian people since 1948, according to Turkish newspaper Hurriyet.

“An Israeli woman said Palestinian mothers should be killed, too. And she’s a member of the Israeli parliament. What is the difference between this mentality and Hitler’s?” he asked.

“If these words had been said by a Palestinian, the whole world would have denounced it,” he said.

Erdogan welcomed the Egypt-proposed ceasefire but said that Israel must “immediately lift the illegal embargo on Palestine.”

“What Israel has been using in Gaza since last week is not explainable. Israel continues to terrorise. Moving beyond individual terrorism, it’s now committing state terror,” he continued in his weekly address to his parliamentary group.

The Turkish leader continued by stating that Israeli would never find peace on its borders as long as it continues “these policies”.

“They say, ‘Hamas is rocketing as well.’ Yes, but there are no casualties. You killed 200 Palestinians. The Israeli people will never be in security and prosperity if they continue these policies.

“No country in the world, except Turkey, can stand against Israel’s attacks and urge it to stop. I recall, once again, that those who commit brutalities will sooner or later pay the price,” he warned.

An Egypt-brokered ceasefire collapsed when Hamas rejected the proposal, after claims that they were not consulted by Egypt or Israel. The militant group continued to fire rockets into Israel while Israel resumed airstrikes on the Gaza Strip.