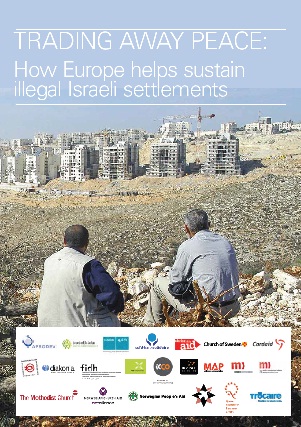 “The gap between Europe’s rhetoric on illegal settlement growth and our actions is widening. We have reached a nonsensical situation where we are economically and financially sustaining the very obstacles to peace we so often condemn. This new report brings together powerful and pragmatic suggestions for a change in policy to truly advance peace,” said Chris Doyle, Director of Caabu.

The European Union imports fifteen times more from Israel’s illegal settlements in the Occupied Palestinian Territory than from Palestinians themselves, a new report [see below] from a coalition of 22 non-governmental organisations including Caabu, Christian Aid UK and Ireland, the International Federation for Human Rights (FIDH) and Diakonia revealed today.

The report, entitled “Trading Away Peace: How Europe helps sustain illegal Israeli settlements”, is the first to compare available export data from Israeli settlements and Palestinians, highlighting the inconsistency at the heart of EU policy. The EU states, “settlements are illegal under international law, constitute an obstacle to peace, and threaten to make a two-state solution impossible” , but continues to provide a primary export market for settlement products. Most EU Member States have failed to ensure products are correctly labelled in stores, leaving consumers unaware of the products’ true origin, contrary to the EU’s own directives.

“Europe says settlements are illegal under international law and yet continues to trade with them. Consumers are unwittingly contributing to the injustice by buying products that are inaccurately labelled as coming from Israel when in fact they are from settlements in the West Bank,” said William Bell, Policy and Advocacy Officer at Christian Aid UK and Ireland.

The report, which has a foreword by the former EU Commissioner for External Relations, Hans van den Broek, calls on European governments to adopt a range of concrete measures to stop assisting settlement expansion and close the gap between words and practice. At a minimum, the coalition is calling for clear labelling guidelines to ensure European consumers do not unknowingly buysettlement goods. Such guidelines already exist in the UK and Denmark.

Trade with settlements has been on the EU agenda since May, when EU Foreign Ministers strongly criticised “the marked acceleration of settlement construction” and for the first time called for full application of existing EU legislation regarding products from settlements.

The Israeli government estimates the value of EU imports from settlements at around €230m a year; compared to €15m a year from Palestinians. The discrepancy is partly driven by Israel’s policy of providing large subsidies to settlers, including for infrastructure, business development, and agriculture while imposing stringent restrictions on the Palestinian access to markets and resources.

Settlers enjoy easy access to international markets, and have established modern agribusinesses and industrial zones. In contrast, the Palestinian economy is “severely constrained by a multi-layered system of restrictions” imposed by Israel, including roadblocks, checkpoints and limited access to land, water, and fertilisers. As a result, Palestinian exports have fallen from over half of GDP in the 1980s to less than 15% of GDP in recent years, effectively invalidating the EU’s preferential trade agreement with the Palestinians.

“The EU spends hundreds of millions of euros in aid each year to support Palestinian state building but then undermines this assistance by trading with illegal settlements, thus contributing to their viability and expansion,” said Dr Phyllis Starkey, former British MP and Trustee of Medical Aid for Palestinians.

Among the settlement goods that are on sale in Europe are dates, grapes, citrus fruits, herbs, wines, cosmetics from Ahava, some of the carbonation devices from SodaStream and some of the plastic garden furniture produced by Keter.

“Goods from West Bank settlements are produced on the back of house demolitions, land confiscations, and military occupation. Governments need to finally move beyond rhetorical condemnations of settlements and at the very minimum ensure consumers can make informed decisions about these products in shops. This is nothing but abiding by European and international law,” said Souhayr Belhassen, President of the International Federation for Human Rights (FIDH).

EXCERPT
Executive Summary
The European Union’s position is absolutely clear: Israeli settlements in the occupied Palestinian territory are “illegal under international law, constitute an obstacle to peace and threaten to make a two-state solution impossible”. Yet this report shows how European policy helps sustain the settlements. it reveals that the Eu imports approximately fifteen times more from the illegal settlements than from the Palestinians themselves.

Israeli settlements are communities established on territories occupied by Israel since 1967. Today there are more than 500,000 Israeli settlers living across the occupied West Bank, including East Jerusalem. Settlements control more than 42% of the West Bank’s land and the majority of its water and natural resources. Their daily encroachment on Palestinian territory undermines the feasibility of the two-state solution promoted by the European Union.

Over the past two years, settlement expansion has accelerated with more than 16,000 new housing units announced or approved. Meanwhile the demolitions of Palestinian structures – including those funded by European donor support – are on the rise, displacing over a thousand people from their homes in 2011, almost twice the number in 2010. The last two years have also seen unprecedented numbers of violent attacks by settlers against Palestinians.

Movement of Palestinians within the West Bank and access to essential services, including hospitals, remains hampered by some 542 obstacles to movement, including roadblocks and checkpoints, despite limited easing in the last years. Access to water also remains hugely unequal with Israel over-extracting West Bank water resources, while restricting Palestinians from drilling new wells and developing their water infrastructure. In some cases, pumping of groundwater to irrigate export crops on settlement farms has dried up nearby Palestinian wells, limiting Palestinians’ ability to cultivate their own lands.

The two economies of the West Bank
Settlement farmers and manufacturers benefit from wide-ranging Israeli government subsidies and enjoy easy access to international markets via government-built roads that bypass Palestinian populated areas. In stark contrast, the Palestinian economy is severely constrained by Israeli restrictions on access to markets and natural resources, the annual cost of which has been estimated at EUr 5.2 billion or 85% of the total Palestinian Gdp. As a result of these restrictions, Palestinian exports have declined from over half of Palestinian GDP in the 1980s to less than 15% of GDP in recent years, effectively negating any benefits of the EU’s preferential trade agreement with the Palestinians.

This has helped create a situation where the Palestinian Authority is dependent on large amounts of funds from the EU and other foreign donors and is currently facing an acute fiscal crisis.

The contradictions of Europe’s trade with Israeli settlements
The most recent estimate of the value of EU imports from settlements provided by the Israeli government to the World Bank is $300m (€230m ) a year; this is approximately fifteen times the annual value of EU imports from Palestinians. With more than four million Palestinians and over 500,000 Israeli settlers living in the occupied territory this means the EU imports over 100 times more per settler than per Palestinian.

The most common settlement products sold in Europe include agricultural products, such as dates, citrus fruits and herbs, and manufactured products including cosmetics, carbonation devices, plastics, textile products and toys.

Despite its firm position that settlements are not part of Israel, Europe has been accepting imports of these settlements products with origin designated as “Israel”, thus acquiescing to Israel’s extension of its sovereignty over the occupied territory. Many of these products are also sold in European stores under the misleading label “Made in Israel”, denying consumers their right, under existing EU consumer protection legislation, to make informed decisions when they shop. As a result, many European consumers are unwittingly supporting the settlements and the attendant violations of human rights.

Beyond the trade in settlement goods, some European-owned companies have invested in settlements and related infrastructure or are providing services to them. Cases that have been reported include G4S (UK/Denmark), Alstom (France), Veolia (France), and Heidelberg Cement (Germany).

Others, such as Deutsche Bahn (Germany), AssaAbloy (Sweden), and Unilever (Netherlands) have already ceased their activities in the West Bank in recent years, setting an example for the companies still doing business in the settlements.

Adding to the contradictions at the heart of EU policy towards Israel’s illegal settlements, the EU has failed to fully exclude settlements from the benefits of its cooperation programmes and bilateral agreements with Israel. In several cases, EU public funds for research and development have been used to directly support activities in settlements. The newly ratified EU-Israel Agreement on Conformity Assessment and Acceptance of Industrial products (ACAA), is another example of EU’s failure to insist on a firm distinction between Israel proper and the illegal settlements.

The way forward
The many linkages with settlements are inconsistent with Europe’s obligations under international law, which stipulates that third parties, including European governments, have the duty not to recognise, aid or assist settlements as well as the duty to effectively oppose them. By trading with settlements and contributing to their permanence, the EU is also undermining its years of political and financial investment in Palestinian state-building efforts. There is a growing awareness among European governments of the need to close the gap between their rhetoric on settlements and their practice. The British and Danish governments have already taken concrete steps by adopting guidelines for correct labelling of settlement products. But there is much more that national governments and the EU can do to ensure their policies do not directly or indirectly support settlements and the associated injustices.

Recommended measures (for national governments and the EU as appropriate)

2. As a further measure, discourage businesses from purchasing settlement goods and from all other commercial and investment links with settlements, by means of formal government advice.

3. As a more comprehensive option, ban imports of settlement products, as called for by Ireland.

5. Exclude settlements from bilateral agreements and cooperation instruments with Israel by means of explicit legal provisions and safeguards.

8. Prevent financial transactions to settlements and related activities by means of applying restrictive measures, as a more comprehensive approach.

Other measures
9. Discourage citizens from buying property in settlements by means of formal advice, as already done by several EU member states.

11. Draw up a list of companies misstating the origin of settlement goods as ‘Israel’ as requested by the European parliament.

12. Insist that Israel disaggregates settlement data provided to the Organisation for Economic Co-operation and Development (OECD).