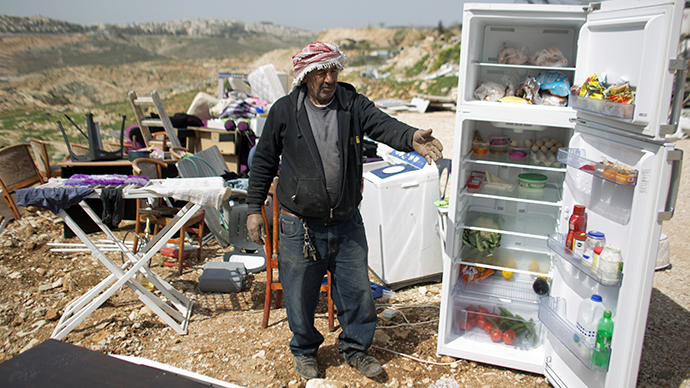 A Palestinian comes to collect the family’s belongings after his EU-funded metal shelter was demolished. When Israeli authorities do give a reason for their swaths of destruction, they say it is because the Palestinians did not have planning permission. They do know, of course, it is virtually impossible for a Palestinian to get planning permission to build on land controlled by the IDF or ICA. Photo by Ahmad Gharabli / AFP

Benjamin Netanyahu has secured his fourth term as Israel’s prime minister, thanks in no small part to his last-minute embrace of outright alarmism and intransigence. In the last few days of a bitter campaign, he vowed never to allow the creation of a Palestinian state and promised to continue building in occupied east Jerusalem.

He is now trying to row back on those commitments, but the damage to hopes of progress in the conflict has already been done.

But while the Obama administration reacted coolly to say the least to Netanyahu’s triumph, many of Europe’s leaders were depressingly pliant.

David Cameron was one of the first world leaders to congratulate Netanyahu. Similarly, Federica Morgherini the EU’s high representative for foreign affairs and security policy, was quick to follow suit, optimistically saying she hoped for a relaunch of the peace process.

German-funded solar panels have provided electricity to small villages which have no electricity. Israel has threatened to demolish this one, near Susya, because it is in Area C. (So what?)

That said, there were a few less sanguine voices. One of Europe’s most senior diplomats, Sweden’s Carl Bildt, took a very different line:

Bildt’s pessimism is very understandable, but there is a way to change the situation. Europe actually has a number of tools at its disposal to curb the Netanyahu government’s excesses and simply needs to use them properly.

The EU has hugely invested in the Israel-Palestine conflict, politically, financially and economically. The EU has sent millions of euros to Palestine through its International Cooperation and Development and Humanitarian Aid and Civil Protection programmes.

But the impact of that enormous commitment is hard to discern, since the situation on the ground remains dire. Palestinian areas are struggling for basic economic viability and suffer from serious donor dependency, unemployment, poverty and fiscal shortfalls.

But instead of improving people’s lives in a meaningful way, the EU’s assistance to Palestine has become a life-support mechanism for the status quo, preserving the occupation and merely rebuilding what Israel destroys. There is little value in funding state-like institutions and community police units that Israel does not allow to function. All in all, the EU’s efforts in Palestine are little more than a terrible waste of taxpayers’ money.

Meanwhile, the EU gave up a major opportunity to be a serious player in the conflict when it refused to recognise the democratically elected Hamas government after the 2006 elections – elections acknowledged as fair, free and transparent.

The occupied Palestinian territory today is politically fractured, authoritarian and dysfunctional. The PA’s governance standards have deteriorated, the Palestinian judiciary still lacks independence, and the Palestinian Legislative Council has not been convened since 2007.

In the meantime, the EU has doubled down on its relations with Israel, investing in its industries and exports to the detriment of the Palestinians.

It doesn’t have to be this way. If the European Parliament, the only democratically elected and accountable institution at the EU level, starts to act out of respect for its own founding ideals, then Europe can really start to improve the situation.

Letter of the law

The EU needs to sort out what its values of justice really are, and ground its response to the Israel-Palestine conflict in a genuine commitment to international humanitarian law. After all, EU states have no claim to integrity until they insist on the rule of law and actually uphold it.

That much is clear in the wording of the EU-Israel Association Agreement, Article 2 of which puts it clearly:

Relations between the parties, as well as all the provisions of the Agreement itself, shall be based on a respect for human rights and democratic principles, which guides their internal policy and constitutes an essential element of this Agreement.

In that light, MEPs must pressure the governments of the EU to stop allowing Israel’s military sector to benefit from EU funds. Europe’s research programme, Horizon 2020, grants various funds to Israel, and among the companies set to benefit is ELBIT Systems, a drone manufacturing company whose products have been used against the Palestinian people and other groups worldwide, including in Latin America.

Another powerful way to make Israel feel the cost of the occupation would be by actually enforcing EU guidelines that apply to products emanating from settlements. These guidelines could end the ambiguity that has allowed Israel to maintain and expand its presence beyond the 1967 borders without significant penalties. Jewish settlements in occupied Palestinian territory are not considered part of the state of Israel under international law, but Israel’s foreign funders have not yet acted accordingly.

The EU and its citizens can make a difference. Now Netanyahu has been re-elected on a harsher platform than any he has taken before, time is of the essence – and the necessary course of action clearer than many would admit.

What are British values

“I would say freedom, tolerance, respect for the rule of law, belief in personal and social responsibility and respect for British [national] institutions. Those are the sorts of things I would hope would be inculcated into the curriculum in any school in Britain,” Mr Cameron, on a visit to Sweden, said. The Telegraph, June 2014

While these may be the values of all western democracies they are clearly not Israeli values. The EU should stop treating Israel as an EU member until it subscribes to EU values. Tolerance? Rule of law? Freedom of Movement?

Michelle Pace is Professor with Special Responsibilities, Department of Society and Globalisation, University of Roskilde, Denmark. Her main areas of research include the External Relations of the European Union with special emphasis on relations with the Middle East and North African (MENA) region. She is also Honorary Professor in Politics and International Studies at the University of Birmingham in the UK….She has supervised a study of the Danish Arab Partnership Programme and is the academic evaluator for the Danish policy towards Palestine.

She is co-editor of the peer reviewed journal Mediterranean Politics. She was founder and convener of the British International Studies Association Working Group on International Mediterranean Studies (until 2013) and of the research group on the EU and democracy promotion efforts in the Middle East (2008 – to date)