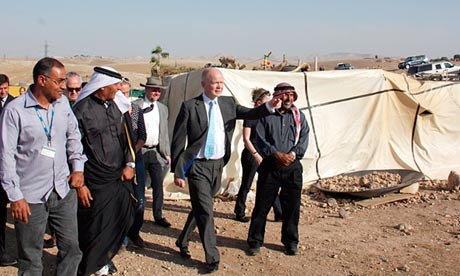 UK Government: ‘We do not encourage settlement trade’

The Foreign Secretary has finally issued his long-promised business guidance to UK firms engaged in trade with illegal Israeli settlements in the West Bank – as he has been urged to do by MPs from all the main parties.

Although he does not go as far as he has been urged to, he does tell UK firms in clear terms that “we do not encourage” firms to trade with illegal settlements and “we do not offer support” to firms that do.

Business guidance is purely advisory, but most UK firms will abide by the FCO’s country-specific guidance published on the Department of Trade and Industry’s* Overseas Business Risk Register.

The guidance restates the Foreign Office view that settlements are “illegal under international law, an obstacle to peace and threaten to make a two-state solution impossible”.

It then goes further by saying:

• We do not encourage economic or financial activities in the settlements. We do not offer support to such activity.

• Firms must be aware of legal and economic risks in financial transactions, investments, purchases, procurements, other economic activities, including tourism, in Israeli settlements or benefiting Israeli settlements owing to disputed titles to land, water, mineral or other natural resources.

• They must also be aware of potential reputational implications of getting involved in economic and financial activities in settlements.

• They must be aware of possible abuses of the rights of individuals. Those contemplating economic or financial involvement should seek legal advice.

• The UK will continue to enforce the labelling guidelines to identify settlement goods because “we understand the concerns of people who do not wish to purchase goods exported from Israeli settlements”.

• The UK will also continue to enforce the EU ruling that denies imports from illegal settlements the preferential tariff that applies to Israeli and Palestinian imports.

In a move that seemed designed to avoid publicity, the advice was uploaded to the DTI* website last Tuesday without any announcement or press release and was not even mentioned during that day’s Foreign Office questions.

It will however have the effect of increasing the pressure on Israel to start making some overdue concessions in the peace negotiations which have now reached the half-way stage without any sign of significant progress.

By referring to the reputational risk of trading with settlements, it will also increase pressure on firms such as G4S and Veolia to pull out completely from their involvement with the Israeli occupation.

US State Secretary John Kerry was in Jerusalem and Ramallah again last week trying to re-energise the talks, but it is fast becoming clear that progress is severely hampered by the continuing expansion of settlements.

The Government’s new business advice does not go as far as recommended by the British and other EU ambassadors in a confidential report to the EU last year.

As leaked copies of the report showed, they recommended that EU governments should “prevent/discourage financial transactions in support of settlement activity”.

During the summer there was a protracted argument, both within the EU and the Foreign Office, over whether to use the words “prevent” or “discourage” or to water the advice down to a morally neutral statement that firms should “be aware of the risks” of trading with settlements.

The Foreign Office has gone for a half-way house, not actually discouraging firms but not encouraging them either. But since the purpose of the DTI* website is to encourage trade, to say trade with settlements is ‘not encouraged’ is tantamount to saying it is ‘discouraged’.

This is a minor breakthrough because until now the Foreign Office policy has been to do nothing while the talks are in progress on the grounds that that any initiative would “destablise” the talks.

In practice the opposite has been true. It was an EU initiative in July, that persuaded both Israelis and Palestinians to sit down to talks because it persuaded them that the EU would at last follow up on its threats.

The Foreign Office has clearly agonised for a long while of this step as the new business guidance was promised in August, and then by the end of September, but it can hardly be described as radical.

Even the Dutch and the Germans, traditionally the Israelis’ strongest allies in the European Union, have already gone further and discouraged their own companies from trading with settlements.

The Dutch government discouraged the engineering firm Royal Haskoning from participating in a project in East Jerusalem and the company heeded the advice and withdrew from the project.

The Dutch foreign minister Frans Timmermans said: “Although not prohibited, economic relations between Dutch companies and companies in the settlements in the occupied territories are discouraged by the Dutch government.”

The German transport minister opposed the involved of the German rail company Deutsche Bahn in an Israeli train project that cuts through the occupied West Bank. Deutche Bahn ended its involvement in the project shortly after.

The next steps for the Foreign Office would be to upgrade its business advice to “discourage”, to intervene with individual companies before they sign contracts, to clarify the rules on public sector procurement so that councillors do not feel threatened by surcharges if human rights issues are taking into account and ultimately to ban all financial relationships with companies that operate in illegal settlements.

What the EU settlement ‘compromise’ will mean on the ground

The European Union will not impose a blanket ban on loans to Israeli entities that operate on both sides of the Green Line. That was the most important concession the EU made in watering down its settlement guidelines in the face of Israeli pressure, preliminary reports of a compromise detailed Tuesday evening.

Instead of banning financial instruments to any company that operates on both sides of the Green Line, as the original wording would have done, the new reported compromise will put the burden of proof on an applicant or recipient to show how they will ensure EU funds do not inadvertently finance settlement activity, Haaretz and other Israeli media reported.

The importance of that concession for Israel is massive. In the domestic Israeli market, there is no Green Line as far as commerce and trade are concerned. Barring financial instruments, i.e. loans, to any company or institution that operates on both sides of the Green Line would have effectively made most Israeli companies and institutions ineligible.

For example, an Israeli petrol company might have been ineligible for EU loans because it operates petrol stations in the West Bank. Now, it must only show how it will prevent EU funds from reaching those gas stations.

On the European side, there is actually little change in the practical applications of the new wording. The point of the blanket ban on granting financial instruments to bodies that operate on both sides of the Green Line was to prevent inadvertent EU funding of settlement activity. With a requirement to make sure that EU money doesn’t make its way to settlements, however, the original goal is fulfilled.

The second change, as reported by the Israeli media, appears to be a semantic change designed to assuage Israeli fears that tacitly accepting the EU guidelines would somehow open it up to international legal action over the illegality of the settlements under international law. While the Horizon 2020 agreement will in the end include a clause saying it must adhere to the EU settlement guidelines, Israel will be allowed to attach an objection to that clause.

The objection is similar in nature to American presidential signing statements, made famous by George W. Bush, who would attach a statement to many laws he signed explaining which parts he did not accept and would therefore not enforce.

As explained in the Haaretz article, the details and wording of the compromise agreement have yet to be signed by the political echelon, so all of this could still change in the coming hours and days.

One thing, however, is for sure: the game changed. While Israel was not excluded from a very important agreement, thereby bringing about tangible consequences for the settlements and ultimately for the occupation, the Netanyahu government was forced onto the defensive.

As Noam Sheizaf wrote earlier today before news of the compromise was announced:

For the first time in decades, a serious debate has started among local elites about what isolation the occupation could cause Israel.
…
This national conversation – long overdue – is more important than anything in the guidelines themselves.