The former Pink Floyd front man scores high for boycott buzz but the a decision by the Dutch company to quit Israel is more worrying.

You’ve probably heard of Roger Waters, or at least his erstwhile band Pink Floyd. But does Royal HaskoningDHV ring a bell?

Here’s a hint. Both scored a few points for the campaign to impose boycotts, sanctions and divestment on Israel in recent weeks.

Should we be worried? A little, and not because of Waters. We should be worried because of that nearly anonymous Dutch engineering company.

On the Boycott Israel Buzz meter, Waters, the former front man for Pink Floyd and composer of its greatest hits, scores a solid 8.5 out of a possible 10. Royal HaskoningDHV might score a 2, and that’s only because it’s Holland’s largest engineering company.

Waters, who has been a long time proponent of BDS, resurfaced again last month with a letter calling on “my brothers and sisters in the family of Rock and Roll” to declare a cultural boycott of Israel. Accusing Israel of Apartheid and ethnic cleansing, Waters harkened back to the glorious history of the cultural and sports boycott of South Africa that led the downfall of the white regime.

Meanwhile, in early September, Royal HaskoningDHV reluctantly announced that it was pulling out of the Kidron waste water treatment project in East Jerusalem.

Being a bunch of engineers, not poets, the company employed something less than ringing language:

The writing on The Wall

Waters’ accusations of Apartheid and ethnic cleansing are unfounded and his history of South Africa isn’t borne out by the facts, but that doesn’t mean he won’t be heard by virtue of the fact that he is a cultural icon of sorts. Okay, he may not be an A-list celebrity but he has a little more intellectual heft that, say, Miley Cyrus, by virtue of being associated with the freedom anthems from his rock operetta The Wall. His fans are older and more thoughtful.

Royal HaskoningDHV probably stands on firmer ground by citing international law, but on the other hand abandoning the project is intellectually absurd. The Kidron project aims to clean up raw sewage that flows through Palestinian villages and would have benefitted Palestinians, not settlers. It was being led by a joint venture between Israelis and Palestinians.

But let’s not dwell on the rationales of either Waters or Royal HaskoningDHV because it’s not relevant to whether BDS will ever succeed. History is littered with lots of bad ideas that have nevertheless caught on because they represented too tempting a vision for the facts to get in the way. Using the words “Apartheid,” “ethnic cleansing” and “a violation of international law” makes the BDS idea hard to resist. What, you’re in favour of violating international law?

Waters’ call for a cultural boycott has the potential to administer a painful sting, but it’s far from a fatal one as he suggests in his letter.

Every time Elvis Costello or The Pixies make a public display of not performing in Israel, or for that matter Stephen Hawking’s declining to give a lecture, it hurts. These are people admired by the global public, Israelis included, and they enjoy a certain credibility that ordinary mortals do not. Hawking is a supremely intelligent man and Waters is a talented artist. If they think Israel is so wicked, well, there must be something to it.

Of course, some of the worst ideas to enjoy a big splash – take communism – have won the enthusiastic backing of artists and intellectuals. But that hasn’t hurt their standing as cultural icons and opinion leaders who[se] views on things totally unrelated to their acknowledged skills or talents enjoy respect and influence.

In any case, for now the cultural BDS campaign hasn’t been particularly successful, but if things change, the fact is that Israel can hunker down and download “The Wall” rather than hear it live.

Why the company’s boycott matters more

Royal HaskoningDHV’s decision, however, has far more serious implications than our Boycott Buzz meter’s readings tell us. That is because the company buckled to pressure from the Dutch government.

A consumer boycott of Israel or companies doing business with Israel has virtually no chance of succeeding because it’s almost impossible to refrain from using Israeli-made products. You can’t find them on store shelves or in the malls, except in a few marginal cases like Dead Sea Cosmetics and Max Brenner chocolates – but they’re in electronics sold world-wide, for instance.

Likewise, most of the foreign companies doing serious business with Israel, such as Intel and Coca Cola, are too big, too ubiquitous and too popular to boycott.

Maybe with the help of Roger Waters and Stephen Hawking, Israel’s alleged crimes will eventually create a wave of global consumer resentment, but we’re a long, long way from that. What could speed the BDS drive along is if governments begin to support it.

As the Royal HaskoningDHV case showed, official pressure is far faster, effective and more efficient than grassroots pressure with its petitions and protests can ever be.

We’re also a long way away from governments imposing boycotts on the settlements, much less on Israel. The subject would be laughed out of Washington, and the up-and-coming economies of Asia don’t like to mix politics and business. But in Europe we are moving ever closer.

The European Union’s decision this summer to cease funding institutions and companies operating over the Green Line was a timid step, subject to endless hand-wringing about how to implement it. But it has already created a bigger problem for Israel than Roger Waters could ever hope for, by putting Netanyahu’s government in an awkward position when negotiating the 80-billion-euro Horizon 2020 scientific research program.

Israeli universities and companies stand to benefit enormously from the funds that will available, but the government is beholden to the settlers who don’t want to be cut out, even symbolically. Israel should have a pen out ready to sign on, but instead is now engaged in protracted negotiations.

The Kidron Valley, below,  runs north-south between the Mount of Olives and the eastern wall of the Temple Mount   falling  4,000 feet to the Dead Sea. The Gihon Springs once filled this valley, but the settlers of Jerusalem diverted the water into pools and channels for their use. Untreated sewage and rubbish now pollute the valley. Kidron adjoins the valley in East Jerusalem 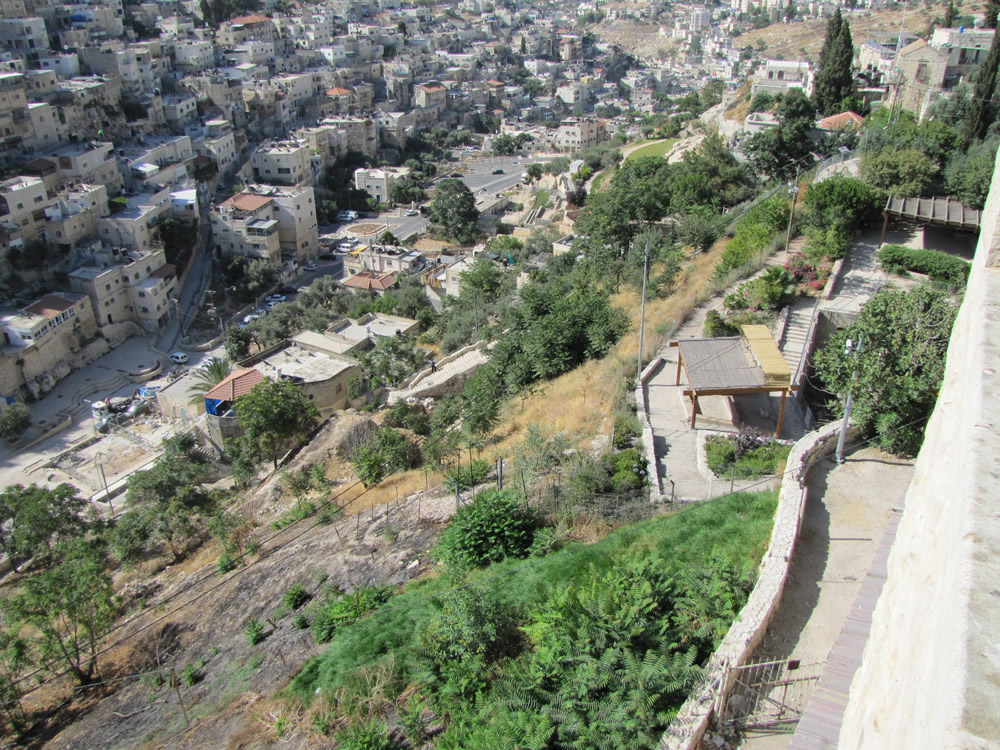