Digging for dirt: the campaign against Stephen Sizer 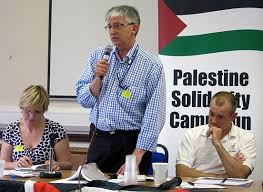 Stephen Sizer has been active for many years in areas of humanitarian concern for the Palestinian population. I was with him on my recent trip to Baghdad, and I am convinced he is a good man.

Stephen is a Church of England vicar. He is under huge pressure at the moment as he is under a formal complaint from the Board of Deputies of British Jews to the Church of England on a charge of anti-semitism. This is very serious indeed and could lead to the loss of both his job and his home.

The essence of the long complaint is that he has posted links on his website to other websites which contain anti-semitic material. It is not alleged that he has linked to material which is itself anti-semitic; but that elsewhere on websites linked to there is such material.

That may or may not be true. But in the real world, the idea that in posting a link to an article you are endorsing every other article (which in practice you cannot have seen) on a website is nonsensical and would make much current blogging practice impossible.

That Stepehn is not an anti-semite and has not knowingly endorsed anti-semitism, I have no doubt. But what worries me is the growing bravura with which all critics of Israel or supporters of the Palestinians are charged with the – rightfully – damning slur of anti-semitism.

Just as the government of Israel has lurched to the far right, so “official” Jewish institutions in the UK have abandoned their once notable liberalism. The Board of Deputies used to deserve high respect and be a pillar of reason. It is astonishing to me that it has launched this absolutely unfounded attack on an Anglican priest. The Jewish Chronicle has lurched so far to the right as to be off the scale. There seems to be such a disconnect now between these institutions and the views of the Jewish people I know that I hope this state of affairs cannot last.

A list of those who have written in support of Stephen Sizer can be found here.

The formal process in which Stephen is now enmeshed is not only extremely unpleasant, it is also extremely expensive. He has to employ lawyers for his formal defence. A cardinal rule of this blog is never to ask for money, but I ask you now to donate for the defence fund.

It is important that we do not allow the victimisation of those who try to defend the Palestinians to proceed apace. Please do donate anything you can; if you feel able to add a comment saying that you have done so, that might encourage others.

One link does not equal antisemitism
By JfJfP postings editor
January 14, 2013

The most recent denunciation of Stephen Sizer is in Harry’s Place, a website which seems to exist for the sole purpose of witch-hunting. Its research into who or what is antisemitic seems to consists entirely of finding critics of Israel who have inadvertently, ignorantly, foolishly, used material which links to a genuine antisemitic website. (The trouble with all blogs is that they are the one form of publication in which there are no editors or sub-editors to check for appropriateness, readability, accuracy, consistency, spelling, grammar, defamation…)

On January 8th Harry’s Place published Stephen Sizer and an antisemitic website. This refers to a long and serious document by Sizer, Child Abuse: Palestinian Children in Israeli Prisons. At 12 pages long, and some 5,000 words, the only words of note which Harry’s Place found were three at the end: Welcome in Palestine (WiP). This is the antisemitic link.

At first sight, WiP is a standard website documenting the abuses of Palestinians’ human rights. These, and no antisemitic links or material, feature on its homepage. However if you search – and you have to search – there is a most obnoxious page promoting the Protocols of the Elders of Zion, the notorious forgery/hoax about a world Jewish conspiracy, probably produced by the Tsarist secret police in 1903. This was the Warrant for Genocide discussed by Norman Cohn in his book of the same name.

Does that one link make a document or a person, antisemitic?

These are the people and sources which Stephen Sizer links to, mentions and actually quotes in Children in Palestine:

● spokesmen for the IDF

● ‘Jesus said, “Let the little children come to me, and do not hinder them, for the kingdom of heaven belongs to such as these.” (Matthew 19:14)

● “But if anyone causes one of these little ones who believe in me to sin, it would be better for him to have a large millstone hung around his neck and to be drowned in the depths of the sea.” (Matthew 18:6)

● Defence of Children International (DCI) : Bound, Blindfolded and Convicted: Children held in military detention. The report is the culmination of four year’s work by DCI, with the support of the European Union, focusing on verifying reports of ill-treatment and torture of children in the Israeli military detention system.

● The report funded by the UK Foreign Office: Children in military custody. The report found that Israel is in breach of a series of articles under the UN Convention on the Rights of the Child and the Fourth Geneva Convention. This report was covered in the UK by:

● The Independent – Nothing resonates like the mistreatment of minors

● The Guardian – Israel subjecting Palestinian children to ‘spiral of injustice’

● No Minor Matter: Violation of the Rights of Palestinian Minors Arrested by Israel on Suspicion of Stone-Throwing, July 2011 , B’Tselem report on Israel’s violation of the international convention on the rights of the child, which Israel has ratified, and the fourth Geneva convention.

● Several British parliamentary delegations have witnessed child hearings at Ofer [prison] , Lord Alf Dubs reported back to the House of Lords last May, saying: “We saw a 14-year-old and a 15-year-old, one of them in tears, both looking absolutely bewildered … I do not believe this process of humiliation represents justice. I believe that the way in which these young people are treated is in itself an obstacle to the achievement by Israel of a peaceful relationship with the Palestinian people.”

● Lisa Nandy, MP for Wigan. witnessed the trial of a shackled 14-year-old at Ofer last month, found the experience distressing. “In five minutes he had been found guilty of stone-throwing and was sentenced to nine months.”

● Coerced False Confessions: The Case of Palestinian Children: Psychiatric Expert Opinion By Graciela Carmon, a child psychiatrist and member of Physicians for Human Rights. She said that children were particularly vulnerable to providing a false confession under coercion.