The article by Edo Konrad, +972 is followed by one from Amira Hass, Ha’aretz on the Israeli blind eye.

Shops in Magdeburg with their windows smashed (and stock looted) on the night of November 9/10. In an episode named ‘kristallnacht’ (broken glass) 1,000 synagogues were burned and over 7,000 Jewish businesses destroyed or damaged in Germany and Austria. For the first time, many European media and governments took the Nazi threat seriously. The German authorities looked on and did nothing to halt the violence.

Settler violence: Think of it like burning down a Jewish business

When violent hate crimes happen so often they become a non-story.

Imagine a series of attacks on shops and businesses in your city. Every night, a gang of hooligans breaks windows, damages goods and sets fire to a different store.

Now imagine that this same gang only targets businesses owned by a specific group of people – say, a chain of local stores owned and operated by blacks or Jews. The attacks go on for years and only worsen with time. If the store owner happens to be there, he or she is beaten and left bleeding at the front door.

A Palestinian farmer from the village of Qaryut inspects the remains of his 300 olive trees on October 9, 2012, after they were uprooted overnight by Israeli settlers.

In the United States and Europe these kind of acts would be deemed “hate crimes.” In Israel, the targeting of, say, Jewish-owned businesses would be decried as an act of “terror” by politicians and the press. If the problem persists, it may even become an internationally-recognized issue. Petitions will be signed. Ambassadors will be called to explain. Communities will mobilize.

For a Palestinian farmer, the olive grove is his business.

The past several years have seen thousands of trees burned, cut down or damaged in dozens of incidents, including “price tag attacks” – a form of vandalism or property destruction, sometimes carried out in protest of a certain governmental decision that the perpetrators don’t like, and sometimes for no reason other than hate. Farmers have been shot at, beaten, and have had their cars burned. Some have suffered severe injuries, others have lost the little property they own. For almost everyone, the yearly olive harvest – taking place this time of year – has become a time of deep fear and anxiety.

According to Rabbis for Human Rights, nearly 2,000 Palestinian olive trees have been either uprooted or burned across the West Bank in recent months alone. Palestinians and their Israeli and international allies are routinely attacked while attempting to harvest olives. A recent video posted by my colleague Michael Omer-Man shows settlers violently beating a Palestinian olive harvester with a metal pole.

Just yesterday, Amira Hass reported in Haaretz about a leaked document that describes 16 separate incidents in which Israeli settlers vandalized or set fire to Palestinian olive groves during the months of September and October. Her report suggests that not only did the government and army fail to act against those attacks – they decided to keep knowledge of the attacks secret. 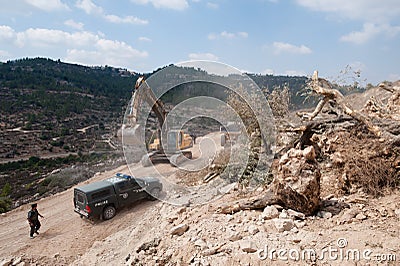 An Israeli Border Police soldier guards earth-moving equipment near a pile of olive trees cut down to make way for the Israeli separation barrier surrounding the West Bank town of Al-Walaja. Photo by Rodrick Beiler

According to Yesh Din, only 8.5 percent of investigation files between 2005-2013 ended in the indictment of Israelis suspected of harming Palestinians and their property.

It seems that the growing number of attacks has not caused Israeli authorities to respond. Actually, quite the opposite has happened: price tag attacks have become a “non-story” in the international media. When reference to the attacks is made, it often comes in the form of an exotic dispute taking place in some distant country but is never called out for what it is – an organized campaign of terror against a defenseless civilian population.

Why isn’t the targeting of Palestinian olive trees considered an act of terror, given that for many these trees are their livelihood? Surely the White House would issue a statement condemning a string of attacks on Jewish businesses in Tel Aviv, London or New York – so what makes Palestinians less worthy of our concern?

When it comes to Palestinian businesses, it seems that both the government and the mainstream media prefer to turn a blind eye. At worst, they purposefully hide the information from us.

It’s time to wake up to the reality in the West Bank and view these attacks on Palestinians and their livelihoods for what they are.

Olive orchards are being destroyed in the West Bank, but defense and media officials have agreed yet again that everything should be done to respect the public’s right not to know.

A document obtained by Haaretz details a series of incidents that have been kept confidential. Defense officials are content that the information has been kept secret for so long and that the leak of a few details on social media hasn’t caused a fuss. The officials clearly appreciate reporters’ responsibility and restraint on the issue – they haven’t exploited the right of freedom of information.

The following are the incidents in the secret document – all of them in the West Bank in September and October.

Sept. 11: 500 trees burned on land belonging to the village of Deir al-Khatab.

Sept. 15: 17 olive trees chopped down on land belonging to the village of Kafr Laqif.

Sept. 17: 18 olive trees chopped down on land belonging to the village of Kafr Laqif.

Oct. 2: Serious damage to about 30 olive trees in the village of Jitt.

Oct. 3: 48 olive trees of the Shatat family chopped down.

Oct. 5: Serious damage to 130 olive trees of the Fukha family.

Oct. 5: 15 olive trees chopped down and olives stolen in the village of Deir Sharaf.

Oct. 7: Serious damage to about 60 olive trees and olives stolen in the village of Jitt.

Oct. 7: Serious damage to eight olive trees on land belonging to the village of Ras Karkar.

Oct. 7: 35 olive trees in the village of Far’ata chopped down and about a quarter of the olive crop stolen.

Oct. 13-14: Olive trees and grapevines vandalized in the village of Far’ata.

Oct. 20: Jewish Israelis from the settlement of Yitzhar attacked Palestinian farmers who, with the help of volunteers from Rabbis for Human Rights, had been harvesting olives. The attackers used iron rods, clubs and stones. Two farmers and two volunteers – a 71-year-old man and an 18-year-old woman – were injured.

The common denominator (and this is not a complete list) is that all these incidents took place in areas of the West Bank where the Israel Defense Forces has full security responsibility. They happened near Israeli settlements and their offspring, the outposts, all of which are well guarded by batteries of soldiers, cameras and watchtowers at Elon Moreh, Karnei Shomron, Kedumim, Ma’on and the Ma’on Farm, Sussia, Shavei Shomron, Zayit Ra’anan, the Gilad Farm, Shiloh and Yitzhar.

A page in the commanders’ diary

Another common element: These incidents were perpetrated in the same places as similar previous incidents. And in many of the Palestinian villages, the IDF, which does not rein in the serial perpetrators, denies the Palestinians, the potential victims of such attacks, access to their land except for twice a year, when they are allowed in under military escort. Therefore, apart from the list’s last item, the date provided isn’t the date on which the attack took place. It’s the date when the vandalism was discovered.

A letter from Rabbis for Human Rights and the Yesh Din human rights group details these incidents through October 7. The letter was sent on October 9 to the commanders of the IDF brigades in the West Bank – colonels Avi Balut, Yossi Pinto, Ran Kahane and Yoav Marom – as well as to the legal adviser to the West Bank division, Doron Ben-Barak. The letter accuses the commanders of failing to fulfill their obligation to protect the Palestinian farmers and their property. The IDF Spokesman’s Office said it would respond directly to the letter’s authors, not to the media.

Some of the commanders who are due to finish their service soon will have copied the confidential information into their personal diaries, which must be full of similar confidential information from previous years. Shortly after they take off their uniforms, they’ll tell the cameras that they always were concerned that these unreported attacks would ultimately trigger an explosion. When they’re asked why they didn’t say this during their service, they’ll cite the cognitive dissonance between the oath they took as soldiers and social-historical truth and common sense.

Their oath as soldiers was to protect Jewish citizens of Israel wherever and whatever the circumstances. Their oath as commanders was also to protect Israeli soldiers wherever and whatever the circumstances. But social-historical truth and common sense attest that violence by Jewish Israeli citizens invites a response and additional violence. Social-historical truth also proves that those in uniform who dominate a population that did not elect them as their rulers are violent in their mere presence, even when they aren’t killing or injuring, even when it’s only serial armed robbery of land and the protection of robbers.

In retirement, the army commanders will say that their oath overrode common sense, requiring them to nullify the Jewish violence with the best postmodern tools that have been developed in the IDF’s consciousness-engineering laboratories.

Meanwhile, in a secret meeting that might have taken place, defense and media officials might have agreed that the grove attacks can’t be defined as a quiet – or noisy – escalation because the attacks have been happening for years at more or less the same frequency and intensity. They might have agreed that as long as these attacks aren’t spoken about on our side, they don’t exist and other events have nothing to do with them. The officials must have decided that everything should be done to respect the public’s desire not to know.

Trees wrecked in the olive grove of Jalud, October 2013. Photo by Guy / Taayush