See also review of Judith Butler and Peter Beinart in Israel’s Moral Peril by By Alan Wolfe:
The American tide turns as support for Israel’s stance ebbs away 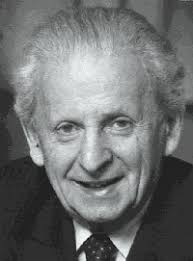 Emmanuel Levinas, Lithunian/French Jewish philosopher of ‘the Other’, one of Butler’s non-Zionist pantheon of Jewish thinkers

In attempting to make a case for a specifically Jewish critique of Israeli state violence, Berkeley professor Judith Butler argues that even at its most liberal, Zionism is profoundly un-Jewish.

Judith Butler has rightly been described as an academic superstar. She is one of the most quoted scholars in the humanities, and has also acquired fame − or notoriety, depending on one’s viewpoint − as a political activist. She has been highly critical of Israel’s occupation policy, describes herself as an anti-Zionist, and endorses the BDS movement, which advocates boycotting and divesting fromIsraeland imposing sanctions against it.

“Parting Ways” must be read as an integral part of Butler’s larger oeuvre. Her most famous book is “Gender Trouble,” in which she argues that gender is socially constructed rather than a natural given, a project that she has continued to pursue in, among other works, “Bodies that Matter” ‏(1993‏).Butler’s lifelong agenda has been to loosen the straitjackets by which society forms and enforces conceptions of gender that lock all too many into categories that limit their lives unbearably.

This is a radical form of a widely held political and ethical position. Reflective individualism’s starting point is that every individual human being belongs to many groups; a French-born straight Catholic man who loves Italian cuisine and Bob Dylan belongs to the category of Catholics as well as those of heterosexuals, natives of France, Bob Dylan lovers, etc.

The ethical claim of this position is that every individual has the right to determine the weight of each of these groupings in his or her life. Furthermore, reflective individualism denies the right of any collective to monopolize any of these categories, whether it be gender, nationality, religion or sexual orientation. For example, it argues that no conception of femininity should force a woman to put motherhood at the center of her life, if she chooses otherwise.

In “Parting Ways,” Butler applies this ethical demand for individual autonomy to Jewish identity. She joins a large number of contemporary Jewish intellectuals who refuse to accept the notion that one’s relation to Israel determines one’s Jewishness and that being critical of Israel turns one into a self-hating Jew − or worse, an anti-Semite.

But she goes one step further: She argues that Zionism itself is profoundly un-Jewish. Defending liberal versions of Zionism cannot salvage Jewish values as she understands them. Nothing less than a radical decoupling of Jewishness and Zionism will do for Butler, starting with the binary opposition between Israel and the Diaspora posited by classical Zionism, which valorizes the former and disparages the latter.

Contemporary political Zionism, in Butler’s view, has constructed a very slanted narrative of Jewish history − one that glorifies the kingdom of David, the Maccabees, Masada and Bar Kochba, all equated with the type of  bellicose masculinity embraced by some early Zionist activists like Max Nordau, Arthur Ruppin and Vladimir ‏(Ze’ev‏) Jabotinsky and pursued by Israeli leaders like Ariel Sharon and Benjamin Netanyahu. It depicts the identity of the downtrodden, servile, frightened and humiliated Diaspora Jew as one to be repressed and forgotten, so as to allow for the revival of the proud Zionist/Israeli Jew who participates in history. Butlerdoes not accept this narrative, and claims that it pushed Israelinto the indefensible policies of the last 45 years.

“Parting Ways” is Butler’s version of a non-Zionist counter-narrative, with her own pantheon of Jewish voices: French-Lithuanian philosopher Emmanuel Levinas; Berlin-born Walter Benjamin, proponent of a non-violent form of historical messianism; German-American political thinker Hannah Arendt; and Italian writer Primo Levi. She harnesses them for the project of a Nietzschean reevaluation of all Jewish values. Diasporic existence is not second-rate, she argues; it is an ethically more developed position than one contingent upon territorial and political sovereignty, because sovereignty almost inevitably impairs one’s ability to recognize the needs and rights of the other − a central concept of Levinas’ philosophy.

Butler mobilizes Arendt for a powerful critique of the ethnically unitary state: Plurality, Arendt argued, is a fundamental given of human existence. Constructing a nation-state, however, invariably means that the dominant group reserves the option of saying that it does not want to live with certain others: Gypsies, gays, Jews − or, in Israel’s case, Arabs. The rejection of plurality in favor of homogeneity, at worst, leads to the Nazi project of exterminating those you do not want, or to the project of ethnic cleansing that the late Serbian president Slobodan Milosevic revived for a greater Serbia. Butler expressly rejects making a direct comparison of Israel to Nazi Germany, but concludes that Zionism’s core value of Israel as a Jewish state invariably leads to injustice toward minorities, particularly, of course, Palestinians.

This, of course, leaves Butler open to the objection that Jewish history is unique in that the perpetrators of the Holocaust tried to annihilate the Jews, makingIsrael, the Jewish state in which Jews finally have the capacity to defend themselves, an existential imperative. To counter this argument Butler musters the moral authority of Primo Levi, who survived Auschwitz and made it his life’s project to restore humanist values after the hell of the Holocaust. Levi was an outspoken critic of Israel’s occupation policy and the first Lebanon war, and opposed invoking the memory of the Holocaust to justify such abuse of power.

While accessible, compared to most of Butler’s work, “Parting Ways” suffers from one crucial flaw: Butler engages lovingly with the minutiae of the thought of her beloved thinkers, primarily Benjamin, Arendt, Levinas and Levi, but she does not engage with the second topic of her book − Zionism − at all. Judging from “Parting Ways,” you might think that Zionism was a unitary ideology run by some politburo. At no point would you recognize how complex the history of Zionism is, and how different its various shades can be. You would not guess that there are committed liberal Zionists who argue for a secular constitution for Israel that would give full equality to Arabs and lead to a complete separation of religion and state. Quite remarkably,Butler, whose life’s work is about nuances, unquestioningly accepts simplistic premises about Zionism dictated, on the one hand, by Arab rejectionists who define Zionism as racism, and, on the other, by Israel’s right-wing ideologues.

Does “Parting Ways” succeed in delineating a tradition of Jewish criticism ofIsrael’s policies? I think that a case for a specifically Jewish critique can be made, but thatButler’s attempt to construct such a critique primarily by way of an intense debate with just four Jewish thinkers is not convincing, even if I personally happen to cherish the ideas of Arendt, Benjamin, Levi and Levinas.Butler’s argument requires a fleshed-out portrayal of Jewish tradition that offers greater historical depth than she provides.

Such a portrayal could, for example, describe a tradition that historian of Marxism Isaac Deutscher called non-Jewish Jews. He claimed that there is a tradition of Jewish thinkers who did not adhere to Judaism in any way, and yet were distinctly Jewish in their contrarian, critical cast of mind. Such a history could cover Spinoza, Heine and Freud ‏(who figures in “Parting Ways” obliquely via Edward Said‏); Arthur Schnitzler and Albert Einstein; Philip Roth, Steven Spielberg, Danny Cohn-Bendit and Tony Kushner, in addition to Arendt, Benjamin and Levi ‏(Levinas would not fit into this category‏). Such an account would have to give a convincing argument for a specifically Jewish form of modern contrarian thought and cultural production.

Daniel Boyarin, a historian of religion at the University of California,Berkeley, where Butler heads the critical theory program, has done exactly this for a different tradition: Talmudic thought. He has presented a conception of Jewishness with explicit reference to Butler’s approach to gender by portraying the “soft,” “feminine” Jewish man as a cultural ideal. He has also argued against seeing Judaism and Christianity as two mutually exclusive sides of a dichotomy. Boyarin makes rich use of Jewish sources, ranging from the Bible to rabbinical tradition from the Talmud onwards, and connects them to Jewish modernists and postmodernists. He presents a strong case for a viable counter-narrative that could claim deeper ownership of Jewish history than the Zionist conception, which largely represses, or at least devalues, millennia of diasporic Jewish past. Boyarin asserts and demarcates his own Yiddishkeit, a softhearted Jewish identity, in opposition to Zionism − or at least in opposition to the form it has taken inIsrael’s policies since 1967.

Finally, a word about the timeliness of Butler’s “Parting Ways”: While her argument will appeal primarily to readers steeped in contemporary humanities, her book is symptomatic of a crucial juncture in Jewish history. Many Jews in the Diaspora, including liberals less left-leaning thanButler, feel that, rather than strengthening their Jewish identity, Israel forces them to define their Jewish identity in terms of opposition to the country’s policy of occupation.

These Diaspora Jews are afraid that the liberal Zionism of Theodor Herzl and Ahad Ha’am is dying, because Israel’s elected governments have led it to the point where the gradual de facto annexation of the West Bank is bound to end the dream of Israel as the democratic homeland of the Jews. Bereft of a politically viable strategy, many Jewish liberals are left with the rueful argument that the Zionist experiment could have led to a different result.

This sort of despair is beginning to spread into Israel, where many progressives − politically marginalized, powerless and under growing pressure by the anti-liberal measures promoted in the Knesset − are beginning to feel as if they are in exile in their own country. Foreign Minister Avigdor Lieberman’s ethnocratic attempts to define Israeliness by totalitarian demands for unquestioned loyalty put a growing strain on the progressives’ Israeli core identity.

As a consequence Israeli liberals might want to return to some form of Jewishness as a core identity. This would require defining a Jewish cultural identity radically different from that imposed by the stranglehold of Israel’s Orthodox establishment on state-defined Judaism. Most of them will require accounts of Jewishness richer than Butler’s, and they might look for possible models in Boyarin’s work, or in Udi Aloni’s 2011 exploration of non-Zionist Jewish identity in his whimsical and wide-ranging book “What Does a Jew Want?” to which Butler contributed.

These Israeli progressives who feel politically disenfranchised might come to agree with Butler, Boyarin and Aloni that such new, non-Zionist conceptions of Jewishness must indeed move beyond the dichotomy between Zion and Diaspora. They might argue that Jewishness as they understand it sees Diaspora as a source of ethical inspiration rather than of shame. A new Jewish identity might emerge that connects Tel Aviv with New York’s Upper West Side, Berlin, Paris, London and Buenos Aires − and all of them on an equal footing. This old/new type of Jew could well come to the conclusion that Jewishness is inherently diasporic, by virtue of preferring humaneness over power, and recognition of the other over sovereignty no matter where one lives.

Carlo Strenger, a philosopher and psychoanalyst, is a professor in the School of Psychological Sciences of Tel Aviv University, and is on the scientific board of the Sigmund Freud Foundation,Vienna.