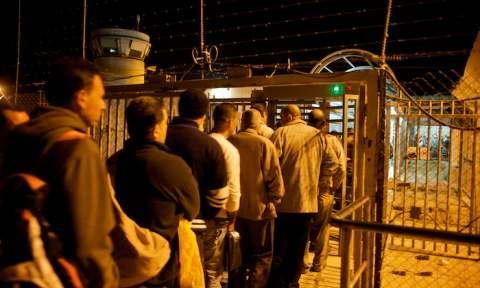 “We will not rest, until you divest.”

On May 15, students at Middlebury College in Vermont staged a checkpoint outside their dining hall during the busiest meal of the year to commemorate the 65th anniversary of the ethnic cleansing of Palestine, which led to the establishment of the state of Israel.

As the Middlebury divestment campaign from arms and fossil fuels gains national attention, a coalition that included Palestinian, Israeli and American Jewish students staged the act of political theater in solidarity with Nakba Day demonstrations around the globe as a call to add apartheid to the students’ divestment demands.

Israel receives over $3 billion a year in military aid from the United States with stipulations on how that money is to be spent. As a consequence, nearly all weapons used by the Israeli military to support the occupation are produced by U.S. arms manufacturers, in which Middlebury has $6 million invested.

The objective of the checkpoint was to urge the college to honor the call by Palestinian civil society for those who are invested in corporations that profit from the occupation to stop their complicity in the oppression of the Palestinian people and fulfill their “moral responsibility to fight injustice” by divesting from Israeli apartheid.

At a midnight breakfast event during finals week, students were greeted in the dark with barricades blocking the entrance to the dining hall and flashlights from full uniformed soldiers asking for identification cards.

Alex Jackman, a junior from New York City, described the checkpoint as “one of the coolest pieces of theater I have seen on Middlebury’s campus. Performed during the time when all students are wrapped up in stress about exams and schoolwork, the piece served as a reminder that there are greater battles to fight beyond our campus.”

A gate was lifted for students who had received Israeli documentation. They could pass freely to prepare themselves a plate of pancakes. Those with Palestinian IDs were not greeted with a welcoming tone. As their “Israeli” friends were able to pass through, “Palestinians” were ordered by soldiers to stop.

While they were held, three actors whose wrists were zip-tied and eyes blindfolded — alluding to the hundreds of Palestinians held under administrative detention without being charged or tried — pleaded for water and demanded to be released. Those with Palestinian papers were only able to eventually pass into the dining hall after being directed to walk all the way around the checkpoint.

Some students voiced their frustration with being held up, “This is not cool, I am trying to get to midnight breakfast.” One shouted, “I have to study for finals.”

Jackman contended it was important for students to confront the checkpoint. “Middlebury College students tend to abstract issues of social injustice, a method that allows us to remove ourselves from these issues,” she explained. “But by being confronted, quite literally, with this piece of theater, we were not able to remove ourselves from our privileges — even if only for a moment.”

The performance, developed by students as part of a course on Theater and Social Change and members of the organization Justice for Palestine, was broken up by campus public safety.

“This is not theater; we can tell it is political,” one officer voiced. “Everything that is political has to be approved by the college.”

For Palestinians, checkpoints are not a momentary interruption, but one persistent piece of a dehumanizing system of apartheid. Between 2000 and 2005 there were 67 Palestinian mothers who were forced to give birth at Israeli military checkpoints and 36 of those babies died.

Apartheid is not enabled through merely subjecting a people to oppressive conditions, but rather through creating separate realities whereby a group of people is not forced to confront their implication in the domination of another group.

Middlebury College itself is a settlement on stolen Abenaki land. With its pristine limestone buildings and perfectly manicured grass, Middlebury manufactures an environment seemingly separate from the oppressions it perpetuates, which is itself a political act.

Students at Middlebury are stepping up and refusing to allow a separation of conscience that tolerates inaction in the face of a school profiting from Israeli apartheid. Justice for Palestine has one message for administrators, particularly fitting of a midnight action, “We will not rest, until you divest.”

Other such occasions for authors are full of talk and chatter – here, we authors have reason to be a little more reticent

At PalFest, a literary festival in the West Bank, I knew we’d have to pass through Israeli checkpoints. What I hadn’t expected was what the checkpoints would feel like. As foreigners we could have gone through on our bus. But PalFest wants writers to experience what it’s like for ordinary Palestinians. And so it was that we found ourselves walking, single file, down narrow cages towards turnstiles.

In theory it might have been funny to watch writers struggling with their luggage – China Miéville trying a backward twist, or Tom Warner having to hoist his suitcase high above his head – but in reality it was humiliating. And that, I guess, is the point of the narrow corridor and the undersized turnstiles. The message – to us and the people who do this daily – is don’t come back again.

As in most literary festivals we give readings – mine was in a beautiful garden in Ramallah accompanied by three musicians, whose haunting improvisations joined the pain of the old South Africa to the contemporary West Bank – and workshops. The rest of our time is spent not as per festival routine, in green rooms or shops, but listening to stories. And so it was that we visited Munther Fahmi’s bookshop in east Jerusalem’s American Colony Hotel.

Fahmi recently managed to overturn an Israeli court’s judgment that he was not entitled to residency in Jerusalem. He’s on probation now and unable to travel without permission, which came too late this year for the London Book Fair. “They’re lousy losers,” he says, “so they gave me a visa days after the fair had ended.” Asked why, given all the difficulties he faces, he doesn’t leave, he says simply: “I was born here. This is my country. You have to stay where you belong.”

Fahmi’s case was won with international help. Fatima Salim is not so lucky. Although her family have lived in the same house in the Sheikh Jarrah district of east Jerusalem for generations, a right-of-return law that applies only to Israeli citizens means she has been given an order to vacate. She has already lost the land that adjoined her property. Now she stands outside a house that is deteriorating because she is forbidden to fix it, and tells her story, her tears only leaking out at the end. All we writers we can do is be witness to this dignified old woman telling us that it might be better to be on the streets than to see her children persecuted because of where they live.

At most lit fests writers are there to be listened to. In this one, we are made silent by the pain of all we hear.