Cancer punishes those who support Palestinians

This posting has 4 items:
1) JTA: Jimmy Carter’s cancer is God’s punishment for his behaviour toward Jews;
2) Jewish Press: Note to Former Pres. Jimmy Carter: PLEASE Boycott Israeli Products & Technology, Jimmy Carter obviously supports boycotting Israel (no evidence needed or provided) so he should not use any medical products for which Israel is justly famous;
3) Guardian: Jimmy Carter calls situation in Gaza ‘intolerable’ eight months after war, obviously still an antisemite as an honoured Elder;
4) WSJ: Jimmy Carter’s Book: A Palestinian View, Ali Abuminah, in 2006, reviews the book on which charges of antisemitism were first based;

Menachem Begin, Jimmy Carter and Anwar Sadat at Camp David, 1978 where they negotiated the Camp David Accords which were ratified the following year as the Egypt Israel peace treaty.

Former president recently announced he has cancer that has spread to his brain.

Former president Jimmy Carter, 90, recently announced he has cancer that has spread to his brain.

For some Jews (and evangelical Christians), the cause apparently is obvious. No, it’s not his genetic makeup, or the spread of a mass from his liver to his brain. It’s divine punishment for his behaviour toward the Jews.

Not so fast, writes Rabbi Benjamin Blech on Aish.com, the website of Orthodox Jewish outreach organization Aish HaTorah: “Don’t presume to know that his illness is a result of his antisemitic views.”

Blech, an Orthodox Jewish author and professor of Talmud of at Yeshiva University, writes:

There are those already proclaiming with prophetic certainty that Jimmy Carter is being punished by God for his sins against Israel and the Jewish people. Carter’s cancer is the divine edict for his anti-Semitism. And with that smug analysis of heavenly justice these false prophets have unwittingly besmirched millions of righteous and God-fearing people who similarly find themselves suffering from incurable diseases and facing painful deaths.

Carter is not the only one dying from cancer. People in my own family were victims; pious and holy individuals I knew personally were targets of agonizing final ailments. But the Torah taught us not to dare make judgments based on equating someone’s suffering with sin and be guilty of the crime of the friends of Job.

One can only guess how those who believe Jimmy Carter’s cancer is divine retribution are explaining the 90-plus years he has lived in relatively good health, trotting around the globe, selling books and maintaining a position of great influence. 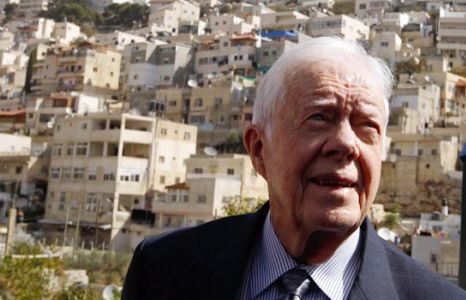 I am Jewish, and therefore forbidden by my faith to rejoice in someone’s misfortune, even for individuals like Jimmy Carter, the worse [sic] president in the history of our beloved country. This peanut-grower sold his rotten soul to the enemies of the United States and Israel, Carter is an avowed antisemite who has no love for me or my people.

By my own admission, I’m a fair man who hates no one (although I may dislike some people) but I will take this opportunity to remind the cancer-stricken Carter to follow through with the boycott of Israeli products. He should refuse to be treated with any of the lifesaving medication that was discovered by Jews, or medical technology that was researched and developed by Jews – in Israel or any other place.

An unsolicited piece of advice!

Mr. Carter you must be treated only with lifesaving products discovered by your soul buddies, the Palestinians and other Arab scientists

What say you Mr. Carter? 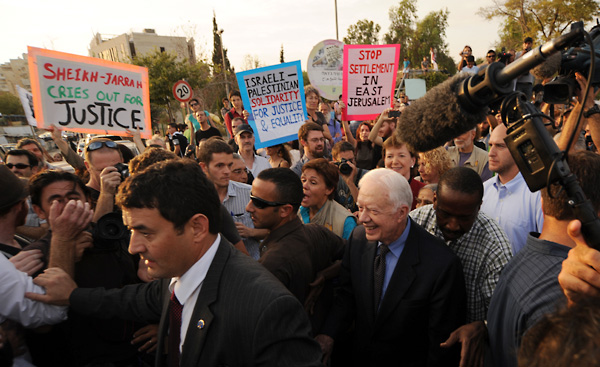 Jimmy Carter and fellow Elders join a protest in East Jerusalem, October 2010. Photo from The Elders.

Former US president, in Jerusalem with former Norwegian prime minister, says residents ‘cannot live with the respect and dignity they deserve’

Former US president, in Jerusalem with former Norwegian prime minister, says residents ‘cannot live with the respect and dignity they deserve’

Former US president Jimmy Carter said on Saturday that eight months after a bloody war in the Gaza Strip the situation there remains “intolerable”.

Carter and his delegation were supposed to visit the isolated territory but earlier this week called it off, citing unspecified security concerns. Speaking to reporters in Jerusalem, Carter said he was still determined to work for a Palestinian state in the West Bank and Gaza.

“What we have seen and heard only strengthens our determination to work for peace,” he said. “The situation in Gaza is intolerable. Eight months after a devastating war, not one destroyed house has been rebuilt and people cannot live with the respect and dignity they deserve.”

More than 2,000 Palestinians were killed in the 50-day summer war between Israeli forces and Hamas militants who fired rockets into Israel.

Earlier in the day, Carter, 90, visited Palestinian president Mahmoud Abbas in Ramallah and laid a wreath on the grave of former leader Yasser Arafat.

Carter was accompanied by Gro Harlem Brundtland, a former prime minister of Norway and fellow member of his Elders group. 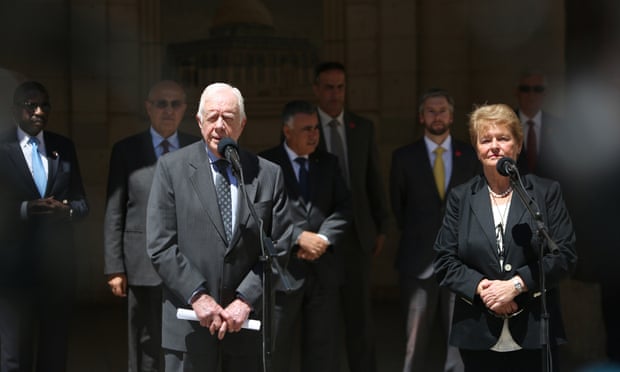 Former US president Jimmy Carter and former prime minister of Norway Gro Harlem Brundtland, both members of the Elders group of retired prominent world figures, address journalists on 2 May, 2015 after their meeting with the Palestinian president in the West Bank city of Ramallah. Photo by Abbas Momani/AFP/Getty Images

But Carter was shunned by Israeli leaders who long have considered him hostile to the Jewish state.

Although he brokered the first Israeli-Arab peace treaty during his presidency, Carter outraged many Israelis with his 2006 book Palestine: Peace Not Apartheid. He has also repeatedly reached out to Gaza’s Islamic Hamas leaders, considered terrorists by much of the west.

Carter did meet with a group of Israelis living in towns bordering Gaza and heard about life under the threat of rocket attacks and militant infiltrations from Gaza. But he said that he had no interest in meeting Prime Minister Benjamin Netanyahu, who has ignored him in the past.

“This time we decided it was a waste of time to ask,” Carter said. “As long as he is in charge, there will be no two-state solution and therefore no Palestinian state.” President Carter has done what  few American politicians have  dared to do: speak frankly about  the Israel-Palestine conflict. He  has done this nation, and the  cause of peace, an enormous  service by focusing attention on  what he calls “the abominable  oppression and persecution in  the occupied Palestinian  territories, with a rigid system of  required passes and strict  segregation between Palestine’s  citizens and Jewish settlers in the  West Bank.”

The 39th president of the United States, the most successful Arab-Israeli peace negotiator to date, has braved a storm of criticism, including the insinuation from the pro-Israel Anti-Defamation League that his arguments are antisemitic.

Mr. Carter has tried to mollify critics by suggesting that his is not a commentary on Israeli policy inside Israel’s own borders, as compared with the West Bank, Gaza Strip and East Jerusalem — territories Israel occupied in 1967. He told NPR,

I know that Israel is a wonderful democracy with equal treatment of all citizens whether Arab or Jew. And so I very carefully avoided talking about anything inside Israel.

Given the pressure he has faced, it may be understandable that Mr. Carter says this, but he is wrong. In addition to nearly four million Palestinians living under Israeli rule in the occupied territories, another one million live inside Israel’s pre-1967 borders. These Palestinians are descendants of those who were not forced out or did not flee when Israel was created in 1948.

They have nominal Israeli citizenship, and unlike blacks in apartheid South Africa, they do vote for the country’s parliament. Yet this is where any sense of equality ends. In Israel’s history, no Arab-led party has ever been asked to join a coalition government. And, among scores of Jewish ministers, there has only ever been one Arab minister, of junior rank.

Discrimination against non-Jewish citizens both informal and legalized is systematic. Non-Jewish children attend separate schools and live in areas that receive a fraction of the funding of their Jewish counterparts. The results can be seen in the much poorer educational attainment, economic, health and life outcomes of Palestinian citizens of Israel. Much of the land of the country, controlled by the quasi-governmental Jewish National Fund, cannot be leased or sold to non-Jews. This is similar in effect to the restrictive covenants that in many U.S. cities once kept nonwhites out of certain neighborhoods.

A 2003 law stipulates that an Israeli citizen may bring a non-citizen spouse to live in Israel from anywhere in the world, excluding a Palestinian from the occupied territories. A civil rights leader in Israel likened it to the American anti-miscegenation measures from the 1950s, when mixed race couples had to leave the state of Virginia to marry legally.

For Palestinians, the most blatant form of discrimination is Israel’s “Law of Return,” that allows a Jewish person from any country to settle in Israel. Meanwhile, family members of Palestinian citizens of Israel, living in exile, sometimes in refugee camps just a few miles outside Israel’s borders, are not permitted to set foot in the country.

The rise of Avigdor Lieberman, the new deputy prime minister, who openly advocates stripping Palestinians in Israel of citizenship and transferring them outside the state, reflects increasingly extremist politics. In response to growing discrimination, leaders of Palestinians inside Israel recently issued a report, “The Future Vision of the Palestinian Arabs in Israel.” It calls for Israel to become a state where all citizens and communities have equal rights, regardless of religion. Many Israeli commentators reacted angrily, calling the initiative an attempt to dismantle Israel as a “Jewish state.” However, even if Mr. Carter’s recommendations are implemented, and Israel withdraws from the territories occupied in 1967, the struggle over the legitimacy of a state that privileges one ethno-religious group at the expense of another will not disappear.

As other divided societies, like South Africa, Northern Ireland and indeed our own are painfully learning, only equal rights and esteem for all the people, in the diversity of their identities, can bring lasting peace. This is an even harder discussion than the one President Carter has courageously launched, but ultimately it is one we must confront if peace is to come to Israel-Palestine.