Campaign for apology from UK for Balfour declaration: UPDATED 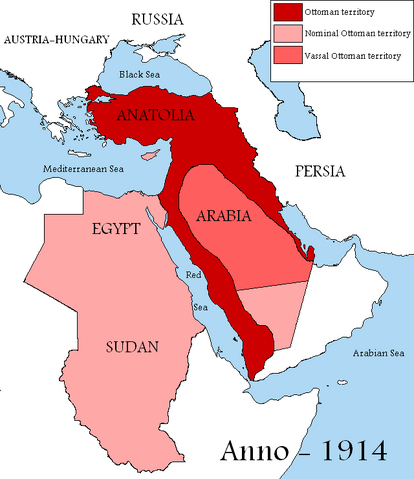 Ottoman empire in 1914, before its defeat in the first world war. The dark red is Ottoman territory, the pinks are nominal Ottoman land.

LONDON, – The Palestinian Return Center (PRC) has launched an international campaign that targets collecting one million signatures asking Britain to apologize to the Palestinian people.

The London-based PRC statement on Monday said that Britain should apologize for its historic mistake starting with the Balfour Declaration and for the human rights abuse suffered by Palestinians while under British Mandate.

It said, “International Campaign, “Britain, It’s Time To Apologize” …1917-2017…A Century Of Palestinian Suffering It’s nearly 100 years since the UK Foreign Secretary, Arthur James Balfour, pronounced the Balfour Declaration, on 2nd November 1917, promising a homeland for the Jews in Palestine. Ever since, Palestinians have suffered tremendously under the shadow of Britain’s colonial past.”

The statement then read:
“Justice was rendered over Britain’s colonial past in the Mau Mau case. The world heard what every subjugated people knew, Britain committed brutal crimes against indigenous populations.

The Palestinian Return Centre (PRC), with other partners around the world, is preparing to launch their global campaign to mark the centenary of the Balfour Declaration.

The campaign, which will be launched in the UK, will gather a million signatures from those seeking justice in Palestine, in condemnation of British colonial policy between 1917-1948.

Over 11 million Palestinians continue to suffer from the unjust and misguided British policy in Palestine.

The five year campaign will include mass mobilization, popular events, conferences and workshops, lobbying, petition and many other initiatives.

Great injustice leaves great scars, it is time Britain apologized to rebuild for the future.

Since Britain has shown it’s capable of taking responsibility for its past atrocities, we are optimistic in achieving our goal.”

The ‘Balfour Declaration’ was contained in a letter from Foreign Secretary Arthur Balfour to Baron Rothschild in November 1917. The context was the first world war, 1914-18, when Britain was at war with the Ottoman Empire which had sided with Germany in the conflict.

Former government member, Herbert Samuel (a non-religious Jew) had advocated incorporating Palestine into the British Empire – an idea favoured by Theodor Herzl who for some time believed the best hope of establishing a safe homeland for Jews, at a time of violent pogroms in eastern Europe, lay within the protection of the British empire. Pragmatists in the British establishment were primarily concerned with limiting the support for Germany amongst the Arabs of the region, cultivating support amongst Jews throughout Europe and in protecting the Suez canal, Britain’s primary trade route with India and China.

The declaration would have been merely sentimental had not the secret Sykes-Picot agreement, 1916,  allocated the Arab lands between France, Britain and Russia, followed by the  League of Nations award of  the mandate to govern the southern Ottoman empire to the UK in 1922.  The mandate lasted until 1948.]

I have much pleasure in conveying to you. on behalf of His Majesty’s Government, the following declaration of sympathy with Jewish Zionist aspirations which has been submitted to, and approved by, the Cabinet:

His Majesty’s Government view with favour the establishment in Palestine of a national home for the Jewish people, and will use their best endeavours to facilitate the achievement of this object, it being clearly understood that nothing shall be done which may prejudice the civil and religious rights of existing non-Jewish communities in Palestine, or the rights and political status enjoyed by Jews in any other country.

I should be grateful if you would bring this declaration to the knowledge of the Zionist Federation.

Marking the centenary of the Balfour Declaration in 2017, as a contribution to justice, peace and reconciliation in the Middle East.

Mindful of Britain’s responsibility, the Balfour Project will encourage understanding of what led to the Balfour Declaration, and what flowed from it.

The Balfour Project will facilitate a network of educational, political, religious and humanitarian groups who share this vision.

The Balfour Project network hopes to produce a wide range of multimedia resources suitable for children and adults, and promote a series of international conferences and cultural exchanges to enable participants to engage with empathy those who have been negatively impacted by the Balfour Declaration.

The Balfour Project seeks to contribute to justice, peace and reconciliation in the Middle East, and in particular the resolution of conflict between Israelis and Palestinians.

For more information and to find out more about the project, please email us atinfo@balfourproject.org.

Space in the hall is limited, 4 places still available at 24 Oct.

The Balfour Project, in association with the Church of Scotland, is organising a one-day conference on the British involvement in Palestine in the first half of the last century. This is a first step in exploring how to mark the centenary of the Balfour Declaration in exactly five years on 2nd November 2017.

The Balfour Project has been created by a group of academics and activists who believe that this anniversary should not pass unremarked. Mindful of Britain’s responsibility for what has come to pass in the Middle East, the Balfour Project will encourage understanding of what led to the Balfour Declaration, and what flowed from it. Through our website, we plan to facilitate a network of educational, political, religious and humanitarian groups who share this conviction. We aim to stimulate conferences, cultural exchanges and the production of multimedia resources. Above all, we believe that the search for the truth of what took place, and the acknowledgement of wrong-doing, can contribute to justice, peace and reconciliation in the Middle East.

In the morning Dr Mary Embleton, whose special interest is Britain’s involvement in the Middle East, will outline the contradictory promises Britain made to Arabs and Jews, and their consequences for all parties before and during the British Mandate in Palestine. This will be followed by keynote papers from Rev Dr Stephen Sizer, who will talk about the ideas that shaped this period, Professor Mary Grey will talk about the main players and Dr Imad Karam will talk about the consequences for Palestinians today. In the afternoon John Bond OAM, former Secretary of Australia’s Sorry Day campaign, will use the 2008 national apology to Aboriginal Australians to discuss the impact of acknowledgement and apology.

This will be followed by workshops where you can both interact further with the main speakers and pool ideas on how we move forward. How can we create a momentum over the next 5 years towards an acknowledgement of our responsibilities? Can there be a cascade of events, not centrally organised, but all working to the same ends?

Registration is £20 which includes lunch and refreshments. Space is limited so please book your place on the attached registration form. We hope you will find it an informative and stimulating day.

The Balfour Project is grateful for help from the Church of Scotland, Scottish Palestinian Forum, and Initiatives of Change, in money and gifts in kind, in organising this conference.