The government on Sunday officially ratified Israel’s normalization agreement with the United Arab Emirates, sealing a landmark treaty that is opening Israel to the Gulf and redrawing the contours of the Middle East.

The government also okayed a deal with Bahrain to establish ties and sent it to the Knesset for approval.

The so-called “Treaty of Peace, Diplomatic Relations, and Full Normalization Between the United Arab Emirates and the State of Israel,” which was signed on September 15 at the White House, will enter into force as soon as the government in Abu Dhabi ratifies the agreement as well. It is expected to do so by issuing a decree.

Once both parties have ratified the agreement, the treaty will be transmitted to the secretary-general of the United Nations for registration in the UN Treaty Series, a massive compendium of international treaties.

In parallel, Israeli and Emirati officials are currently negotiating various bilateral agreements, including about the opening of embassies and visa exemptions for visitors from both countries.

On October 15, the Knesset approved Israel’s normalization deal with the United Arab Emirates by an overwhelming majority, after nearly nine hours of at-times stormy debate, during which more than 100 ministers and MKs spoke.

Only 13 parliamentarians — all from the Arab-majority Joint List — voted against the agreement, criticizing it as a scheme to undermine the Palestinian people.

During Sunday’s weekly cabinet meeting, the ministers also voted to send Israel’s normalization agreement with Bahrain for approval to the Knesset. 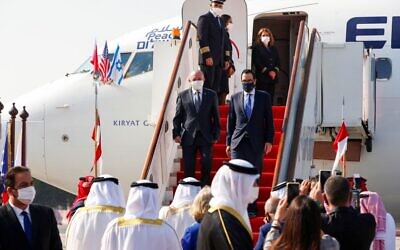 National Security Adviser Meir Ben-Shabbat (L) and US Treasury Secretary Steve Mnuchin disembark from a plane upon their arrival at the Bahraini International Airport on October 18, 2020. (Ronen Zvulun/Pool/AFP)

If a majority of lawmakers approve the “Joint Communiqué on the Establishment of Diplomatic, Peaceful and Friendly Relations,” as is widely expected, the agreement will return to the cabinet for final ratification.