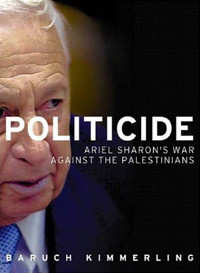 “Kimmerling, an Israeli sociologist and a specialist in Palestinian history, defines “politicide” as a process designed to eliminate Palestinian political existence. The implicit message of his book is that this goal has always been present in Israel’s confrontation with the Palestinians. For Kimmerling, Prime Minister Ariel Sharon embodies politicide in Israeli thought and action, from the 1948 war to the 1982 invasion of Lebanon and the virtual war against the Palestinian Authority carried out by Sharon since 2001. Politicide is by definition incompatible with a two-state solution and in its extreme form could lead to partial or total ethnic cleansing. It should be emphasized that Kimmerling’s little book on Israel’s “politicidal” temptation, although far from the mainstream of Israeli and U.S. thought, is insightful, informative, and, yes, judiciously balanced.”

“With media coverage so tightly focused on the diplomatic maneuvering surrounding President Bush’s Road Map peace initiative, it is easy to lose sight of the fact that Israel continues to implement a devastating set of policies that are endangering the social and national existence of the Palestinian people. In fact, Israel’s grudging participation in the Road Map process is little more than an effort to buy time for these policies to achieve this outcome. While this charge may sound like overheated political rhetoric, it is coming from no less a source than the eminent Israeli sociologist Baruch Kimmerling in his important new book Politicide: Ariel Sharon’s War Against the Palestinians (Verso, 2003).”

“Kimmerling, a self-described “Israeli patriot” deeply concerned about Israel’s future, coined the term politicide to describe the strategic goal of the package of policies Israel has implemented against Palestinians in the West Bank and Gaza Strip during the past few years, especially since Ariel Sharon’s ascension as Israel’s Prime Minister in February 2001. He believes that politicide is a danger not only to the existence of the Palestinian people but also to the state of Israel.”

“By politicide he means a multi-leveled process of Israeli political, economic and military policies “that has, as its ultimate goal, the dissolution of the Palestinian people’s existence as a legitimate social, political and economic entity.” It does so through the planned destruction of both the Palestinian public and private spheres of life in the West Bank and Gaza Strip.

“Its main policy components include the deliberate destruction of Palestinian national and civic institutions; the relentless siege of Palestinian cities and villages by barricades, checkpoints, and curfews; the physical destruction of civilian and economic infrastructure; mass arrests and assassinations of political leaders and activists; land confiscation; home demolitions; starvation and political isolation. This process may also but not necessarily entail their partial or complete ethnic cleansing from the West Bank and Gaza Strip.” (more…)