If you’re alert, you’re probably asking yourself: how can you report what the court decision was if it’s secret? For the answer, read on.

Earlier this week, the Israeli Supreme Court made its ruling in a case brought by Israeli human rights activists against Israeli arms sales to the Burmese military junta, which has ethnically cleansed 400,000 Rohingya Muslims in the past few months. But officially, we don’t know anything about the decision. The Court has placed a gag order on it so no Israeli journalist may report the result.

Regarding Israeli arms sales, a high level Burmese military delegation visited Israel in 2015 and signed major new arms purchases to reinforce the firepower it’s using to burn down villages and exterminate Muslims there. The junta’s Facebook page trumpeted these developments. 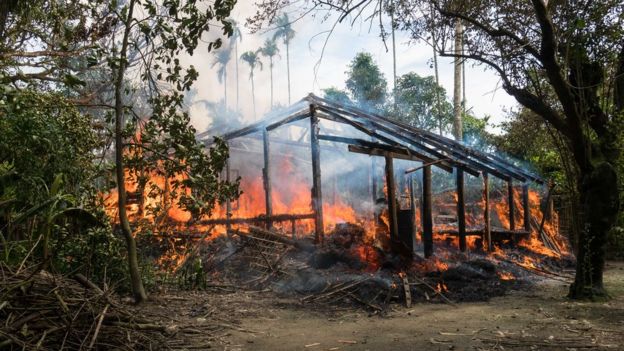 That’s when the human rights activists stepped in. A funny thing happened in the halls of Israeli justice when they challenged this death trade: first, the government and state attorney demanded the Court declare the entire case secret; including previously open and public hearings and news reports on the developments in the matter. They in essence, tried to lock the barn door after the horse escaped. Though the Court rejected that request, it did announce that its own ruling would be secret. This is unheard of in the annals of Israeli jurisprudence. I can’t recall any previous Court decision made in secret, especially on a matter of such national and international significance. Here are Facebook comments from Eitay Mack last week, the attorney who brought the case before the Court:

In a manner which suits dictatorial regimes, the Ministries of Defense and Foreign Affairs and the State Attorney have clandestinely filed an urgent ex-parte request, to retroactively classify the entire case as to Israeli sales of arms and training to Burma. This includes: the claims which have already been extensively published in Israel and all over the world; the very existence of current procedures in court; and also the contents of the open Supreme Court hearing which took place yesterday and has already been covered by the media. See more

The decision was rendered yesterday.  Probably almost every Israeli journalists knows how it ruled.  But they can’t report it.  But thankfully, the very activists who brought the case before the Court are a courageous and even defiant lot.  At a protest two days ago near the prime minister’s residence, Mack detailed the massive, sophisticated weapons shopping list Burma gave Israel.  Here’s a translation of his speech:

The State Attorney has not sent me the request and has not updated me as to its submission or the very intention of submitting it. I found out about this at 7 p.m. today when I received the court’s decision via fax.

We came here because we’ve had enough of officials in the Ministries of Defense and Foreign Affairs granting arms sale licenses to their friends, knowing that in a few years they may join them [in becoming arms dealers].

We came here because we’ve had enough of the fact that in almost any place where war crimes, crimes against humanity, and genocide were committed there was use of Israeli arms, Israeli training and Israeli expertise.

People who lived under the military juntas in Argentina and Chile saw Israel Galil rifles.

The pilots who flew arms to Rwanda during the genocide have testified on that…We have a tape about this.

People who were in Bosnia during the war, they saw shells with Israeli information on them.

And now we’re speaking of Burma.

Neither censorship nor gag orders can delete what has been published. While in Israel all is kept in secret, the head of the junta in Burma posted on his Facebook page, about his visit to Israel, to a navy base, an air force base, all the major military industries.

He wrote that he had signed arms and training deals with Israel that he had purchased from Israel, Super-Dvora MK3 ships. Battleships, which have also been used in Sri Lanka, for war crimes.

And last summer he posted that the head of the Israeli Security Exports Agency visited Burma, one of the most secretive people in Israel, yet the head of the junta posted his photo from the visit.

And later, an Israeli company, on whose board the former head of Israeli Police, Shlomo Aharonishki serves, published about sales to Burma of special CornerShot rifles and training, and posted photos of training in built-up areas

And after all this, when things are out in the open, and this information has not been published by leftists, who are easily mocked in Israel when what they reveal is inconvenient…The info has been published by those who are themselves involved in the deals.

This cannot go on. This must stop.

Today it’s Burma, tomorrow it’s Burundi.
This has been going on for several years in the South Sudanese civil war.

We mustn’t remain silent, this is being done in our name.
And as long as this goes on, we are responsible.

This is done in the name of Israeli citizens, and it’s also harming Jewish communities abroad, which are expected to defend Israel every day.

On that day the Supreme Court issued a gag order, and I got a court decision on Israeli arms sales to Burma.

They have no shame. The Burmese Ambassador to Israel is one of the international representatives who came to the Occupation ceremony.

How come no one was furious? How come people didn’t walk out?

Two things must happen here. The [Israeli] left must reject all the generals who speak of peace in our town squares, and then destroy peace clandestinely in other countries.

And the right must tell the Prime Minister: We don’t want supportive votes at the UN in exchange for providing arms used for genocide, rape, disappearance and the murder of children.

This must stop now.

Another speaker, Prof. Avshalom Elitzur, was the most eloquent and defiant in his remarks. In English, he explicitly confirmed that the Court had ruled against the complainants and in favor of the government. In other words, Israel’s most supreme judicial body permitted the nation’s arms industry to collaborate in ethnic-religious genocide. Israel’s High Court has been transformed from the days in which it championed human and civil rights under chief justice Aharon Barak to a rubber stamp of the worst Likudist-settler politics. It is not a supreme court but a debased court.

At a time when even the Trump administration’s UN ambassador is demanding the international body stop all arms trafficking with the Burmese, Israel is proud to sell its guys to the killers so they can kill even more Muslims. Recent news reports say that 500,000 Rohingyas have been driven from their homeland and that this is almost half of the entire population that lived in Burma prior to the ethnic cleansing.

Israel itself engaged in a similar bout during the 1948 Nakba against its indigenous Palestinian population, when 1-million were forcibly expelled. It continues to provide billions in weapons to nations like India engaged in occupation of Muslim territory in Kashmir. Israel is in the vanguard of nations engaged in a looming epic battle against Islam and the Muslim states of the world. It’s joined in this by governments which have been captured by this Islamophobic narrative, like Poland and Hungary; and by extremist neo-Nazi political parties and movements in France, Germany and England which have endorsed this religious crusade. This development should chill the hearts of Jews throughout the world who want no part in a religious holy war.

Returning to the Burma protest, Prof. Elitzur told me directly he was happy to defy the gag order and welcomed any attempt to hold him accountable for breaking it. This is the sort of courage that so many average Israelis, going about their everyday business, lack. We can only admire and support it.

Now that the news is public and published outside Israel (here), I hope pressure will build inside so that the media may defy the court order and/or the Court may set aside this ridiculous, counter-productive ruling and admit what it has done and face the consequences.

An excellent article [below] by an Israeli genocide researcher on this subject. 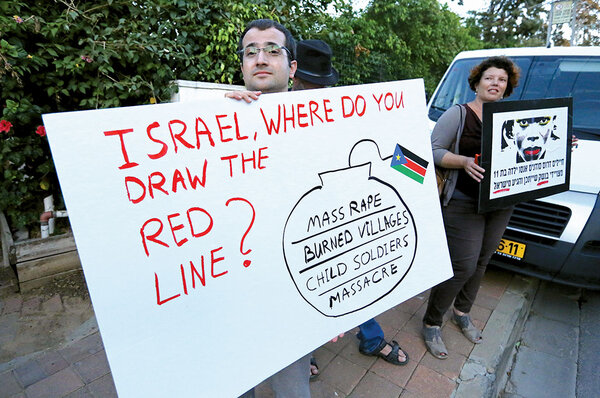 Eitay Mack: Israel seen through its arms trade, video one and a half hours, English

The State of Israel is sending weapons to a country that’s carrying out ethnic cleansing. Once one couldn’t even imagine such a thing, but then it turned out that during the 1990s the Rabin-Peres-Meretz government was selling weapons to the genocidal governments of Rwanda and Serbia.

To send weapons to a government that’s guilty of genocide is very similar to (excuse the comparison) sending weapons to Nazi Germany during the Holocaust. Our leaders nevertheless did this knowingly and desecrated the memory of the Holocaust in the process. It’s important to stress that they turned both you and me into criminals, into accessories to a crime and to abettors of genocide.

In Myanmar there is now a “textbook example of ethnic cleansing” going on, as per the United Nations. Defence Minister Avigdor Lieberman can equivocate and lie, but the bitter reality is sad. Israel is the only democratic country, at least according to press reports, that is still sending weapons to Myanmar. European and North American countries have stopped doing so, even though there is no official embargo.

Eitay Mack, who has for years been leading the struggle against the criminal weapons exports by Israel – not private weapons’ merchants, but the State of Israel – to dubious regimes, petitioned the High Court of Justice to stop the defense exports to Myanmar. His petition was rejected and in an unprecedented move there was a gag order imposed on the full ruling, even though the case was handled in open court.

I had the privilege of submitting petitions with Mack against the sales of weapons by Israel to the murderous regime in Serbia, which conducted ethnic cleansing campaigns in the early 1990s, and at least one massacre in Srebrenica in Bosnia, and another petition against the weapons deliveries to the Hutu government in Rwanda, which conducted the fastest genocide in human history.

One of several displays of skulls of people slaughtered in the 1994 genocide in Rwanda, Photo by BBC/National Geographic

There’s a connection between the rejection of our petitions back then and the current reality. The petitions then were submitted after the fact, regarding crimes that had already been committed. The current petition and struggle is about the present. Today there are children and elderly people being murdered and women raped in Myanmar. There will almost certainly be more tomorrow.

We told the “leftist” High Court that exposing documents under the Freedom of Information Law could signal to the Israeli government that there are limits and restrictions on the sale of weapons to murderous regimes. The petition was rejected on grounds that it would undermine state security and the state’s security exports. But the success of the current struggle can save lives.

I’ve learned one thing from dealing with the Holocaust and genocide, and that’s the sacred value of human life and the equal value of human life, because we are all human beings created in God’s image. When we remember this basic fact, a lot of things become simple.

Prof. Auron is a genocide researcher who works to get the genocides of other peoples recognized.