A waste of euros when Israel blocks state-building 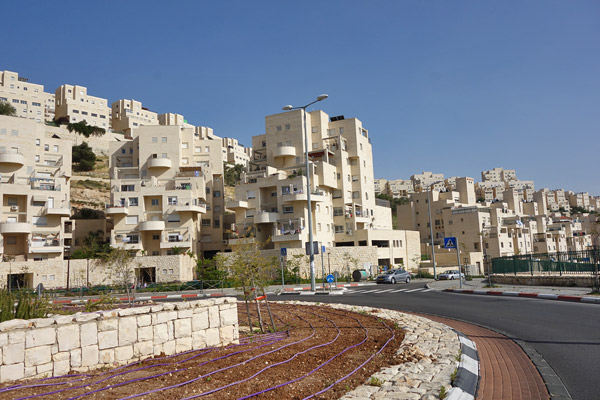 Unidentified settlement portrayed in Huffington Post. They are like ‘gated communities’ rapidly sprouting all over the West Bank.

European frustration with the glacial pace of moves to Palestinian statehood could lead to the bloc’s aid contributions to the region becoming unsustainable in as little as 3-4 years, officials say.

With a €500 million regional aid budget, the EU is the biggest donor to the occupied Palestinian Territories – and its Palestinian Authority (PA) – and this is underwritten by an assumed mutual commitment to the ‘two-state solution’.

But as Israeli Jewish settler numbers in the West Bank have tripled in two decades, the number of Palestinian displaced by demolitions has risen 50% in just the last year, and peace talks have floundered, this assumption is being questioned as rarely before.

“In ‘Area C’ of the West Bank, it is hard to see any trace of Palestinian state-building,” a senior EU source told EurActiv. “Systematic settlement-building is what we see.”

“It is clear that our policy is not sustainable in the medium-term without some form of political breakthrough and money alone has not succeeded in producing that,” said another EU official. “It was meant to accompany a political process, but that’s not really happening.”

Asked how long the ‘medium -term’ was, the official replied: “in my personal opinion, the next 3-4 years. We can’t carry on indefinitely with the money we are expending on Palestine without seeing results from that.”

A recent evaluation report by the European Commission’s Humanitarian Aid and Civil Protection department found that despite EU support, little had been done to remove the most significant barriers to the creation of a Palestinian state. It listed these as “Israeli occupation and settlement policies and the political division of the West Bank and Gaza”.

“Absent effective measures to address these obstacles, the EU is unlikely to achieve its goal of a two-state solution,” it said.

The paper proposed taking a ‘results-based’ approach to aid delivery and disbursement of grants, which is not entirely dismissed by some aid recipients.

“Humanitarian aid in the absence of a political framework is never going to be as effective as using taxpayers money where the humanitarian effort is clearly underpinned by a political process,” Christopher Gunness, a spokesman for the UN relief and works programme (UNRWA) told EurActiv.

“Addressing the underlying cause of the conflict – the blockade and occupation – would clearly mean that European taxpayers’ money was better spent, and emergency assistance would be unnecessary,” he added.

EU assistance to the occupied territories, much of which takes the form of paying the salaries of PA functionaries, has been criticised by some Palestinians for creating an artificial NGO economy in cities such as Ramallah, which distorts local rents and excludes local people.

More generally, they say that it sustains the occupation by footing a bill which Israel, as an occupying power, would otherwise be obliged to pick up.

EU sources counter that the bloc’s aid has maintained a PA presence in difficult circumstances, and allowed UNRWA to provide healthcare, food and schooling to many of the poorest Palestinians.

But within austerity-hit Europe, the wisdom of upholding this state of affairs indefinitely is also being queried by free market-oriented think tanks.

Pieter Cleppe, the director of Open Europe Brussels, told EurActiv that “the EU should monitor closely what happens with EU funds and cease sending them if they yield no results, contribute to enforcing questionable regimes or when it’s apparently very difficult to ensure efficient and accountable spending.”

Cleppe cited an independent audit carried out for the European Commission which could not ascertain how a €40 million grant to the PA in 2007 had been spent.

More grating for the EU has been the issue of compensation from Israel for EU-funded infrastructure projects which its forces have damaged, destroyed or confiscated. The issue is still being discussed in Brussels committee rooms, where legal issues around the ownership of completed projects have slowed the progress of a position to the European Council. But a will to act remains.

“The EU should stand up for its taxpayers and demand compensation from anyone who has destroyed EU-owned infrastructure,” Cleppe said. “If the infrastructure has already been donated and the EU doesn’t own it anymore, then the EU could endorse a claim from the new owner.”

“Member states which are investing their money – particularly in Area C – need to justify to their taxpayers how their money can be wasted like this,” an EU official agreed. “There is awareness among all member states that we need to tackle this question with the Israelis in a systematic way and possibly with a unified position.”

The wider issue, he said, involved the “impossibility” of Palestinians getting permits to build in Area C – the 60% of the West Bank under full Israeli control. By comparison, planning requests for Israeli settlements – such as the 990 acres of Palestinian land near the Gush Etzion settlement block recently appropriated – have faced few problems.

“We have been asking the Israelis for a long time to start allowing Palestinians to build up their waterworks, buildings and shelters without risk of demolition, because otherwise we are in a vicious circle,” the official continued.

Under international humanitarian law, it was “very hard to justify Israel’s demolitions of water wells,” he noted.

A Western diplomat was more outspoken. “This situation is not just unsustainable,” he said. “It’s a total waste of money. Using European taxpayers’ money to build houses which are then levelled by the Israeli army – which is itself subsidised by European tax breaks – is clearly not the way that Europe should be spending its precious tax euros at a time of economic meltdown.”