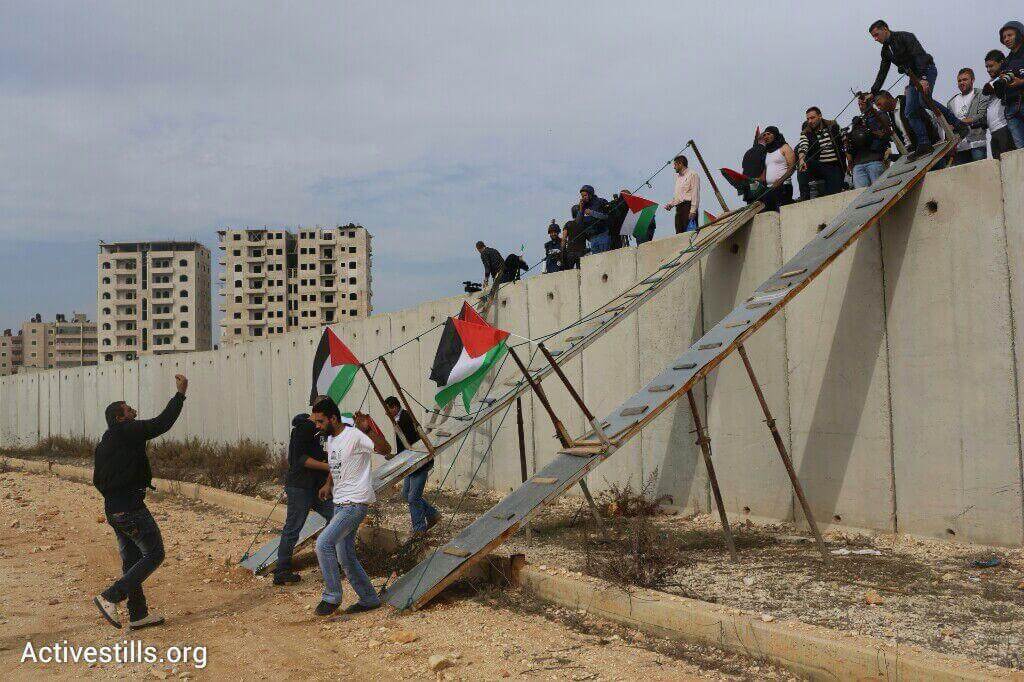 Palestinian activists use a metal ramp to cross the separation wall near the Israeli Qalandiya checkpoint between the West Bank city of Ramallah and Jerusalem, November 14, 2014. The activists were protesting against Israeli authorities allowing settlers to enter the Al-Aqsa mosque compound and Israel imposing restrictions on Muslims wishing to perform Friday prayers at Al Aqsa Mosque. Photo by Oren Ziv/Activestills)

Five Reasons Why 2014 was a Game Changer in Palestine

In terms of losses in human lives, 2014 has been a horrific year for Palestinians, surpassing the horrors of both 2008 and 2009, when an Israeli war against the Gaza Strip killed and wounded thousands.

While some aspects of the conflict are stagnating between a corrupt, ineffectual Palestinian Authority (PA), and the criminality of Israeli wars and occupation, it would also be fair to argue that 2014 was also a game changer to some degree – and it is not all bad news.

To an extent, 2014 has been a year of clarity for those keen to understand the reality of the ‘Palestinian-Israeli conflict’ but were sincerely confused by the contrasting narratives.

Here are some reasons that support the argument that things are changing.

1. A different Kind of Palestinian Unity

Although the two leading Palestinian parties Hamas and Fatah agreed to a unity government in April, little has changed on the ground. Yes, a government was officially established in June, and held its first meeting in October. But Gaza is effectively still managed by Hamas, which has been largely left alone managing the affairs of the Strip after the Israeli war in July-August. Perhaps Mahmoud Abbas’s authority is hoping that the massive destruction would weaken Hamas into political submission, especially as Egypt continues to seal shut the Rafah border.

But while the factions are failing to unite, the Israeli war on Gaza has inspired a new impetus of struggle in the West Bank. Israeli plans of targeting holy sites in Jerusalem, particularly the al-Aqsa Mosque, coupled with the deep anguish felt by most Palestinians over the massacres carried out by Israel in Gaza, are slowly reverberating into a wave of mini-uprisings. Some speculate the situation will eventually lead to a massive Intifada that will engulf all of the territories. Whether a third intifada takes place in 2015 or not, is a different question. What matters is that the long-orchestrated plot to divide Palestinians is breaking apart and a new collective narrative of a common struggle against occupation is finally forming.

The debate regarding what form of resistance Palestinians should or should not adopt is being sidelined and settled, not by international do-gooders, but by Palestinians themselves. They are opting to use whatever effective form of resistance they can that could deter Israeli military advances, as resistance groups have actively done in Gaza. Although Israel’s latest war killed nearly 2,200 and wounded over 11,000 Palestinians that were mostly civilians, nevertheless, it has still failed to achieve any of its declared or implied objectives. It was another reminder that sheer military strength is no longer the only overriding factor in Israel’s conduct towards Palestinians. While Israel brutalized civilians, the resistance killed 70 Israelis, over 60 of whom were soldiers; this was also an important step testifying to the maturity of Palestinian resistance, which had previously targeted civilians during the second intifada and reflected more desperation rather than a winning strategy.

The legitimization of the resistance was to a degree, reflected in the recent decision by the European court to remove Hamas from its list of terrorist organizations.

Resistance in the West Bank is taking on other forms. Although it is yet to mature into a steady campaign of anti-occupation activities, it seems to be forming an identity of its own that takes into account what is possible and what is practical. The fact is that the ‘one size fits all’ modes of resistance debate is becoming less relevant, giving way to an organic approach to resistance devised by Palestinians themselves.

Another form of resistance is crystallizing in the Boycott, Divestment and Sanctions Movement (BDS) which continues to grow, gathering steam, supporters and constant achievements. Not only was 2014 a year in which BDS managed to win the support of numerous civil society organizations, academicians, scientists, celebrities and to reach out to people from all walks of life, it did something else that is equally important: It normalized the debate on Israel in many circles around the world. While any criticism of Israel was considered a taboo in yesteryear, it has been forever broken. Questioning the morality and practicality of boycotting Israel is no longer a frightening subject, but is open for debate in numerous media outlets, universities and other platforms.

2014 has been a year that made the discussion of boycotting Israel more mainstream than ever before. While a critical mass is yet to be achieved in the US, the momentum is constantly building up being led by students, clergy men and women, celebrities and ordinary people. In Europe, the movement has been hugely successful.

4. Parliaments are Feeling the Heat

While, traditionally, much of the southern hemisphere offered unconditional support for Palestinians, the West conceitedly stood with Israel. Following the Oslo accords, a bewildering European position evolved, where they flirted with finding the ‘balance’ between an occupied nation and the occupier. At times, the European Union (EU) timidly criticized the Israeli occupation, while continuing to be one of Israel’s largest trade partner, providing weapons to the Israeli army, who then use them to carry out war crimes in Gaza and sustain its military occupation in the West Bank. 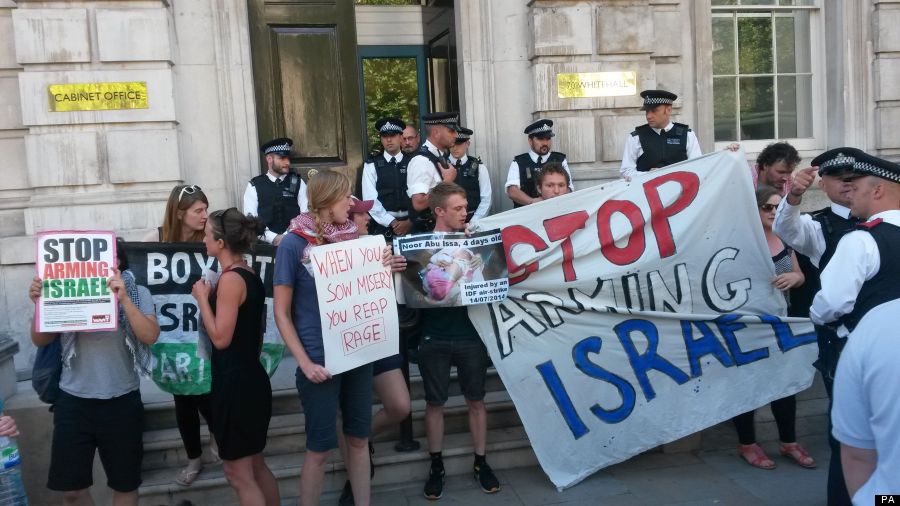 This debauched policy is being challenged by citizens of various European countries. The Israeli summer war on Gaza exposed Israel’s human rights violations and war crimes like never before, revealing along the way EU hypocrisy. To relieve some of the pressure, some EU countries appear to be taking stronger stances against Israel, reviewing their military cooperation, and more boldly questioning the right wing policies of Israeli Prime Minister Benjamin Netanyahu. A spate of parliamentary votes followed, overwhelmingly voting to recognize Palestine as a state. While these decisions remain largely symbolic, they represent an unmistakable shift in EU attitude towards Israel. Netanyahu continues to rail against European ‘hypocrisy’, assured, perhaps, by Washington’s unconditional support. But with the US losing control over the tumultuous Middle East, the Israeli prime minister might soon be forced to rethink his obstinate attitude. 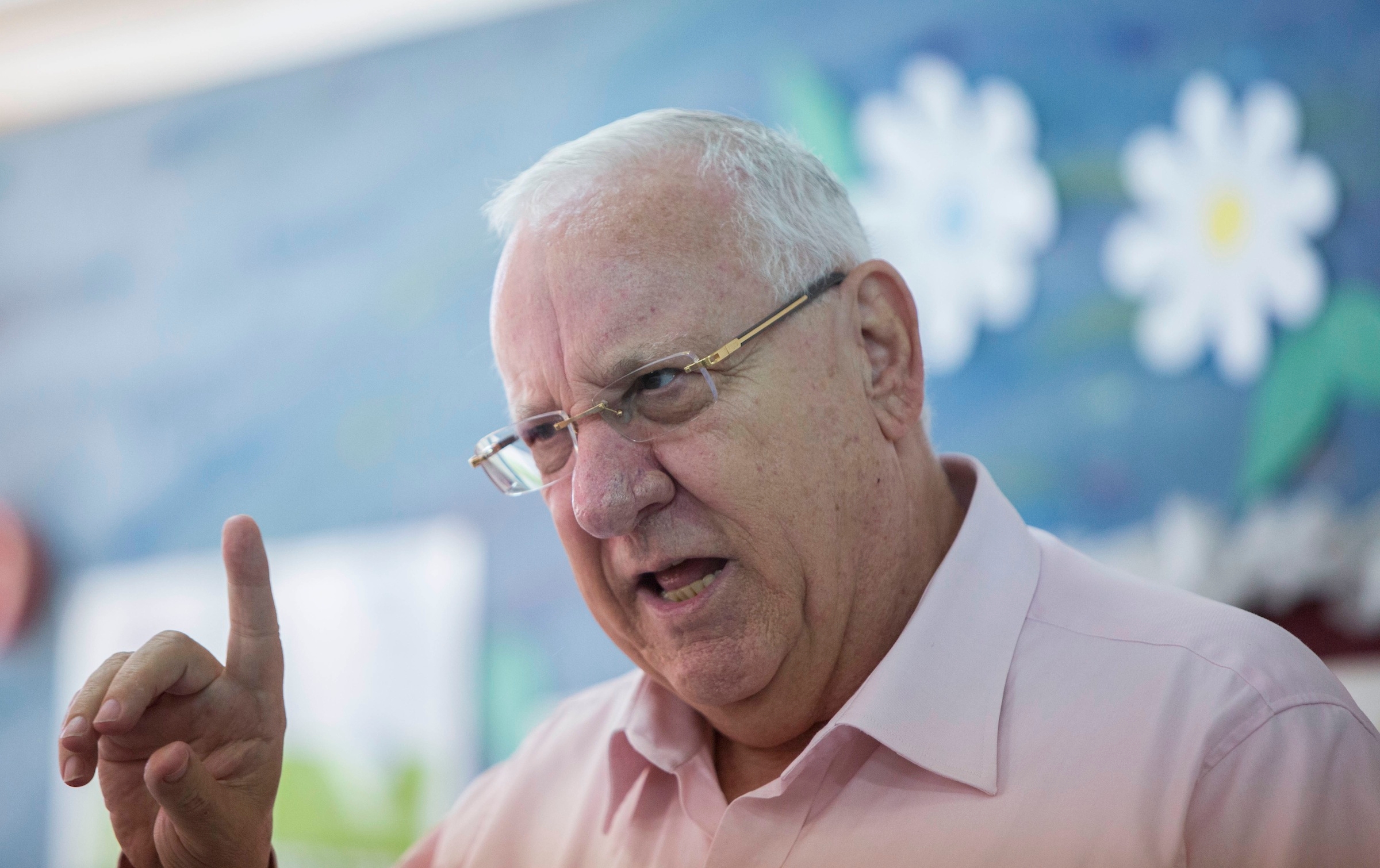 Israel’s new President Reuven Rivlin, was the surprise critic of Israel’s proposed Basic Law, ‘a hierarchical approach, which places Jewishness before democracy, misses the great significance of the declaration of independence, which combined the two elements.’ He also denounced the sickness of bigotry in Israel.

For decades, Israel defined itself as both a democratic and Jewish state. The objective was clear: to maintain Jewish superiority over Palestinian Arabs, while continuing to present itself as a modern ‘western’ democracy – in fact, the ‘only democracy in the Middle East.’ While Palestinians and many others were never sold on the democracy charade, many accepted the dichotomy with little questioning.

While Israel doesn’t have a constitution, it has a ‘code’, called the Basic Law. Since there is no Israeli equivalent to a ‘constitutional amendment’ – the Netanyahu government is pushing for a new law at the Israeli parliament, the Knesset. This will basically put forth new principals under which Israel will define itself. One of these principals will define Israel as ‘the national state of the Jewish people’, thus casting all non-Jewish citizens of Israel as lesser citizens. While, for all intents and purposes, Palestinian citizens of Israel have been treated as an outcast, and discriminating against in many ways, the new Basic Law will be a constitutional confirmation of their state-enforced inferiority. The Jewish and democratic paradigm is dying for good, exposing Israel’s reality the way it is.

Certainly 2015 will bring much of the same: The PA will fight for its own existence, and try to maintain its privileges, bestowed by Israel, the US and others by using every tool available; Israel will also remain emboldened by American funds and unconditional support and military backing. Yes, the next year will also prove frustratingly familiar in that regard. But the new, real and opposing momentum will unlikely cease, challenging and exposing the Israeli occupation, on one hand, and sidestepping the ineffectual, self-serving Palestinian Authority on the other.

2014 was a very painful year for Palestine, but also a year in which the collective resistance of the Palestinian people, and their supporters, proved too strong to bend or break. And in that, there can be much solace.

Ramzy Baroud is an internationally-syndicated columnist, a media consultant, an author and the founder of PalestineChronicle.com. His latest book is My Father Was a Freedom Fighter: Gaza’s Untold Story (Pluto Press, London).