Palestinians in Syria dying of starvation 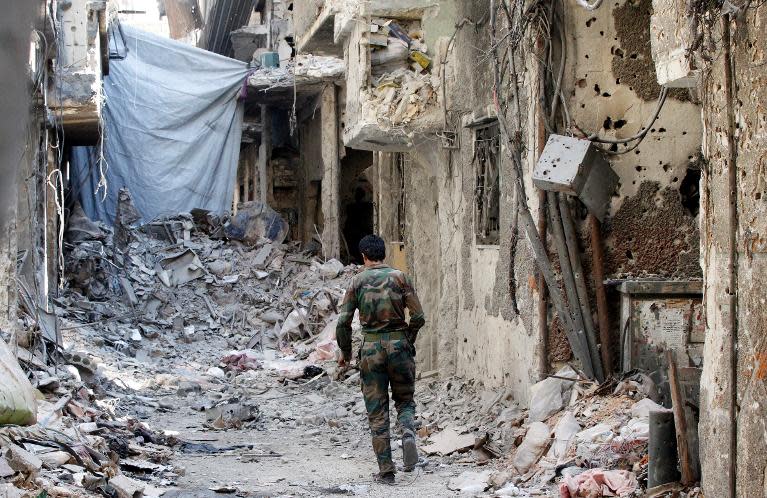 Fighter from the Popular Front for the Liberation of Palestine General Command in Yarmouk refugee camp.Photo by Anwar Amro / AFP

But some 20,000 Palestinian refugees in the Yarmouk suburb of Damascus have faced an even worse fate, besieged by the Syrian army since the summer without access to food, medicine or other supplies.

In November, a tentative agreement to vacate armed groups from the camp collapsed, prolonging the grim situation.

Since September, 15 Palestinians in the area have died of starvation according to reports cited by Chris Gunness, spokesman for UNRWA, the UN agency for Palestine refugees.

Palestinian refugees from Syria protest against UNRWA in Gaza. Such protests – this one last October – have become commonplace as UNRWA is the only international authority with a significant presence in the oPt.

“The continued presence of armed groups that entered the area at the end of 2012 and its closure by government forces have thwarted all our humanitarian efforts,” Gunness told Ma’an News Agency this week.

The BBC’s Lyse Doucet reported on 20 December that pictures from inside Yarmouk “showed street markets with only radishes for sale.”

Earlier this month, UNRWA Commissioner-General Filippo Grandi warned “that humanitarian conditions in the besieged refugee camp of Yarmouk are worsening dramatically and that we are currently unable to help those trapped inside.”

“If this situation is not addressed urgently, it may be too late to save the lives of thousands of people including children,” Grandi said.
Rapid deterioration

Before the war in Syria, Yarmouk, established as an “unofficial” refugee camp in 1957, was home to some 160,000 Palestinians as well as tens of thousands of Syrians.

Although not entirely spared from the fighting and shelling, the situation deteriorated sharply in December 2012 and the months since when, according to UNRWA, “armed conflict has caused at least 140,000 Palestine refugees to flee their homes in Yarmouk, as armed opposition groups established a presence in the area, with government forces controlling the periphery.”

Until July this year, UNRWA says those remaining behind could still access its “assistance at the Zahera entrance to Yarmouk. However, from mid-July 2013, Palestine refugees have been trapped in the area, with little or no access or freedom of movement.”

Below: Yarmouk Palestinian refugee camp, #Damascus, 27th December2013: Five Palestinian residents of Yarmouk camp died of starvation due to the regime siege today, Friday December 27th, 2013. This elderly gentleman, Fayyez Saadiya, was one of them. Photo and caption from Palestinians in Syrian situation

The turning point came on 16 December 2012 last year when, as the BBC reported, “government warplanes bombed Yarmouk for the first time,” after the opposition Free Syrian Army (FSA) “sought to seize control of the camp from the PFLP-GC. Some were reportedly killed when a rocket struck a mosque where people had taken shelter.”

Various reports put the number of people killed in the attack at around two dozen.

In the days following the bombing, tens of thousands of Palestinians fled the camp leaving everything behind, with thousands heading to Lebanon, as warnings broadcast from mosques gave people just hours to leave.

In a February 2013 interview in Beirut, Yarmouk resident and activist Mutawalli Abou Nasser told The Electronic Intifada’s Moe Ali Nayel about the situation in the camp over the previous two years before the December 2012 bombing and the mass exodus.

According to Abou Nasser, while some youth in the camp organized in support of the Syrian opposition, “Yarmouk remained neutral the first year of the Syrian revolution,” amid “public awareness and consensus that the camp should be left out” of the conflict.

But according to Abou Nasser the situation began to shift when members of the PFLP-GC fired on camp residents holding funerals for family members killed by Israeli forces as they took part in a march at the border in June 2011 commemorating the 1967 war.

Camp residents had accused people loyal to the government of encouraging youth from the camp to go to the border and face grave danger as part of a propaganda effort for the government.

Fourteen residents were reported killed and dozens more injured in the shootings allegedly by the PFLP-GC.

In December 2012, FSA fighters entered the camp in order to fight the PFLP-GC.

“The residents of the camp were against the FSA stationing in it,” Abou Nasser said. “I personally rejected the FSA entering the camp. The camp had a humanitarian role; bringing the war to the middle of it was a mistake.”

The situation started deteriorating six days after the FSA entered the camp: there was no bread anymore, [and] a shortage of all the medical supplies needed by the four field hospitals in the camp.

Before the FSA involved the camp in its war the camp was a humanitarian phenomenon: rents stayed cheap, there was plenty of food, and the medical support the camp offered saved many lives. Only the Islamists in the camp were in favor of the FSA stationing in Yarmouk.

By last October, refugees in Yarmouk were reduced to eating ‘bread’ made from old lentils.

But that opposition softened after the December 2012 bombing by government warplanes.

“People must understand that the indiscriminate bombing of the camp by the regime – killing innocent people, children in their playground – made the FSA’s idea more acceptable to Palestinian residents of the camp,” Abou Nasser explained.

“The more the MiGs [warplanes] bombed the camp, the more people wanted the FSA to stay.”

For a year, the situation has been getting worse. This November a tentative agreement gave hope for some relief in the situation in Yarmouk.

Under the reported terms of the agreement, brokered by the Palestine Liberation Organization, armed men would have left the camp and displaced residents would have been given safe passage to return and rebuild.

The reality for Palestinians whether trapped in Yarmouk or seeking refuge elsewhere is that they have little control over their fate.

Um Muhammad is a Palestinian who left Yarmouk for Lebanon seeking treatment for her 14-year-old son who suffered a serious head injury during the December 2012 government air attacks on the area.

In May, she told The Electronic Intifada’s Moe Ali Nayel of the plight she faced trying to get help.

When she took her son to a government-controlled hospital, she said, “they wanted me to sign a paper stating that my son was injured by the terrorists but I refused and told them the terrorists don’t have MiGs.”

The pressure can also come from the rebels. A Palestinian woman who survived an 11 October sinking of a refugee boat told Human Rights Watch, “We could not stay in Syria. I could not send the children to school, because [both sides] ask which side you support and, if you answer wrongly, they will kill you.”

Such lack of safety and protection for Palestinian refugees has driven large numbers to flee Syria, with an estimated 80,000 now in Lebanon, 20,000 in Jordan and 1,200 in Gaza.

As many as hundreds of Palestinians fleeing Syria have died at sea or faced dire conditions and scapegoating in Lebanon.

Thousands have faced persecution at the hands of Egypt’s military coup regime.

Without an end to the war in Syria there is as little hope for Palestinian refugees there as for millions of Syrians whose lives have been devastated by the conflict.

In the meantime, UNRWA has launched a $400 million international appeal to support its relief efforts for Syria’s Palestine refugees.

But no amount of aid will do any good if people can’t get access to it.

International aid workers say that while the government officially claims that they can have access to any part of the country, in practice it places many obstacles in their way.

In September, Peter Maurer, president of the Intenational Committee of the Red Cross, stressed his organization’s need for “rapid and unimpeded passage of humanitarian relief for people in sealed off areas, mainly Eastern Ghouta, the old city of Homs, Yarmouk and Moadamiyah.”

Maurer has also recently said both government and armed opposition block medical aid to the sick and wounded: “On both sides we are struggling with the argument that whatever medical aid is brought to one part or the other is interpreted as an indirect military support to the other side.”

But in the case of Yarmouk, no one disputes that government forces control the periphery and therefore have the power to grant the humanitarian access UN officials have been urging without success.

There can be no possible excuse or justification for the Syrian government to deny food and supplies to Yarmouk camp and other besieged areas.

To use food as a weapon is an abominable crime.

U.N. seeks access to Palestinians in Syria after 15 die of hunger

The United Nations appealed on Monday for the Syrian army and rebel fighters to allow urgent aid to reach a Palestinian district of southern Damascus where it said 15 people have died of malnutrition in recent months.

U.N. Relief and Works Agency (UNRWA) spokesman Chris Gunness said five Palestinian refugees died in the Yarmouk district over the weekend. Ten others have died since September, the last time the U.N. was able to deliver aid to Yarmouk.

“The situation has progressively deteriorated for some 20,000 Palestinians trapped inside Yarmouk,” he told Reuters.

“The continued presence of armed groups that entered the area at the end of 2012 and its closure by government forces have thwarted all our humanitarian efforts.”

Syria is home to half a million Palestinians, refugees of the 1948 conflict which led to the creation of the state of Israel. Before the 2011 uprising against President Bashar al-Assad, many of them lived in the Yarmouk neighborhood on the southern edge of the Syrian capital.

But the 2011 protests led to a civil war which has driven out most Yarmouk residents, forcing them once again into homelessness. Those that remain in Yarmouk have been trapped by the fighting for months.

“If this situation is not addressed urgently, it may be too late to save the lives of thousands of people including children,” Gunness said.

“We urgently ask all parties to immediately heed their legal obligations and facilitate the urgent provision of humanitarian assistance to Yarmouk and other Palestinian refugee camps where fighting impedes the delivery of such assistance.”

A video uploaded by activists on Sunday showed people crowded around an UNRWA official, asking about aid deliveries.

“We just want this situation to end,” one resident said. “We want the roads to be open for us, for people to come in and out safely … We can’t tolerate it any more.”

Tens of thousands of Syrians are trapped in other besieged districts. In the Mouadamiya suburb southwest of Damascus, government forces and rebel fighters agreed a brief truce last week to allow food to be brought in.

Palestinians in Syrian situation Facebook page
“This is an independent media page that will try to spread info in English about the situation of palestinian camps in Syria, we will try to do our best to be neutral and show the reality of what is happening in Syria.”